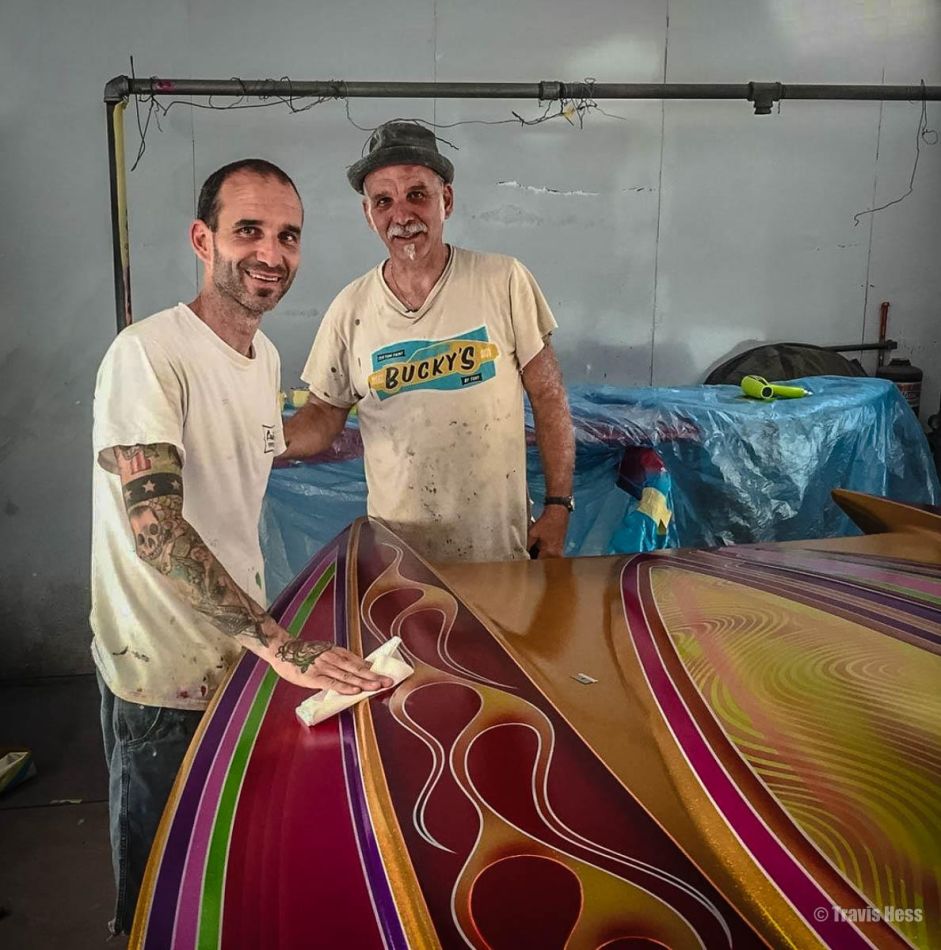 Being into cars, hot rods, drag racing, what made you decide to look into BMX bikes too?
Travis Hess: I think for me it was the early racing innovation that made me attracted to the early BMX era..like I love how Redline, Champion, Gary Turner etc were building flat track bikes, drag cars and stuff and then their kids wanted to race BMX.

Did you run into BMX bikes while looking for car stuff?
Travis Hess: No, I went down this deep rabbit hole from Schwinns. I got my first Stingray in like 1995/6 and my Dad and me were way into them In mid 2000s. Then you know how it goes, you drift into other 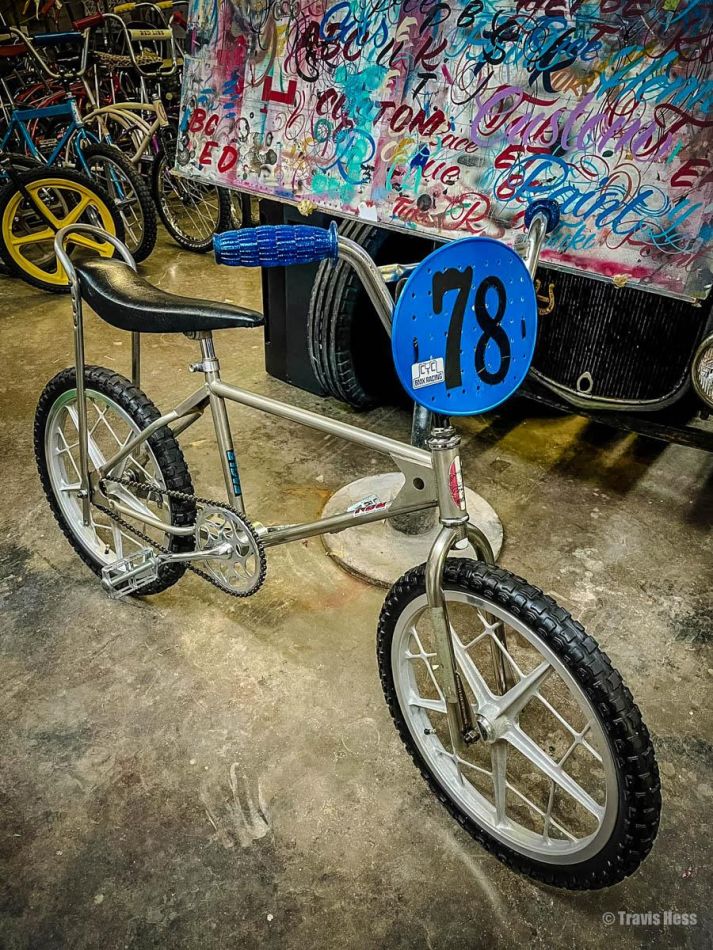 stuff..so covid comes and we can’t race so I go to my moms to get bikes out after sitting 20 years and start messing with bikes again..somehow I came across motomags and how Skip Hess had Cragar cast them and all and I had to have a set..I drove 3 hours to buy a beat Mathews mono shock to get the motomag 1s off it and I put them on my one Stingray and that’s what led me down this rabbit hole..

The bikes you have are from the early days of BMX. Bikes that are hard to find. Do you think it's important to preserve these bikes?
Travis Hess: Yea I do. Just like most stuff I collect is from another time. I think for most collectors it’s fun to look back at another era or with BMX, a lot of guys are reliving it. I really have no reason to collect the early stuff, I was born when it was taking off, ha. 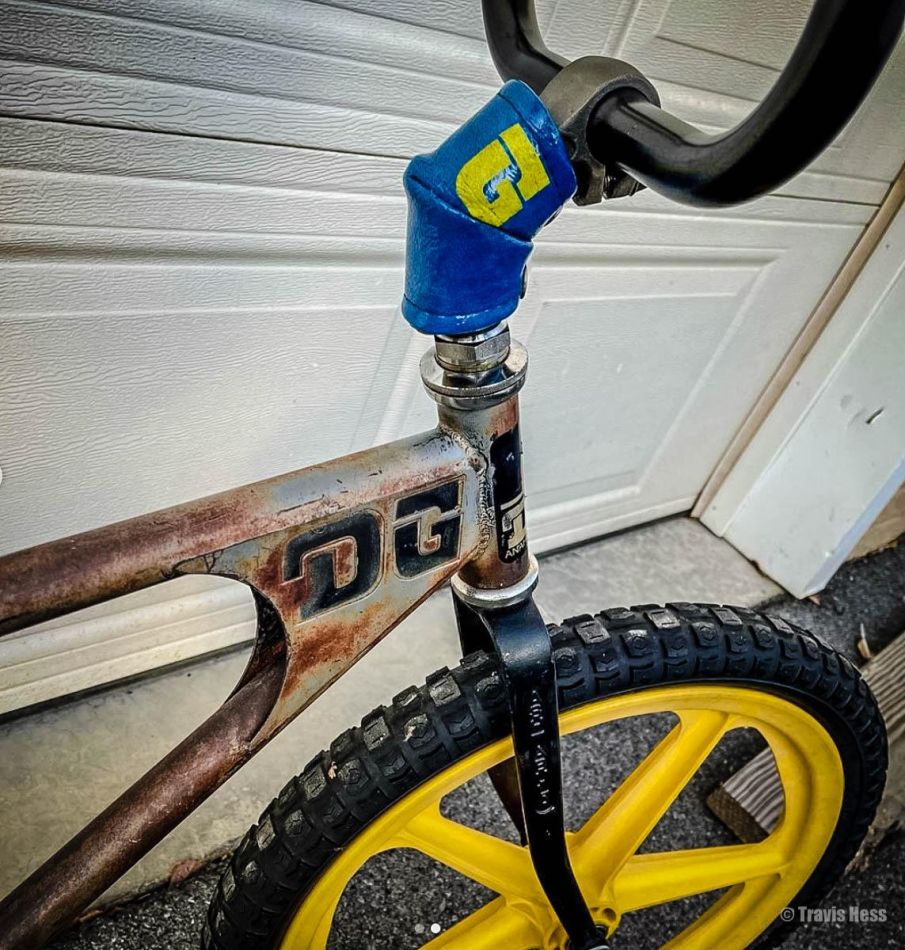 Patina or a layer of fresh paint?
Travis Hess: 100% patina. I don’t want any restored bikes.. To me that’s my favorite part of builds. Putting together era correct parts with matching patina.

Would a good metal flake paint job be better for a helmet or for a BMX bike?
Travis Hess: Either would work great. I metalflaked that Mathews frame I got for the motomags. It was junk so it was fun to flake it.

At this moment, do you wish you had started collecting BMX earlier?
Travis Hess: I do actually.... one reason I missed a lot of stuff that is now in locked up collections. Plus the money the stuff brings now is crazy. I got in right when it seemed to go nuts. 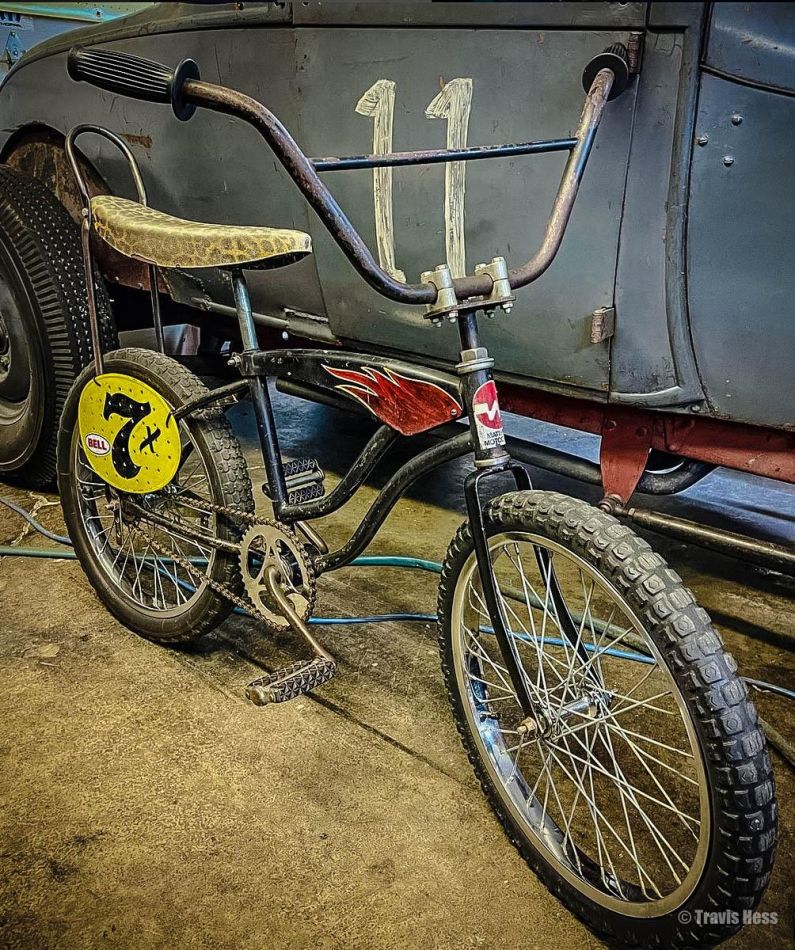 What websites/people do you use for reference to obtain more info on BMX bikes from a certain era? Is there anywhere in particular that you go to?
Travis Hess: I search a lot of orig ads. And of course the Museum and the Facebook groups are the only reason I keep my Facebook. The groups are a huge aspect of this hobby in my opinion..one guy in particular I’d like to mention is Jason Teraoka..I found him on Instagram and he’s been my go to for questions etc. and always real helpful and not an elitist if you know what I mean.

Do you see any connection between the car and bike scenes?
Travis Hess: I think so. If you look back. A lot of these guys were drag racers. Fab guys etc. So that’s kinda what got me excited about early Mongoose and how Skip was friends with McEwen etc..so neat..and most guys have cars or hotrods that collect bikes. 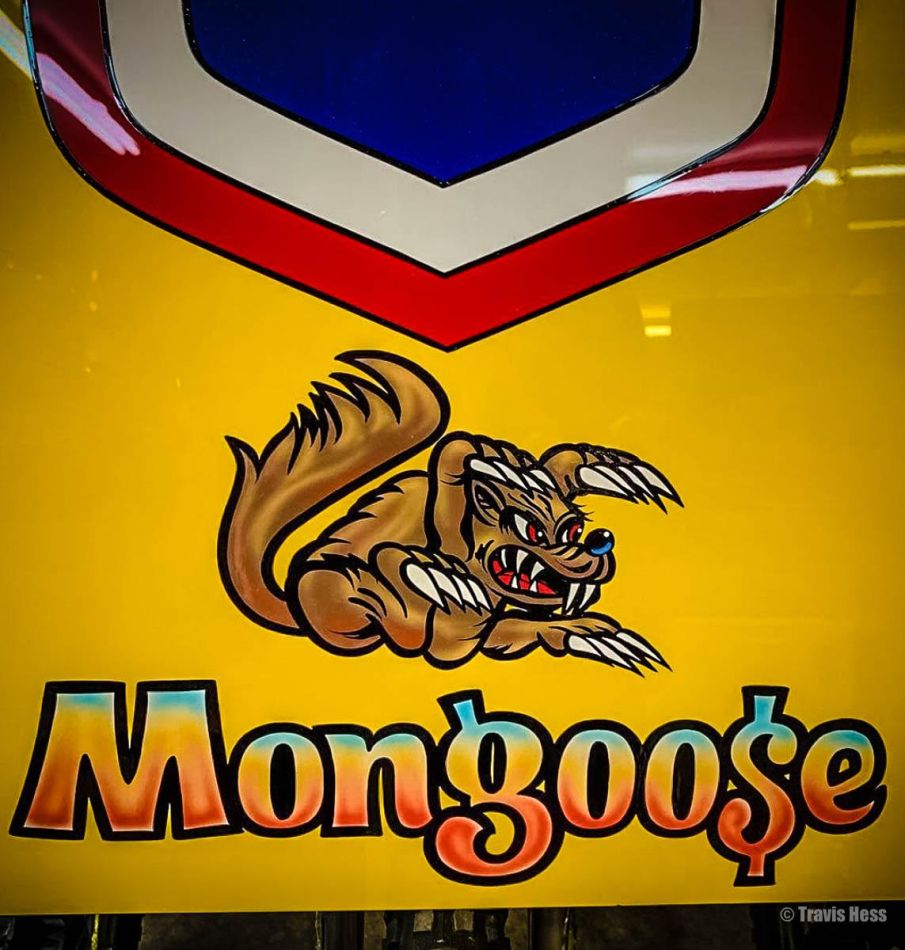 What's the best dumpster dive you've ever done?
Travis Hess: I’ve actually never been that lucky..I do know a guy by me that pulled a mint Motomag bike out of the dumpster.

When you started riding BMX, what bike was the dream bike for you?
Travis Hess: Honestly I only had one BMX. A 1986 GT Pro Performer I got for Christmas that year. Funny thing, my parents just got me almost the exact bike this year for Christmas 35 years later. So I was 10-11 and also riding dirt bikes so that was my only real BMX. 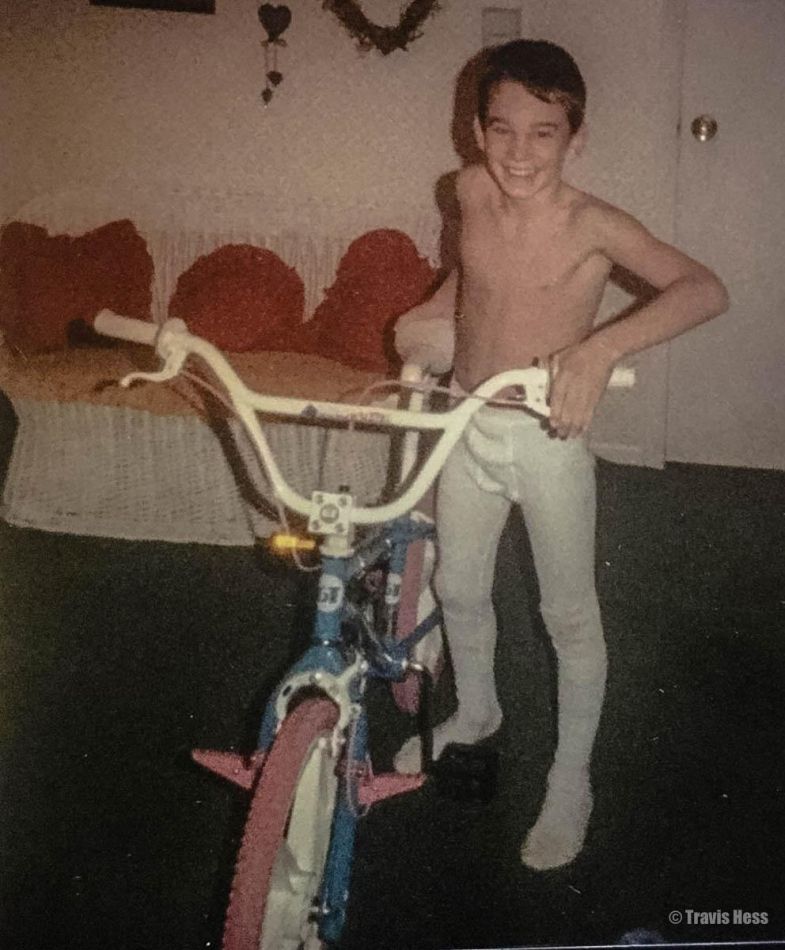 How often do you look on eBay/Craigslist/BMX Museum to shop for old BMX stuff?
Travis Hess: Everyday. Multiple times? I guess I’m a bit obsessive with stuff.

Do you go to swap meets often?
Travis Hess: A few. There’s really nothing by me local. One in Maryland coming up and I’ll drive 4 hours to NJ in the summer again I hope.

Do you have a BMX hero from the past?
Travis Hess: I think ever since I watched Joe Kid; Scot Breithaupt Is like someone that was way ahead of his time..and I still get bummed when I see or someone mentions his tragic death. So sad.

Is there any bike or bike part in particular that you are searching for?
Travis Hess: I think I’m out of room now ha. But I’d love to have a Scherma or first gen Webco. A Kenny Roberts is up there too..Also an early Redline stem is on the list 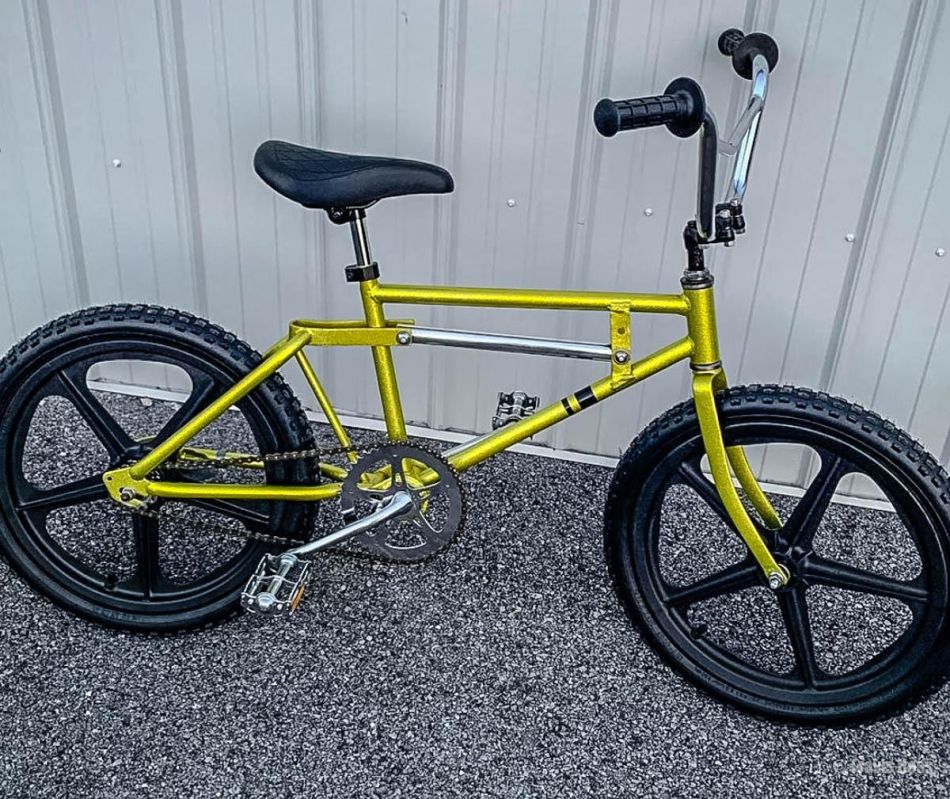 Where can people contact you if they have one that they want to part ways with?
Travis Hess: My Instagram is one I’m always on posting my paint and bikes @tukipaintsit

Thanks to: My wife for letting me mess with kids bikes. 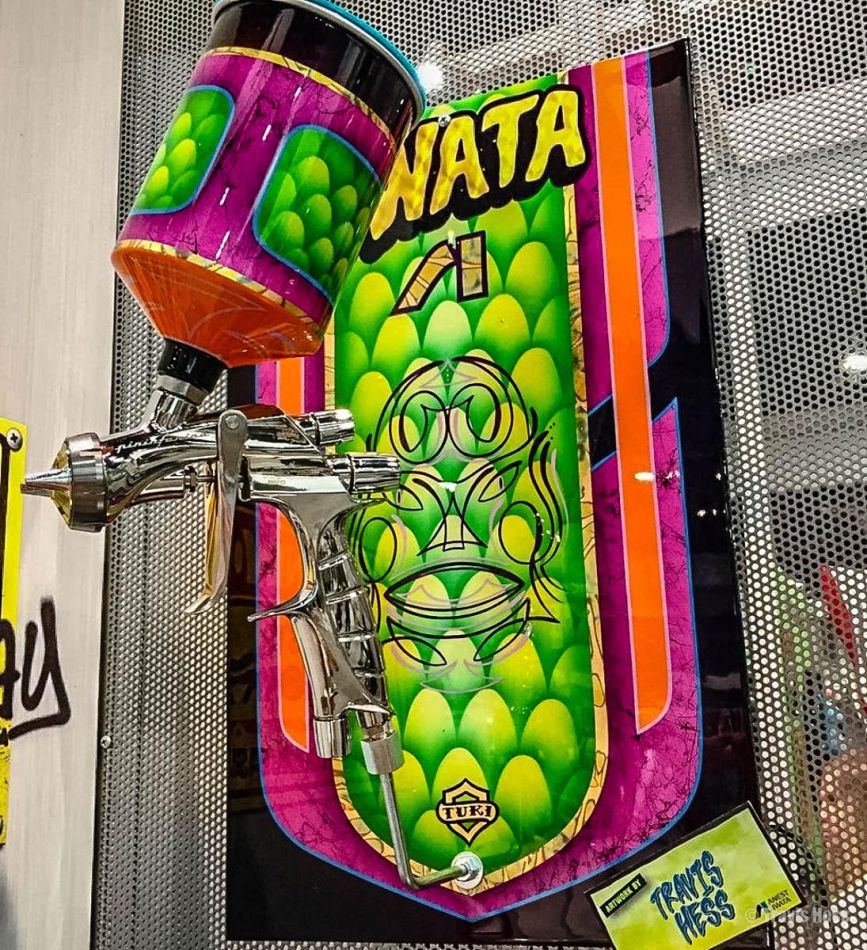 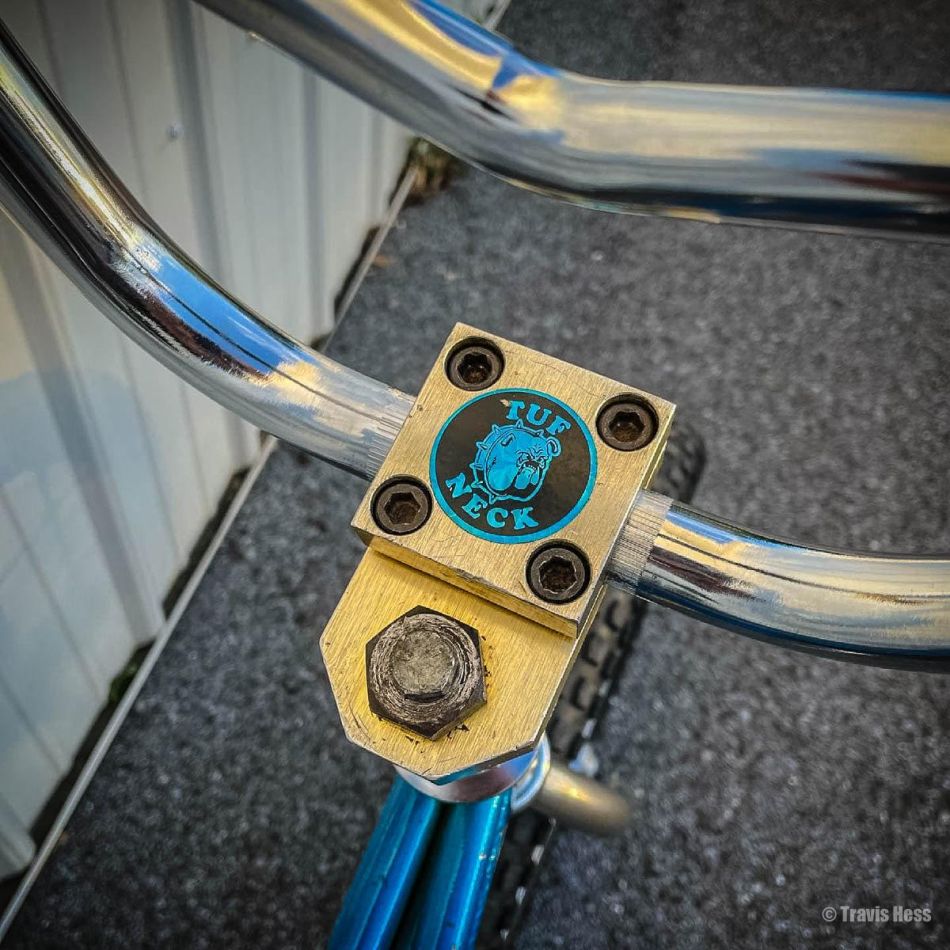 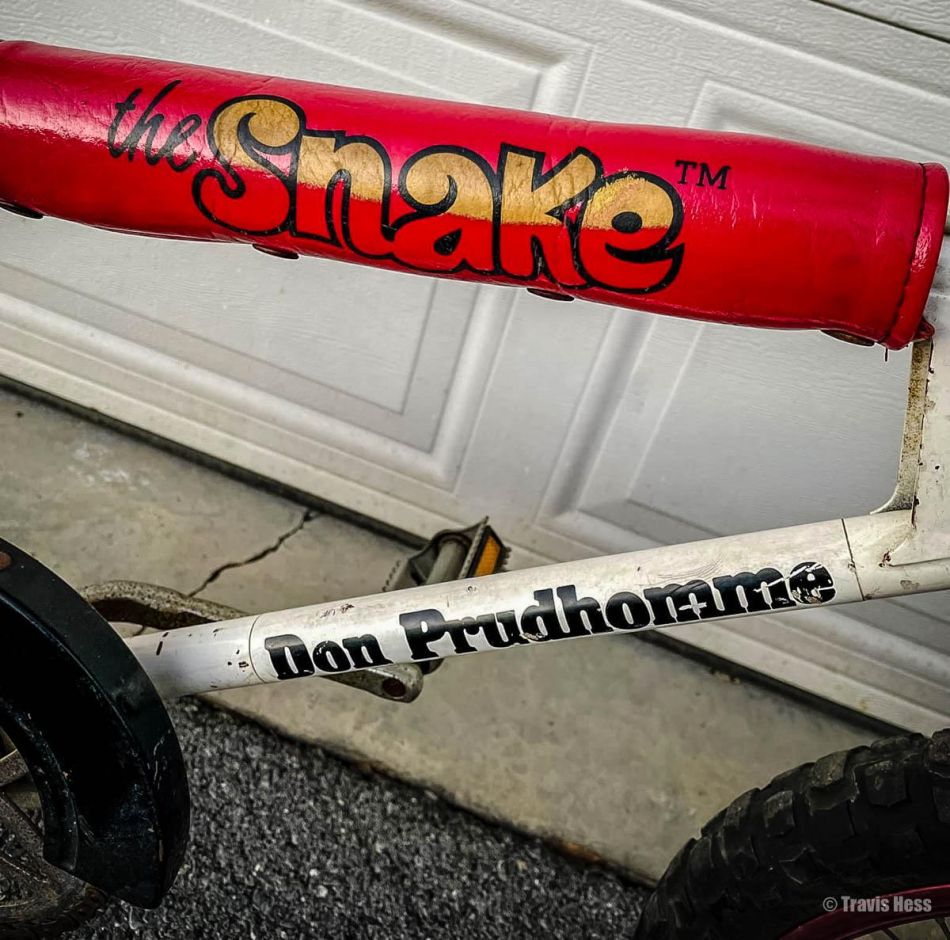 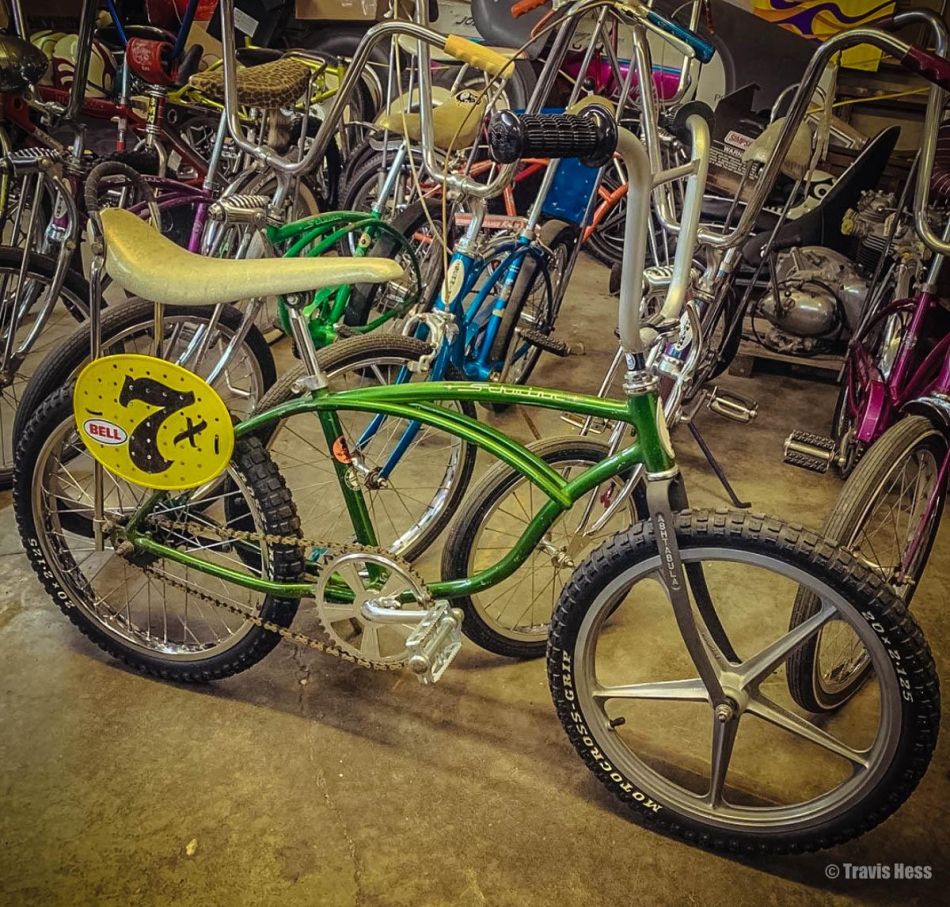 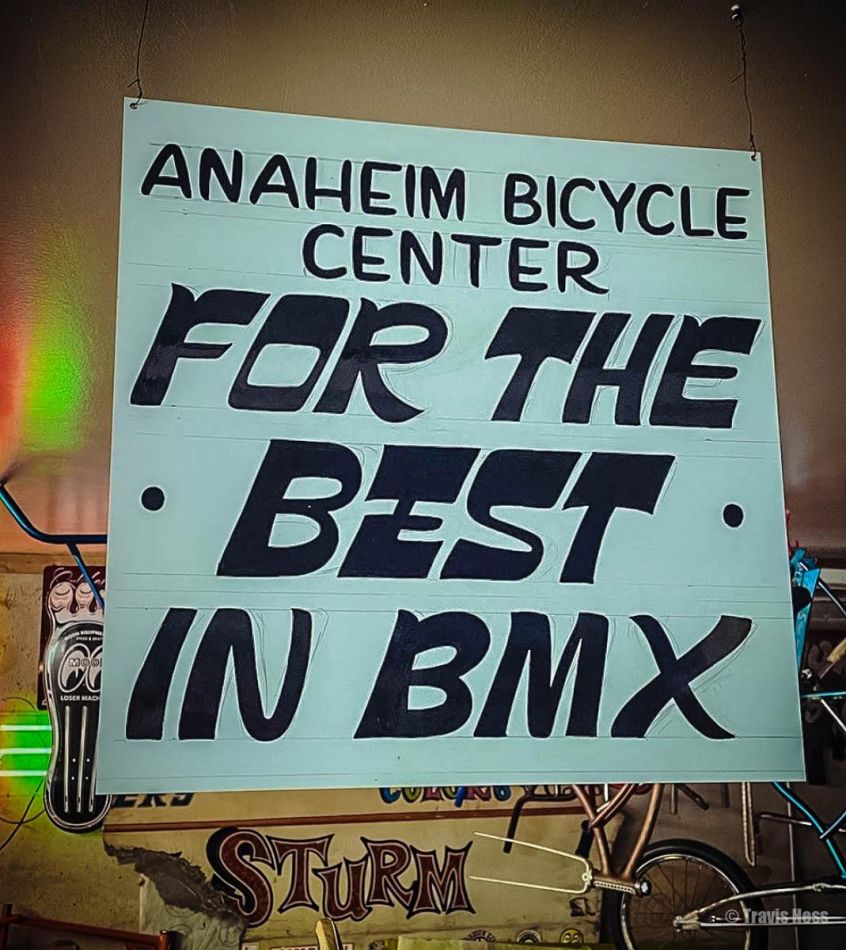 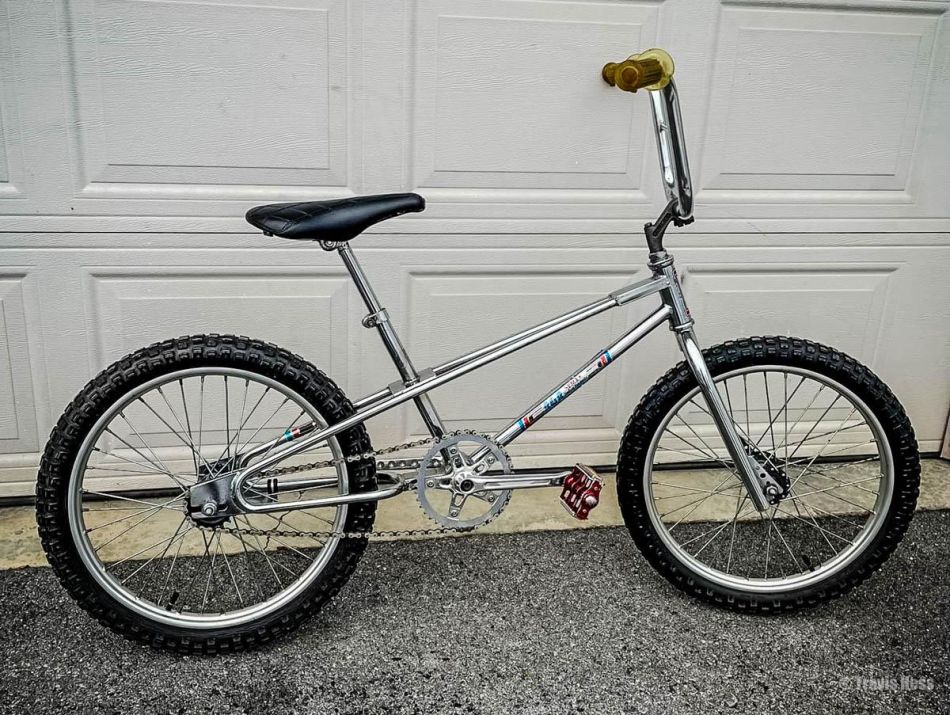 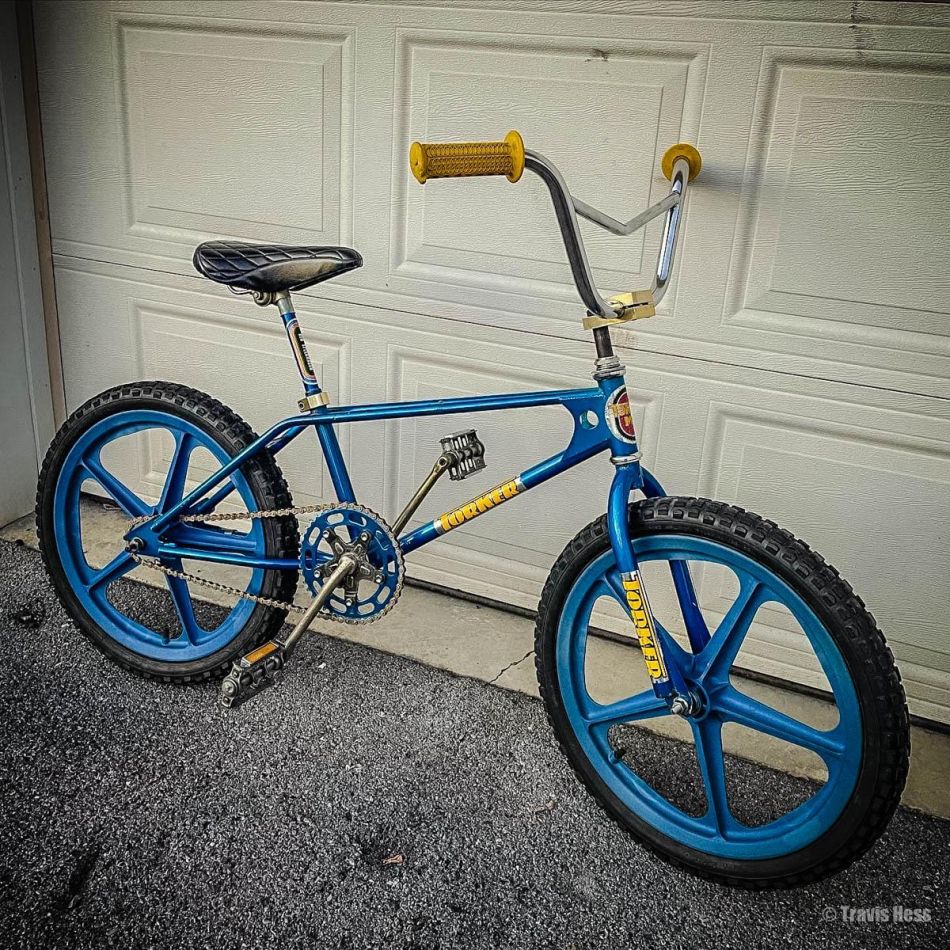 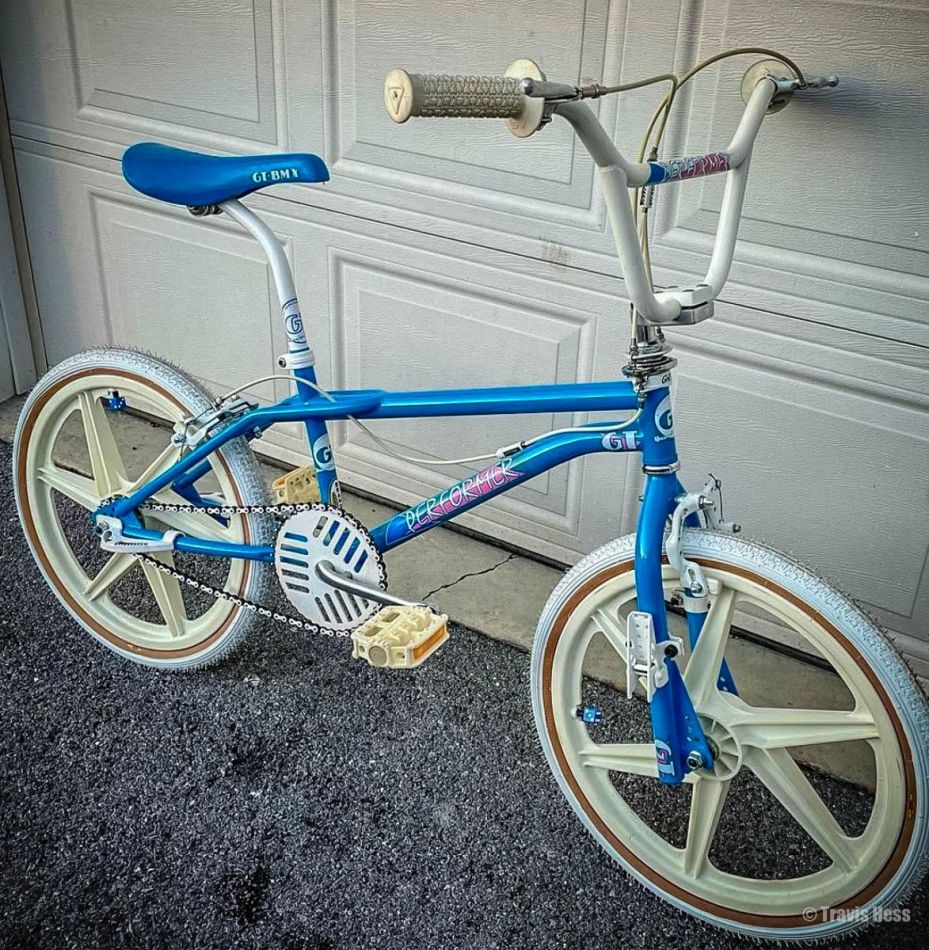 More in this category: « Flip through issue 02 of the infamous FAT-'zine Panaracer Freestyle Tires update »
back to top