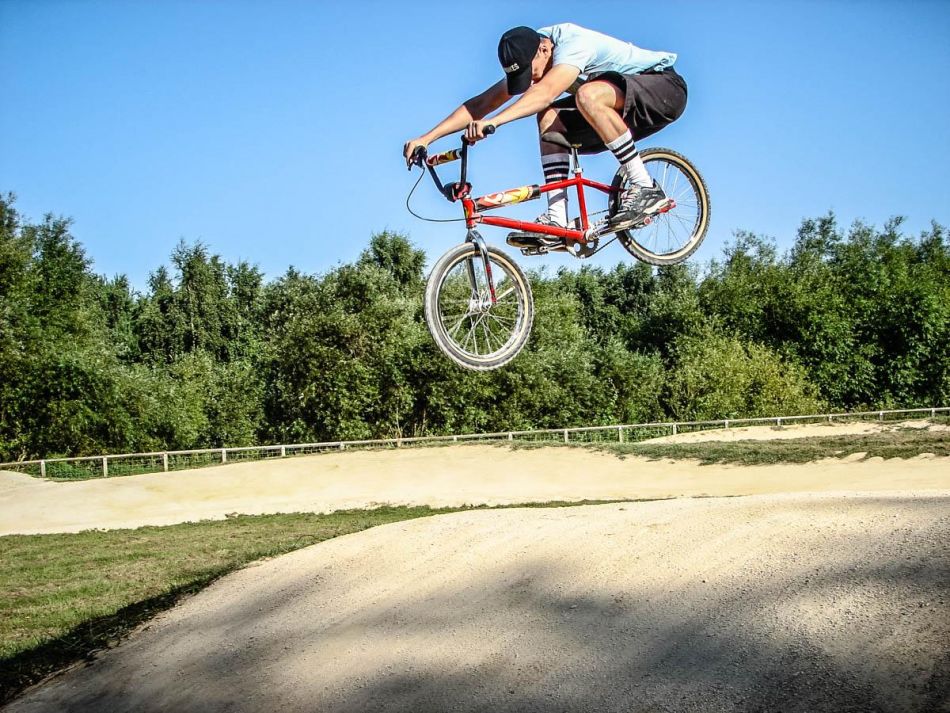 Do you have any other brand of BMX bike in your collection other than an S&M?
Alex Leech: I have one BMX that’s not S&M; a Haro “84 Sport”. I had one in 1984 so I wanted to get another one. The one I used to have was a USA made Gen2 Sport. I rode it for ages and it broke many times. Unfortunately, I have no clue where it ended up. The one I have now is a Gen3, so not exactly the same as my old one. It isn’t built the same as I rode mine but it’s got a few references to my old bike. 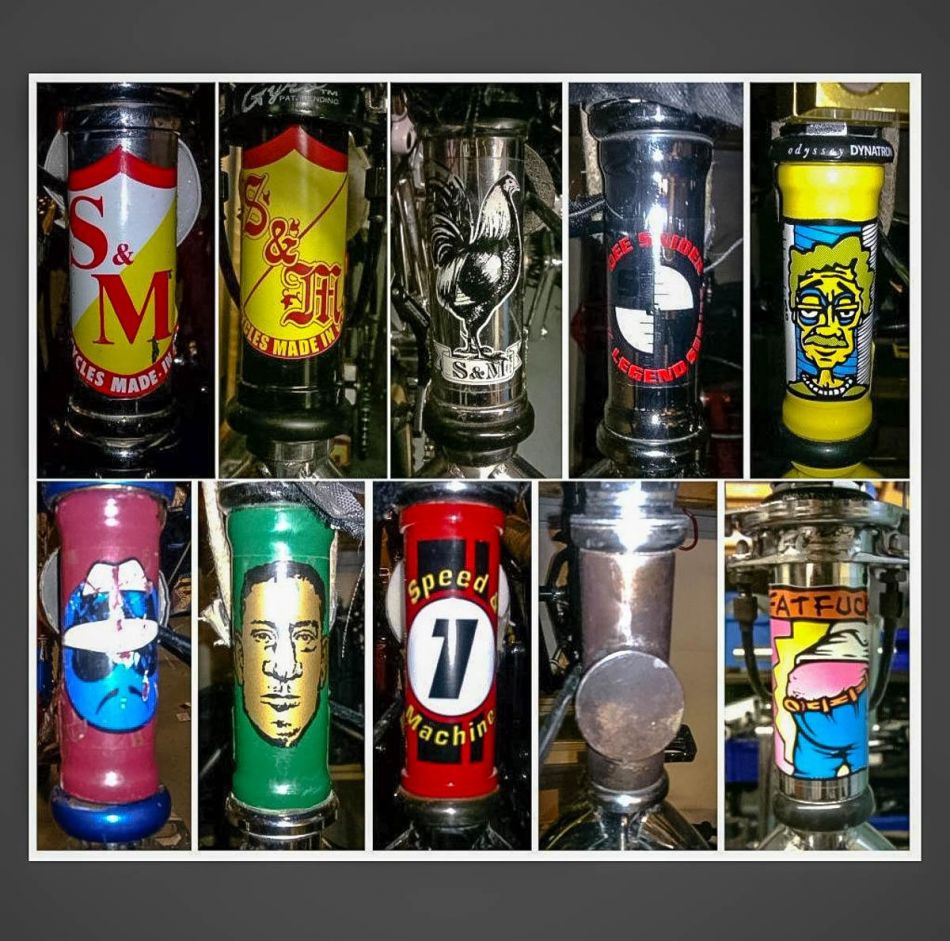 Why S&M?
Alex Leech: I first got an S&M frame in 1991 and soon after that they started helping me out with S&M frames & parts, and have continued to support me. Back then they were a tiny, very cool company run by young BMXers, making the bikes that riders wanted. Now they are a bigger, very cool company run by slightly older riders making the bikes that riders want. There was never any question what bikes I was going to collect. I’m not going anywhere else.

So S&M for life?
Alex Leech: No Question. This year is my 30th year riding S&M bikes! 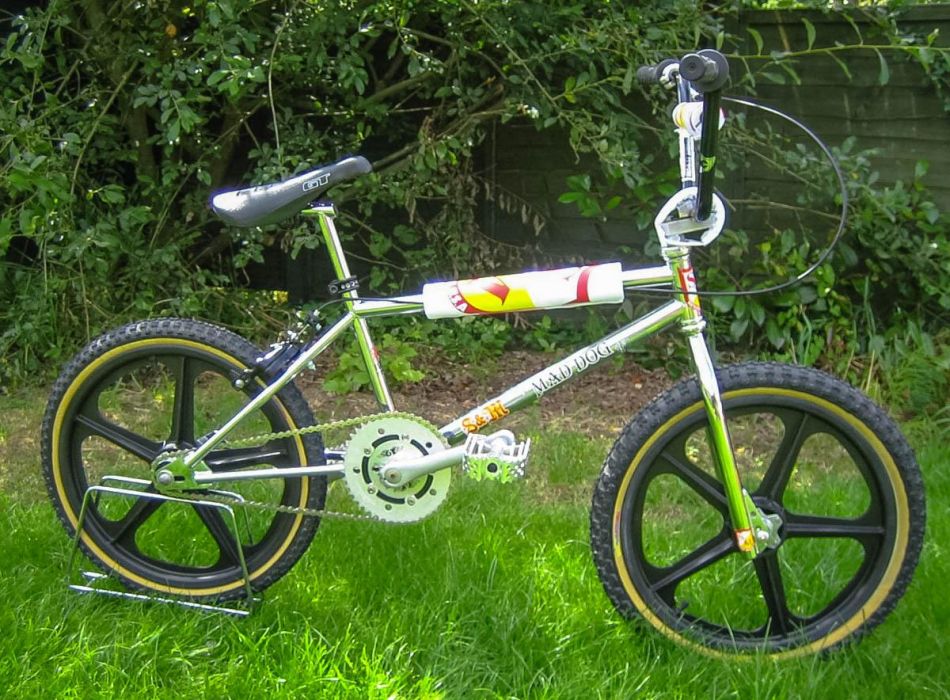 Being involved with the brand for so long and having ridden with the team riders so often, is there a product in the S&M range that you feel you're part of?
Alex Leech: I was a bit involved in the early '90s when BMXs were going through some major changes. I came up with the idea of a long stem wedge so I sent that idea to S&M and they created the Wedgie Jackson for the shafted redneck stems. It’s a bit of a shame 1” shafted stems became obsolete soon after that (it’s not a shame at all!). More recently, when Chris Moeller was working on the S&M book, he messaged me with a question about the early redneck stems. He asked: “why did we ever make a 1 inch clamp on stem?”. 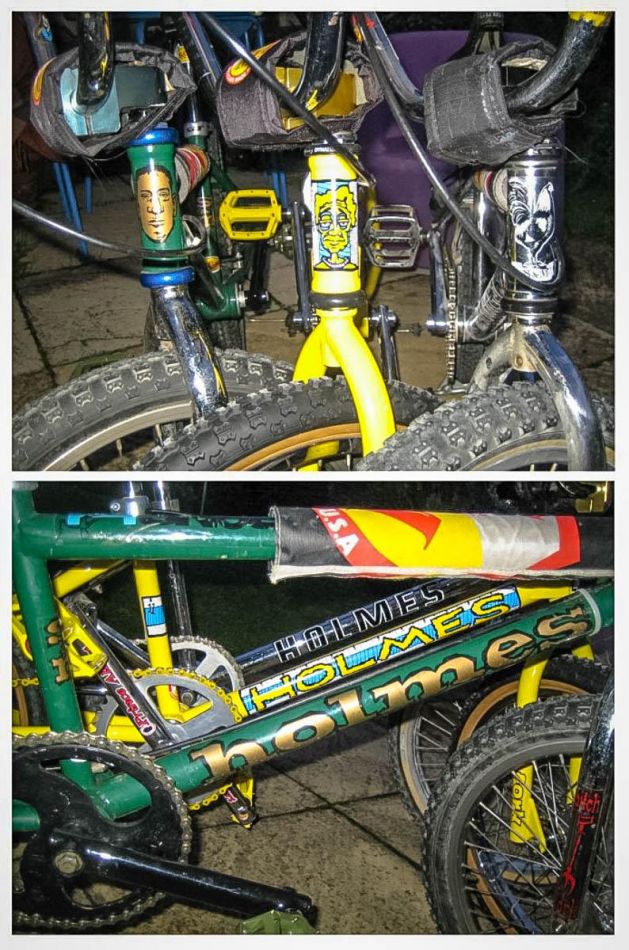 Looking back now it’s a fair enough question, but I was, of course, able to give an extensive reply. I ended up going on to write a piece in the book about the Redneck stems and all the different versions.

Did your collection start by saving your old bikes?
Alex Leech: Not really. I still have my first S&M frame but there are a few that I got rid of when I was done with them (I usually passed them on to friends). The main trigger for me collecting S&Ms came when I was busy with my children and I wasn’t riding as much (I have 2 sons with a year between them so I was occupied with babies for a few years). I spent way too much time on BMX forums and Ebay and decided that I wanted to try and get one of every type of 1 inch S&M frame they made (apart from a couple that aren’t every likely to ever happen). Lucky for me there weren’t many people collecting Mid school back then so the prices were really good. Some of the really desirable frames I have were dead cheap on Ebay cos no one wanted them. It ended up taking a long time to get all the frames I was after but I got them all, and I’ve built them up into complete bikes, including my original Dirtbike from 1991 which is built the same as I rode it using mostly the original parts. 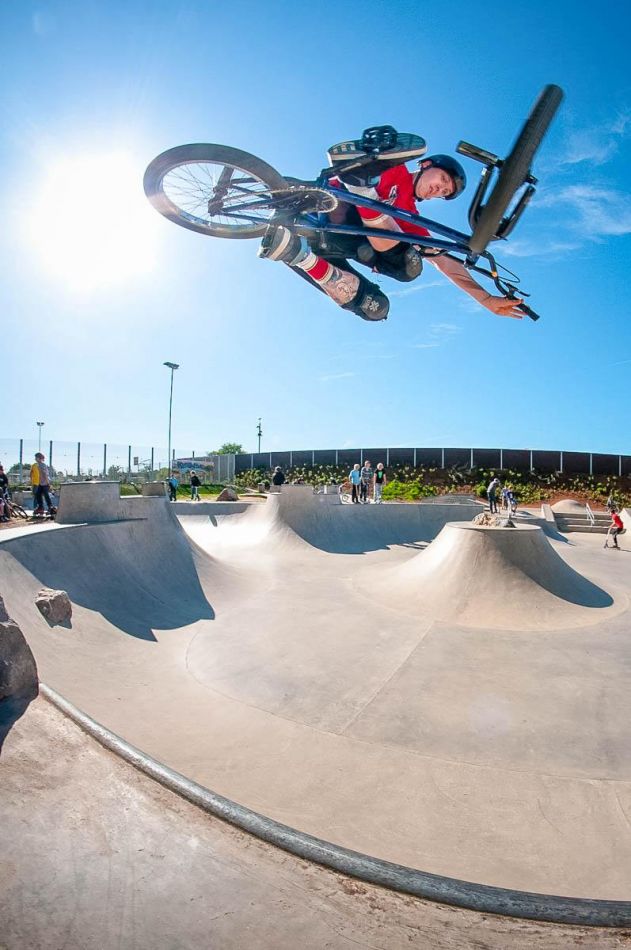 Along they way I’d ended up with some 1-1/8th S&M frames, some of which were old frames of mine (I got a few back from friends), so I started trying to fill the gaps and collect all the early “oversized” frames. I don’t intend to build these up, that would cost a fortune and take up even more space. There are still some classic S&M frames I’d like to get but I’m not that bothered. I can’t see me paying the current prices for the frames I don’t have. It would also be nice to get back a few more of my actual old frames back, especially as I usually modified them in some way.

What's the heaviest bike you've got in your range of bikes?
Alex Leech: Pleasingly, the heaviest bike I have is the HAF at 39.6 lbs (I should probably swap a few things on it just to make it up to 40 lbs!). I deliberately built it using heavy parts but they are all genuine, legit bits. The wheels are an old pair of mine that I used to ride. Triple wall 48h rims with PE hubs no less! 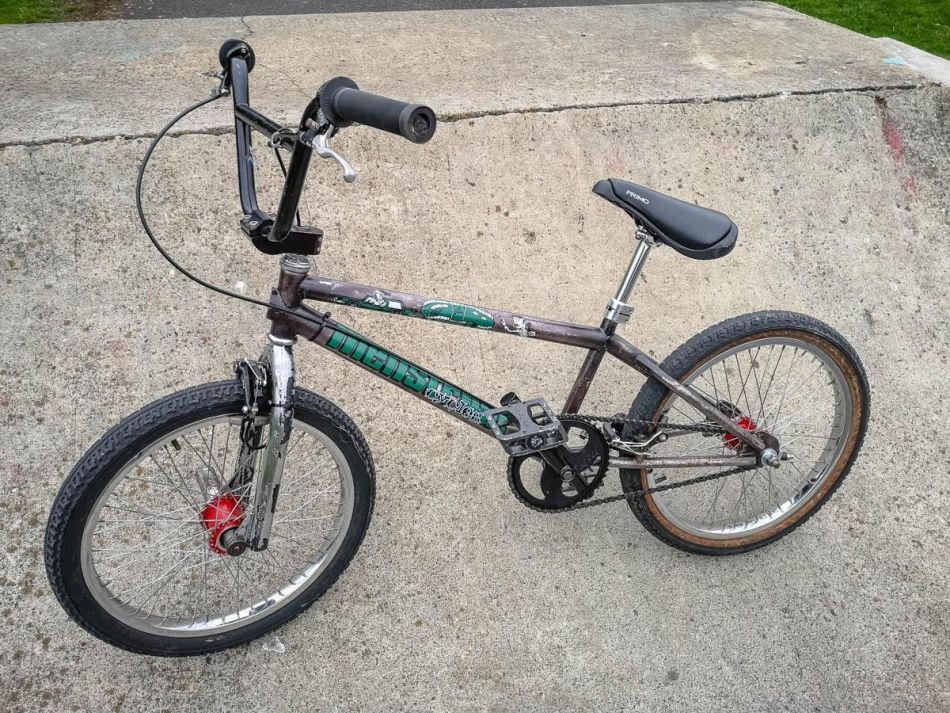 Where did you find the Menstrual bike?
Alex Leech: I got the frame from Frazer Wilson (via BMX forums) a long time ago. They weren’t really all that sought after back then so it wasn’t much of a big deal. It didn’t have the menstrual forks and stem, they took much longer to find. It’s a really nice bike and rides very well. Looking back now, I can't think why I didn’t ride one at the time. I should have known that Povah and Treanor were always gunna come up with something good. 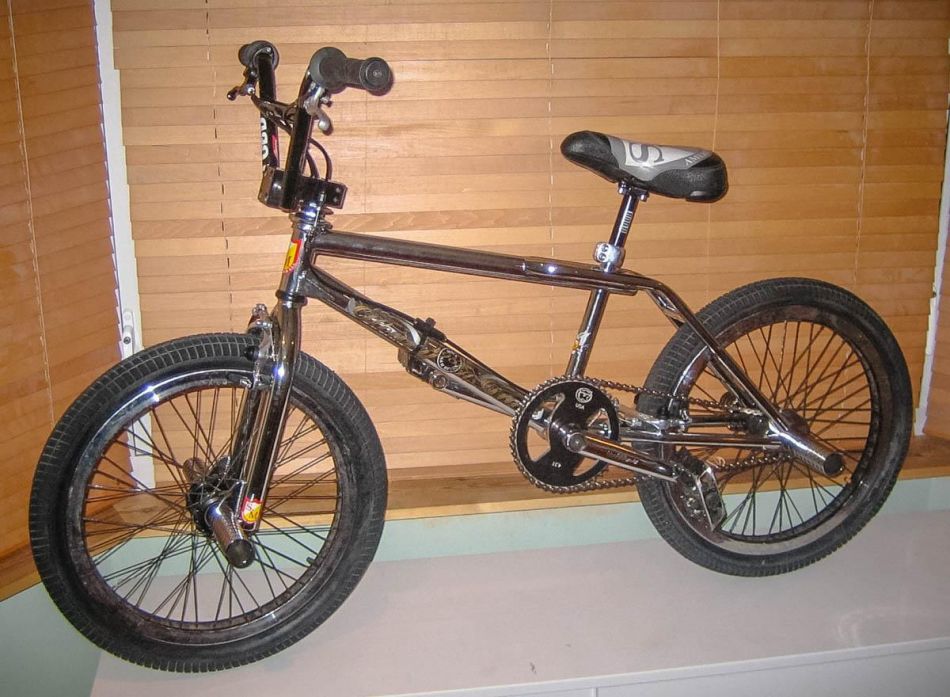 manufacturing quality whereas “made in the far east” usually meant that bike companies were farming out the manufacturing and often the design. I don’t think that’s the case now as high-quality BMX design and manufacturing isn’t exclusive to USA. I love that S&M have continued to make parts in house and stood by their original principals, but it’s a stroke of genius how they also take full advantage of getting parts and completes made in the far east with Fit. My Fit Indent spline drive cranks are the best cranks I’ve ever used.
Or …. are you asking specifically about S&M Pad sets …. in which case, the older “MADE IN USA” pads look WAY better! 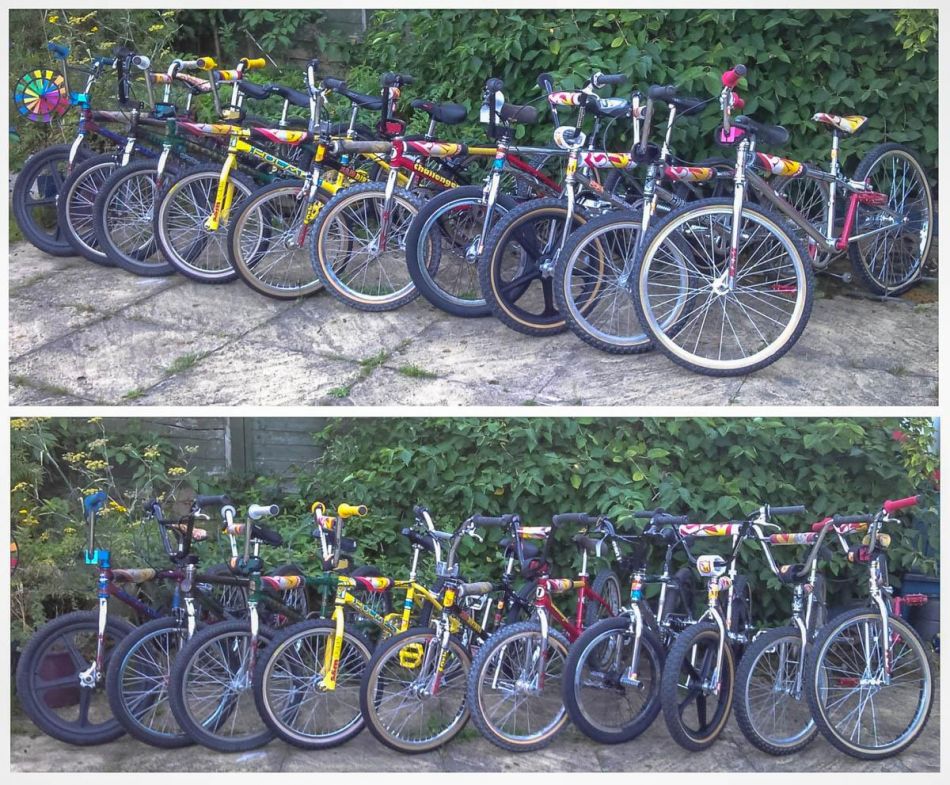 Have people handed you their survivor bikes/parts because they know you're into them?
Alex Leech: Only about 3 or 4 ….. 5 tops. I give them a loving home where they will be safe and cared for. Things like that are important when finding a home for your old bike.

Is the S&M Maddog with Tuffs, VDC bars, triple cage pedals and Pitbull brake the most precious bike you've got?
Alex Leech: Funnily enough, I don’t have much emotional connection to that bike. It’s a lovely build and I’m very happy how it came out. I based the bike on the one Moeller rode in 1988 at the first ever street contest in Santee. It's one of the few bikes of mine that’s really tidy and I’ve not ridden much so that might be why I’ve not bonded with it. Or …. It might just be cos it's chrome. I don’t like chrome frames. 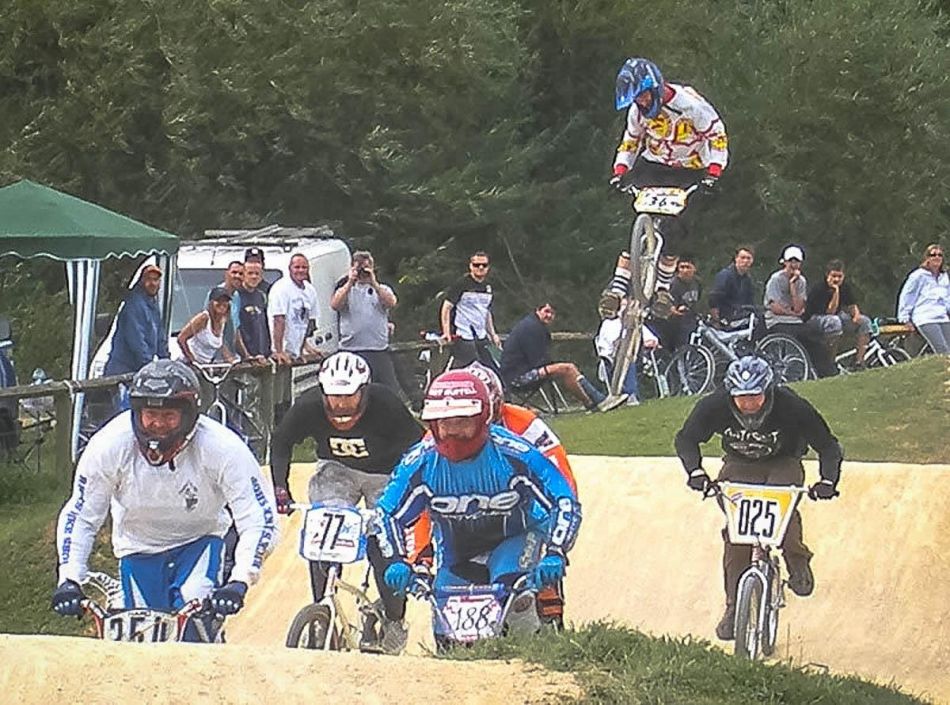 Do you keep bikes in survivor mode or does the shining polish come out from time to time?
Alex Leech: I’ve got 2 or 3 bikes that are “as new” condition but as a result I haven’t ridden them. I don’t like that very much because I’d prefer to ride all my old bikes. All the other bikes are survivors but not really through any thought or design. If I haven’t had to repaint them then I won't and it's so much better when you don’t have to worry about damaging them. I had a totally mint S&M shield drop-nose seat but owning it was way too stressful. It stayed in a padded bag the whole time. I ended up getting a used version of the same seat and selling the mint one. I don’t need that kind of pressure in my shed. 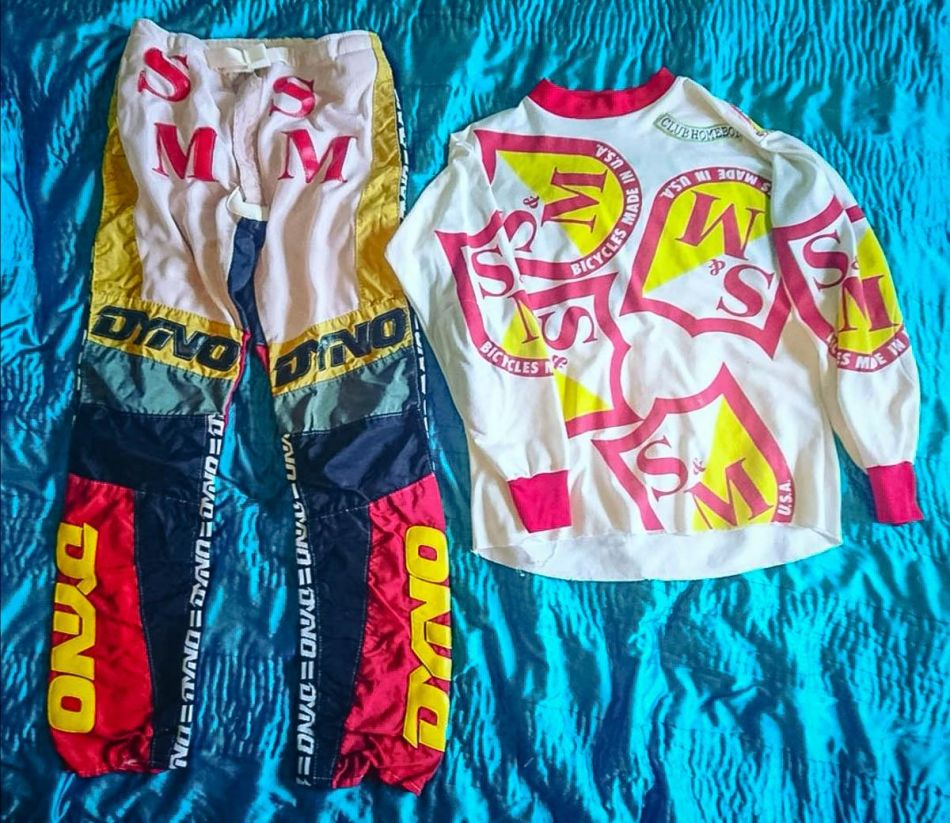 How many have you got?
-Slambars: Maybe 10 pairs, most are “dancing man” but I have some examples of the earlier shapes too.
-Rednecks: 1” shafted I have one in all 6 of the colours and a couple of duplicates, so maybe 10 total. I have a 1” clamp-on redneck (for the stupid forks). I have at least one of every version of 1-1/8” clamp-on redneck so maybe 20 total. I was gathering them for years, some of them are so so used they are incredible. Beat up, used, abused, but loved.
-S&M Pad sets: Maybe 10 or 15 sets. I used to get a new padset when I got a new frame and I clearly remember the time that McKinney told me they 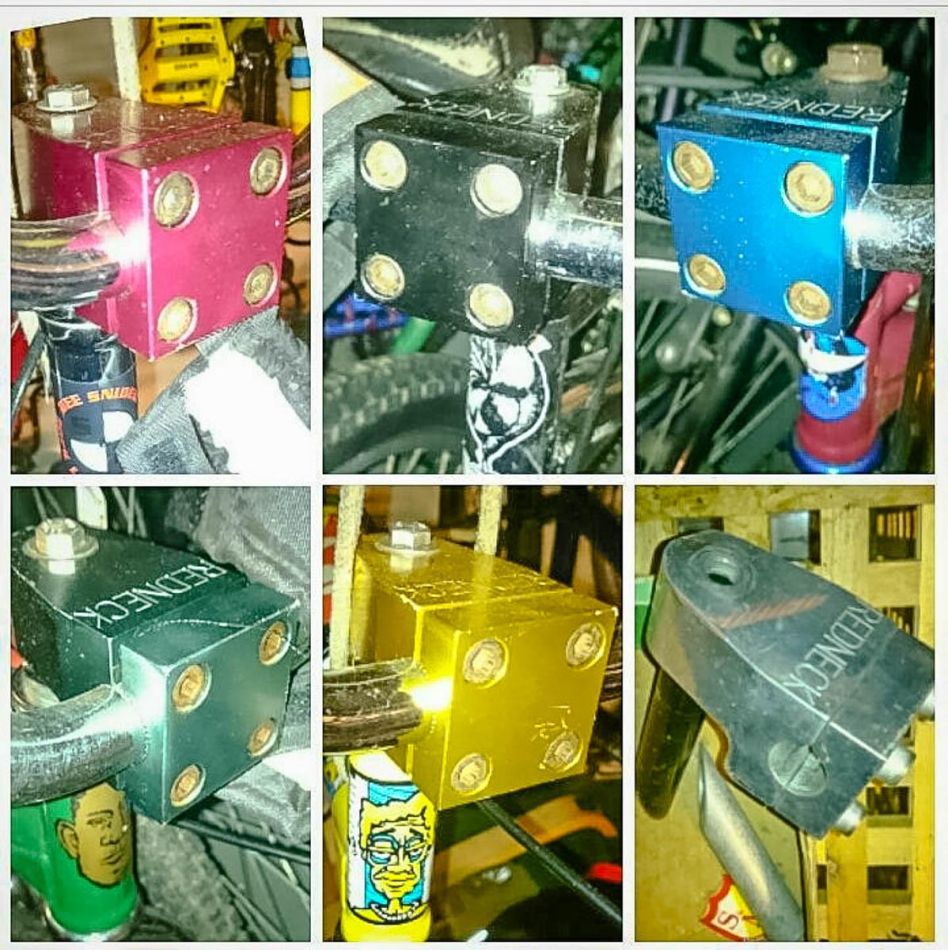 weren’t doing them anymore. He said, “pad sets are extinct!”. I was gutted. It’s a pet hate of mine to see old S&M bikes with the new padset on. I hate myself for feeling like that cos people can build their bikes any way they like, but a little part of me cry’s when I see a lovely early '90s S&M with a new padset.
-S&M Jerseys: I only have 4 race jerseys. 2 of them are original '90s tops and I have the full race kits. I’ve only got to use them on the track a few times, they definitely make you go faster and maybe a bit higher too.

Where can people reach you in case they've got a dusty S&M in the shed that they want to donate?
A

lex Leech: My Instagram is @corpralbleech and facebook is good too. I'm always happy to answer any S&M based questions and give a good home to any old S&M parts. Any condition considered.

Thanks to?
Alex Leech: Always thanks to Chris Moeller and Ian Morris. We all owe them a lot. As far as collecting thanks, not a day goes by without talking to Johann Chan and James White about something. The 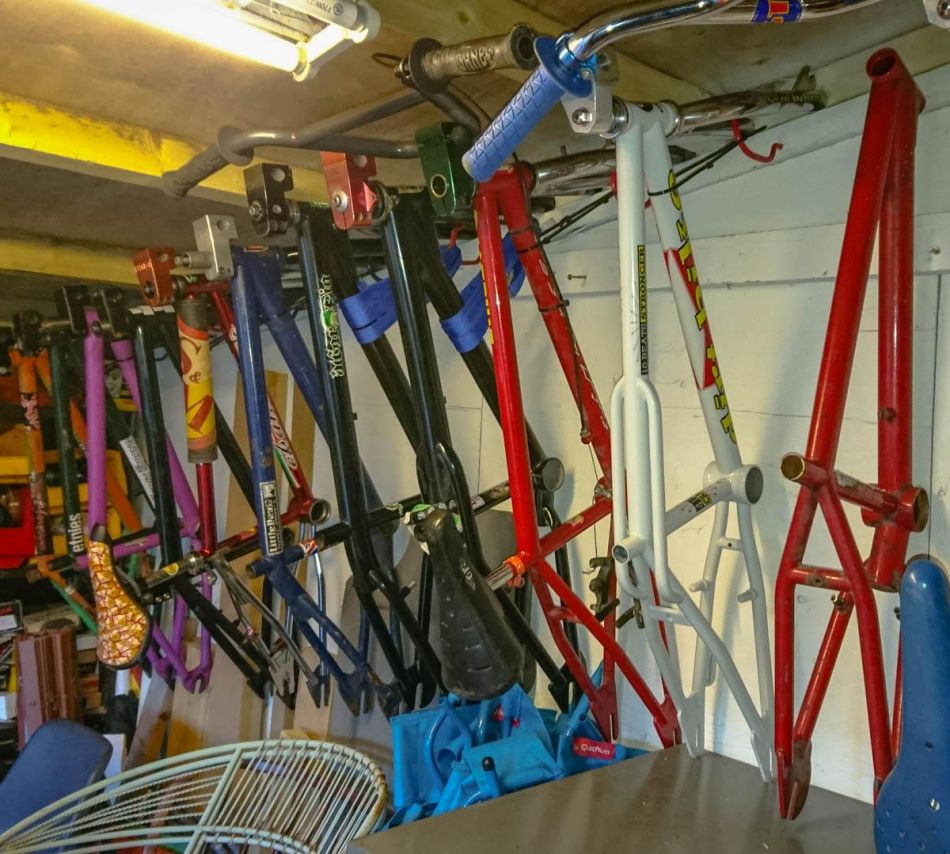 depths of '80s and '90s BMX trivia that our chat group sinks to is unimaginable. The “Mid school” collecting scene is a nice friendly place and I’ve met loads of great people, and here’s a lesser-known fact: lots of them ride as well! 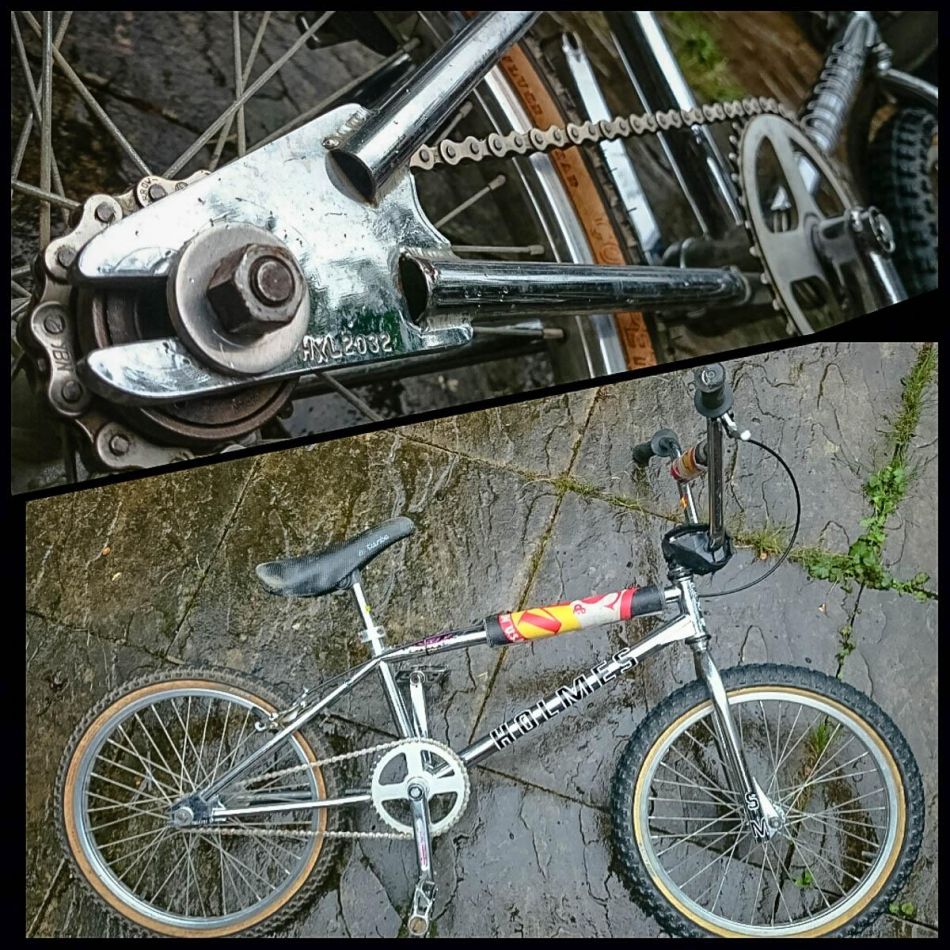