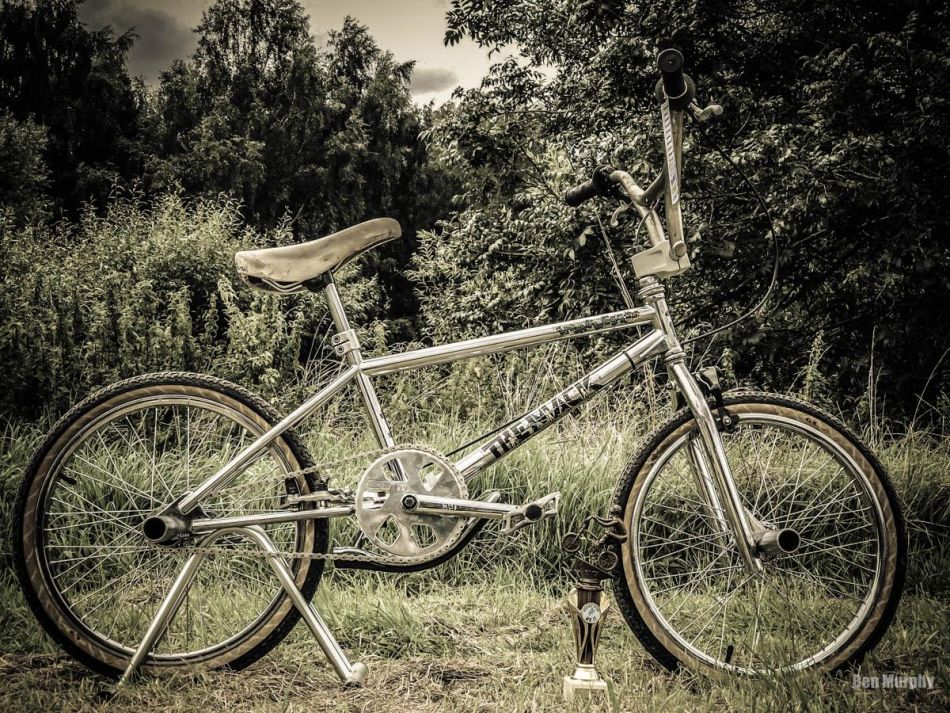 Name: Ben Murphy
Hometown: Dublin, Ireland but now living in Vancouver, Canada
Started riding BMX in: 2000
Number of bikes in the collection: 20 I think, plus Tons of spare parts, Boxes and boxes of Magazines and a VHS/DVD collection for around 700 or so, who knows haha?

Do you remember the moment that you decided to start collecting BMX memorabilia?
Ben Murphy: I remember it to the day. It was 26 December 2015, I bought an FBM Night Train with Kick Ass Forks, 44t FBM sprocket. I had joined the group Mid School BMX Day on Facebook a while before. I got some money for Christmas and I knew I had to buy it. 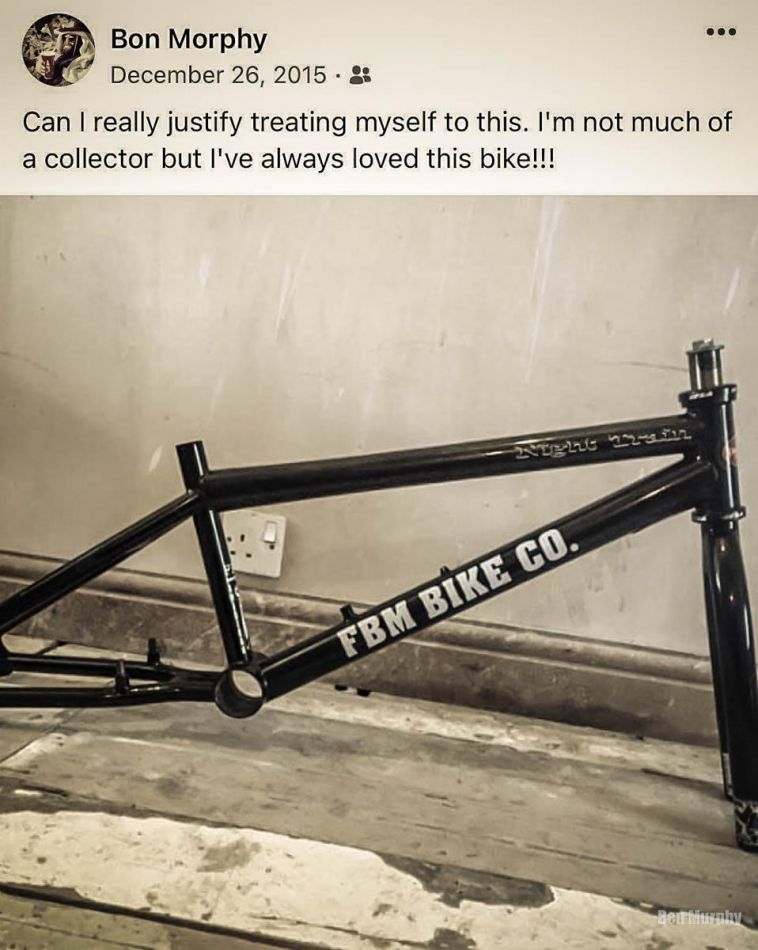 I even remember typing out the status “Can I really justify treating myself to this. I’m not much of a collector” hahaha. How things have changed.

At this moment, do you wish you had started collecting earlier?
Ben Murphy: Absolutely, I know some absolute gems that have been passed around before I started collecting but I don’t regret it, I got on the scene at a really good time too and have built up a good network of people who know what I collect pass leads on to me and I’ve got some amazing products throughout the years.

Do you feel there is a need for BMX products to survive for history's sake?
Ben Murphy: Absolutely, I love the idea of preserving BMX history. It can be done in so many ways. I particularly like bikes that show their battle wounds. Scratches, dents, chips, spray bombs, sticker bombs, it's all in the bike's history. I've seen people take some of these bikes and strip the paint and put a fresh powder job on there and for me it absolutely kills it. I’m also very into collecting VHS, DVD’s Magazines, Zines and Stickers. I feel all of these things and more are all important for the preservation of BMX history. 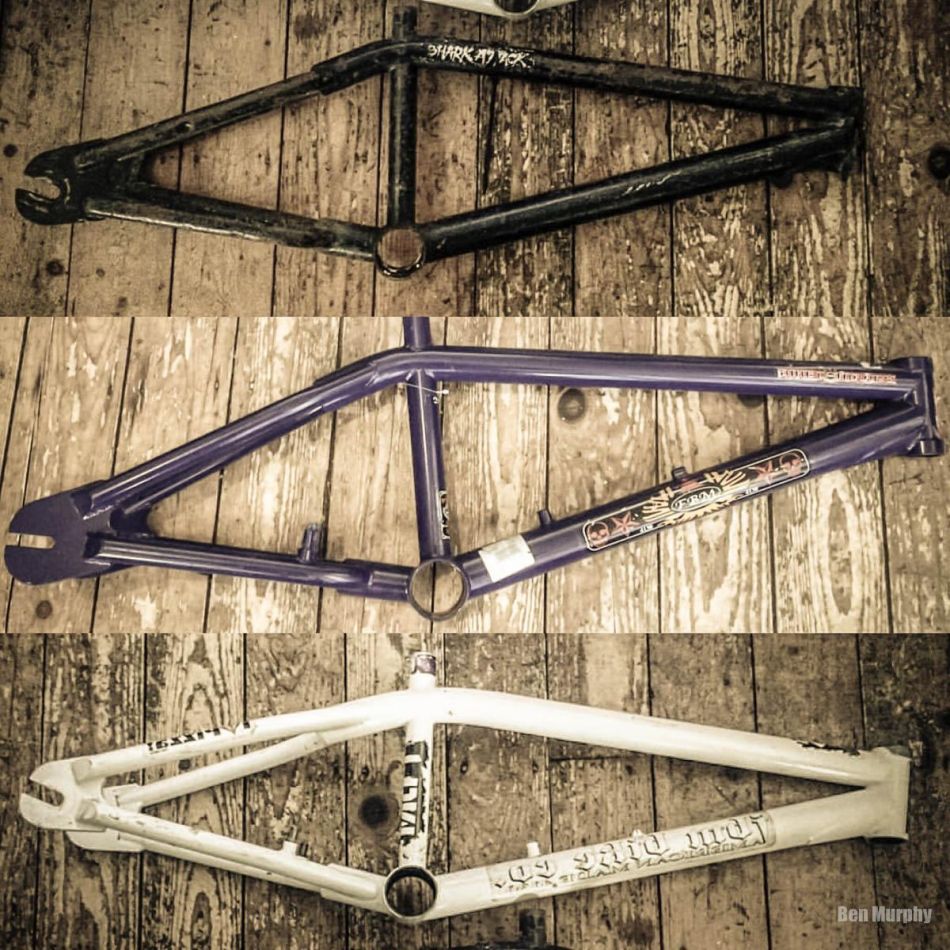 What's one of your oldest BMX products in your collection?
Ben Murphy: My oldest piece is probably my GT Mallet stem, which is a 1985 one. The oldest bike I have is probably my first gen Homeless Mack or my S&M Dirtbike that I have recently bought. They would be from somewhere between '91-'93 I think. I do plenty of VHS from the '80’s too and recently picked up a copy of Dave Vanderspek’s Curb Dogs.

When you started riding what bike was the dream bike for you?
Ben Murphy: It was an FBM Angel of Death, one of the local guys, Jesse James rode for FBM and had a Kastan made one in this cool, blue purple colour and I loved it. That was definitely the best bike I never rode.

Do you have that bike in your collection today?
Ben Murphy: I am lucky enough that I have 3 of them, the first ten one which was made by Spooky, a NOS one exactly like Jesse’s, and a third one made by Maas industries. 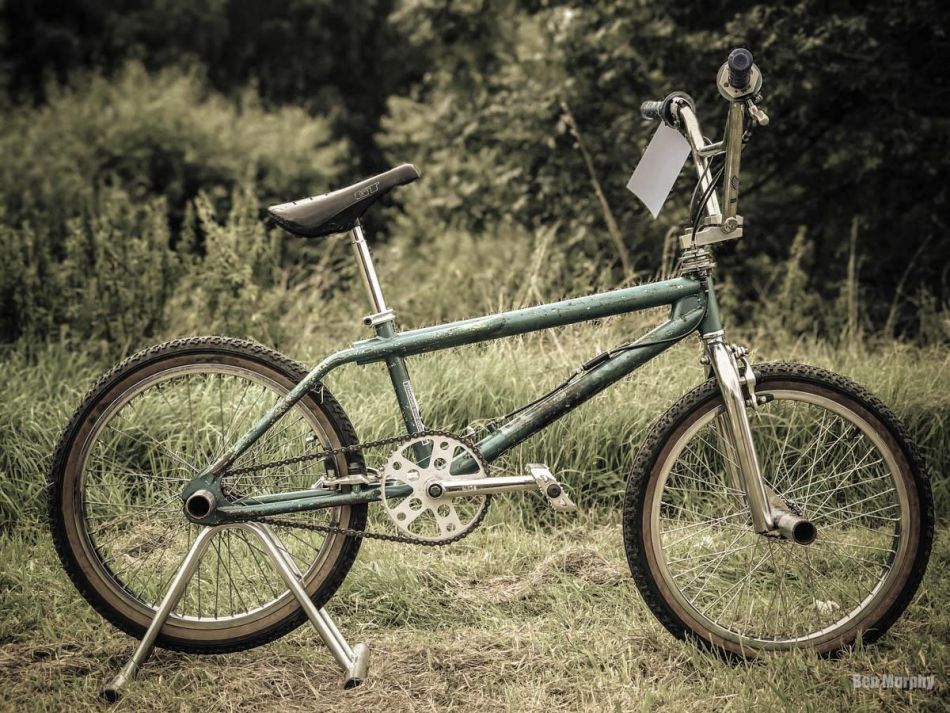 Name three BMX collectors that you respect?
1) Stu Smith for creating Mid School BMX Day group on facebook
2) Stephen Joseph (@83bus) - He builds some amazing bikes
3) Nick Bevan - He has the most insane ability to find anything in the BMX world and he’s helped me out loads over the years.

Do you have decent mechanical skills?
Ben Murphy: Yeah I know my way around a bike, I've always built my own bike and done my own maintenance. The only exception being that I hate doing wheels, I can build them but I don’t have the attention span to want to haha. I used to always get a friend to do them for me but when I started collecting, I just started doing them myself again. I guess with these old bikes there are so many modifications you gotta make as anyone who rode bikes with press in headsets, quill stems and USA BB’s knows, there were absolutely no standard sizes back then and nothing ever fit and everything always broke.

What products are a great help when you find an 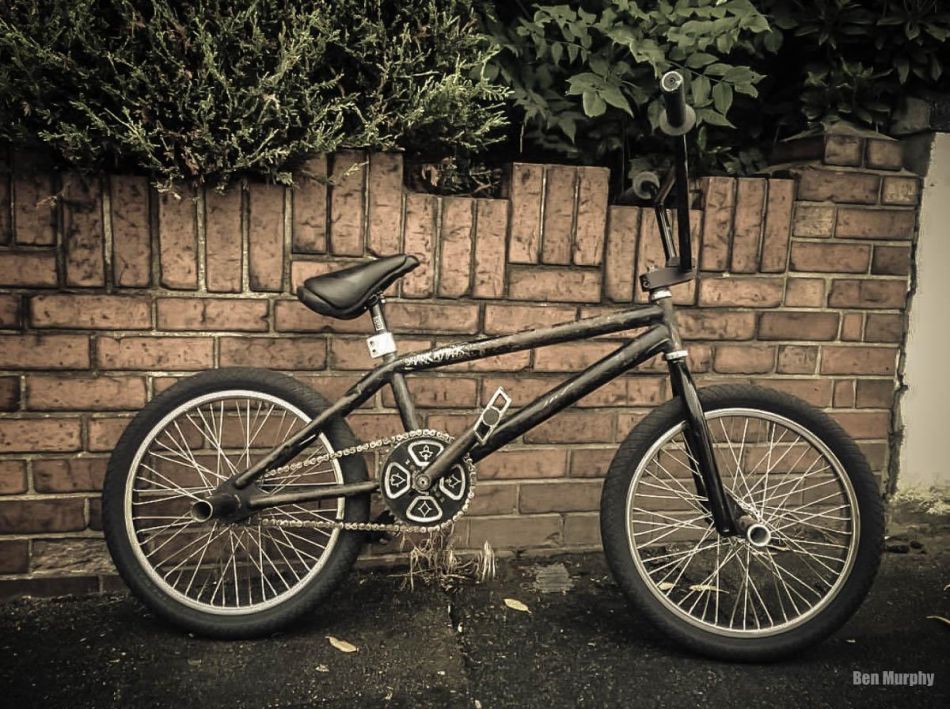 old rusty historical piece of shit bike that needs to shine again?
Ben Murphy: Starchem Synstrip for stripping paint, anything else just isn’t worth the money or effort. Caustic soda/Oven cleaner to remove dye and anodizing from aluminium parts. Citric acid to remove rust and bring chrome back to life. SBD is a master finisher and if you ever need your bike painted, go directly to him!. All that being said, I don’t really refinish stuff anyway for the most part unless the frame or part is so far gone that if I don’t restore it, it will be lost forever.

How often do you look on eBay/Craigslist/BMX Museum to shop for old BMX stuff?
Ben Murphy: I used to be on them constantly, I had notifications set up for a lot of the things I wanted. These days I'm on them less and less but I do still browse a few times a day hoping I can still get some gold. I’ve refined my collecting a bit from buying as much as I can, to being a lot more selective and really going after certain bikes and parts.

What's the most ridiculous amount you have paid for a bike part that you needed to own?

Ben Murphy: Hahah, I don’t think I’ve ever told anyone this but I paid £585 ($800USD/€650 for my Schwinn Mean Streets frame, I had seen it doing the rounds, it passed through a few hands around the USA, then went off to Australia for a while when finally the owner approached me and asked if I wanted to buy it, I couldn’t turn it down even at that price as I knew they were so difficult to get hold of and Van Homan is my favourite BMXer, next to Mat Hoffman. This is one that will never leave my possession. 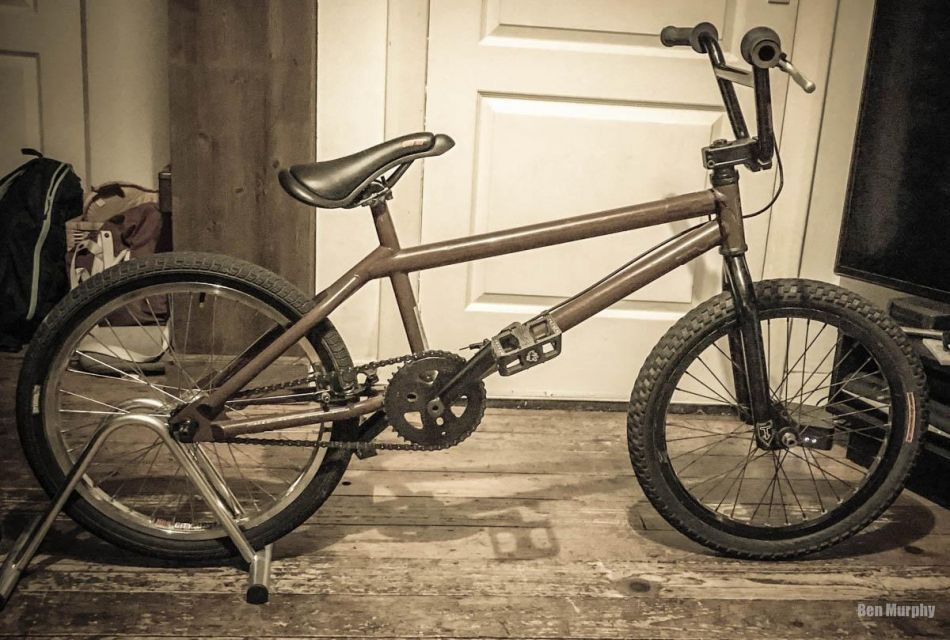 Ben Murphy: In my old house in Leeds, UK I had them out in the basement. It was great to be able to go down and admire them, build them, swap parts around and such. At the moment they’re stored away at relatives houses in Ireland while I’m trying to get permanent residency in Canada.

Do you always have room for "one more bike"?
Ben Murphy: There's always space for one more bike haha, I may not be able to have it built up but I'll find some space for it somewhere.

What's a bike (part) you have been looking for but haven't been able to locate?
Ben Murphy: Dirt Bros (1990), which is just a Skyway TA but even still, I wand a legit DBI with original stickers. There's a few others, but that would be the main one. I’ve also been on the hunt for a copy of A Day Late, A Dollar Short by Andy Marshall on VHS

Where can people reach you when they have that part available? 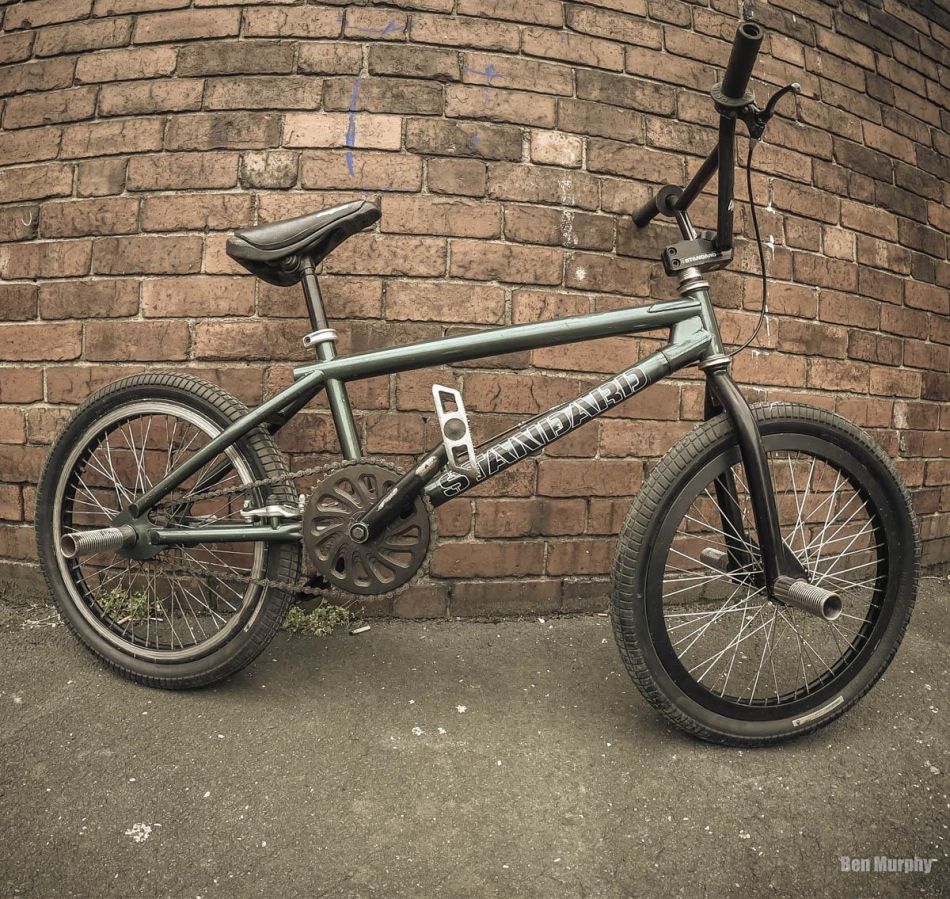 Thanks to: Stu Smith and everyone on the Mid School BMX Dayz page on Facebook, My Mam and Sister for letting me store a ridiculous amount of stuff at their houses, All the people who’ve helped me out by either selling their gems to me or passing on killer leads and a big thanks to whoever will sell me their DBI frame hahaha.

More in this category: « (1985) BMX Plus! Freestyles Raddest Tricks by OldSchoolBMXTV Preserving BMX History: Jeff Tollefson (USA) »
back to top