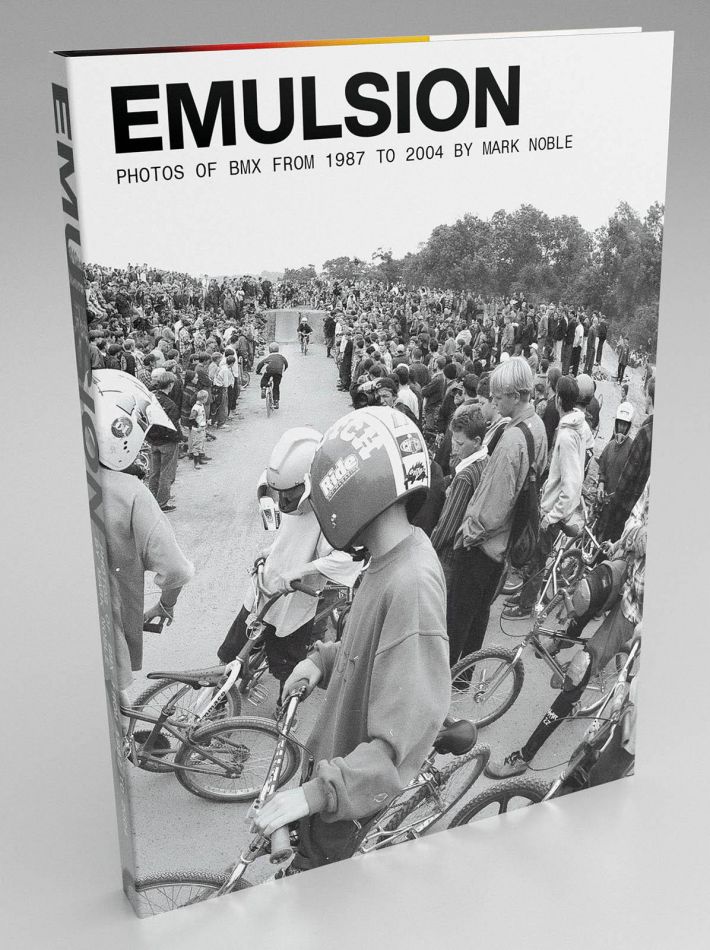 How long was the thinking process before you decided to get to work on the book?
Mark Noble: I've been thinking about this book for bloody years to be honest. All my old photos are filed away in boxes in my garage space, and each time I went in there for something else random I thought "there's probably a photo book in here, maybe one day..." but I knew it would take a serious amount of time to make it happen, and I just didn't have the time. Then in spring 2021 an abrupt change in employment meant I suddenly had all the time in the world - so I got started. Well, after repainting most of the inside of my house first, I got started.

Did you have things lined up and organized as far as photos were concerned?
Mark Noble: I kept everything in date order anyway, so it was all reasonably well organised - I was pretty good at that sort of thing I guess, you have to be when working on multiple magazines anyway.

The gOrk (aka Craig Barrette) interview. A new role at USABMX 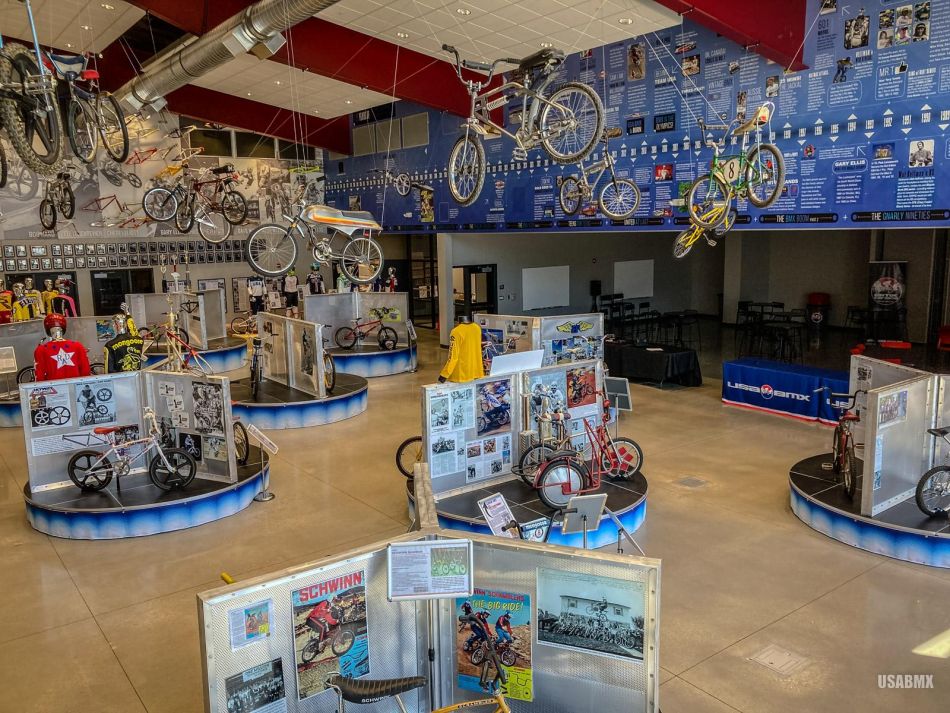 Name: gOrk (aka Craig Barrette)
Hometown: Soon to be Claremore, Oklahoma (on the outskirts of Tulsa)
Started riding BMX in: 1976, at age 13. ... and have never stopped.
Biggest result ever: Being inducted into the BMX Hall of Fame in 2010.

Congrats on the new position at USABMX. It was newly created and seems like a perfect fit for you. Can you explain what it entails?
gOrk: My new title is Curator of the USA BMX Museum. For the most part, I will be in charge of the new BMX Museum that we opened earlier this year at the new headquarters in Tulsa, Oklahoma. Aside from continuously adding content to the Museum and rotating displays, I will finish archiving and scanning

Raleigh Partner with Alans BMX to Support the Charity Bikes4Ukraine 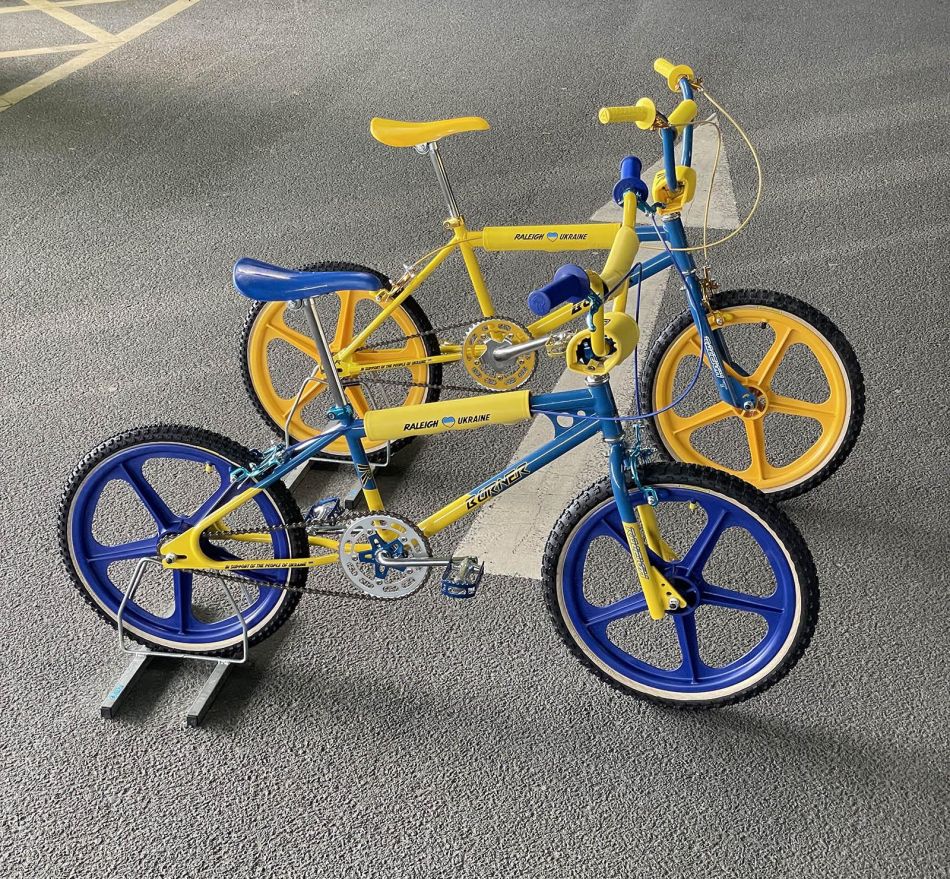 Raleigh , the British bicycle brand, is supporting Alans BMX and the charity Bikes4Ukraine - Alans BMX will be raffling off two one-off custom Raleigh Burner Bikes in Ukraine colours to raise funds for the charity so refugees can be supplied with bikes. So far, thousands of refugees have left their homes with next to nothing and public transport is under extreme pressure. With limited alternative ways to travel, Raleigh and Alans BMX understand the urgency to support a charity.

Bikes4Ukraine is raising funds to support the collection of second hand bikes and transportation of them to Ukrainian cities such as Lviv, where thousands of people are currently seeking refuge. In order to help the charity, formed by Mikael Colville-Andersen, an internationally renowned expert on cycling and
urban mobility, Alans BMX built one Mk1 and one Mk2 Raleigh Burner BMX bikes. The bikes are specced with Dia-Compe brakes and Tioga tyres supplied by Ison Distribution, special graphics by Delcals 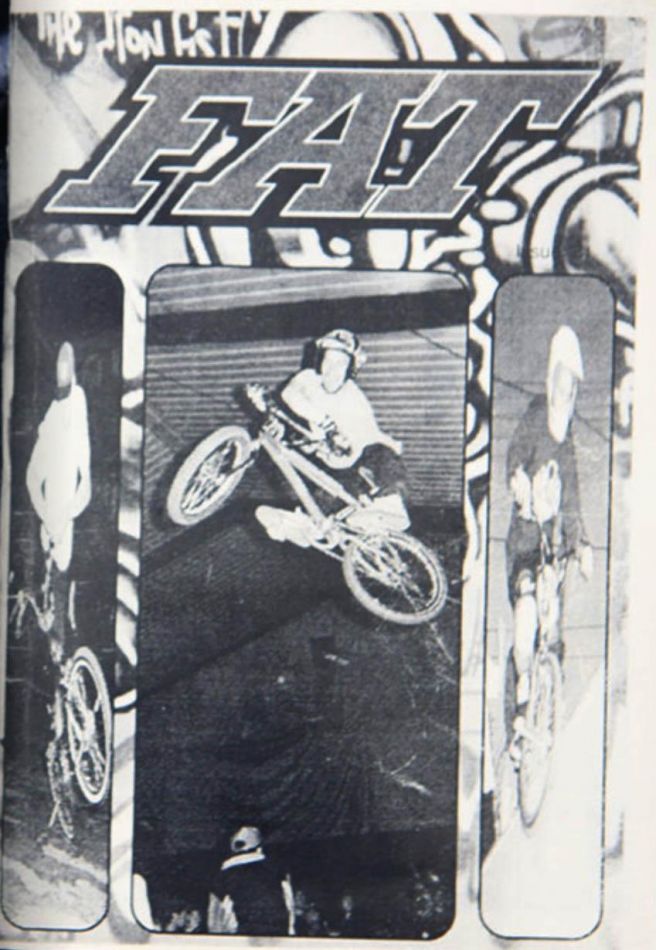 Mark Losey has shot many covershots in his life. This time he makes the cover himself, mouthguard and all. Brian Foster had just discovered the freestyle scene and puts his aluminium Schwinn to the test by doing a 300 X-up in Chicago. Third rider on the cover is Trevor Meyer. Has anybody heard of him lately?

The year is 1995 and I just got my first computer and played around with Coreldraw a bunch for this issue. For once FAT had different fonts, different font sizes and more of that stuff that did not work on a typewriter.

The news section was big again. We went straight into the S&M warehouse ramp followed by a Robo interview. Megafestatie report, free Haro sticker, and a report about the Chicago BS comp followed. The Sjappi Jam in Maarssenbroek was always fun. Dirt , Vert and Lake jumping this time.

KHE provided a sticker and then we went on the Jinx-tour. One of the best trips ever.

We had to smuggle Jay Miron across the Spanish border in order to do a show.

Read all about it in issue 31.

We had a session in RL Osborn's backyard. Rode some pools in the USA. Went to the ABA Grands. 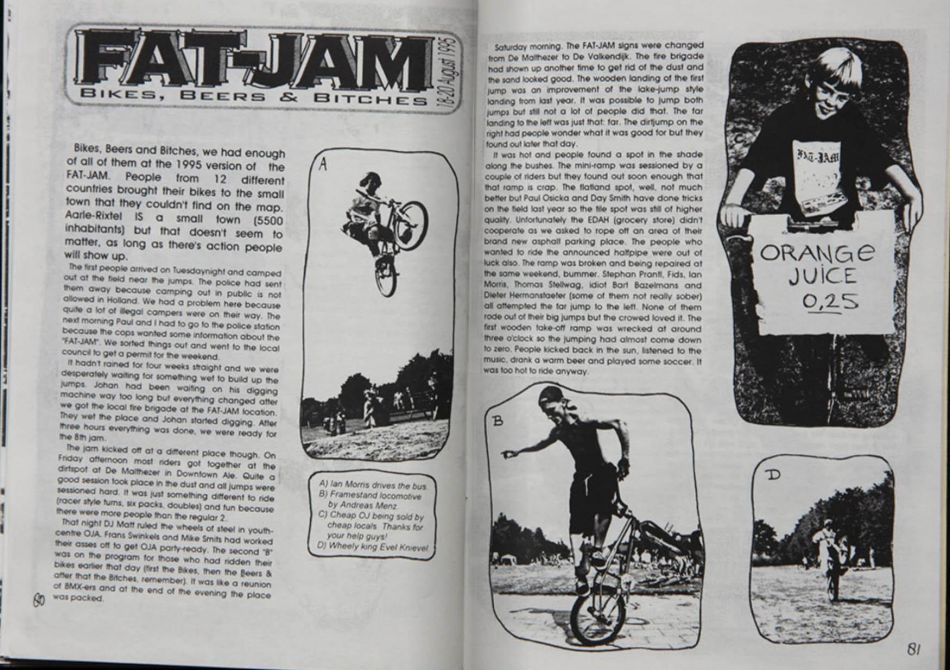 Had a free Webco sticker and visited Hoffman Bikes in Oklahoma. It had been ten months since the last issue had come out so we had loads of content. We went to Kampen for the first round of the Dutch BMX championships. We printed a scene report of an Italian park in Lignano. Of course we had a Mission Trails report, a Mutation sticker, Bartman comic, KOD report from the ABA Grands and a free Vans sticker. Soo wrote about the A4 trails and then it was straight into the Brian Foster interview. TL won the ABA race in Reno, read the report on page 78-79. Evel Knievel made it to the FAT-JAM and I wrote a little report for Gearhaeds 'zine on the GT AirShow. Flip through it and enjoy. 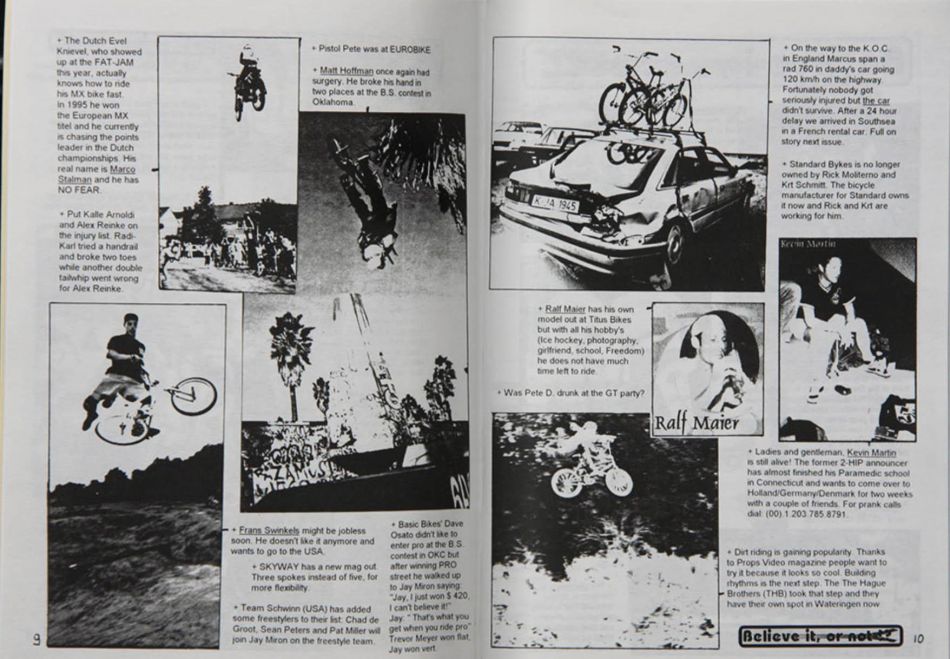 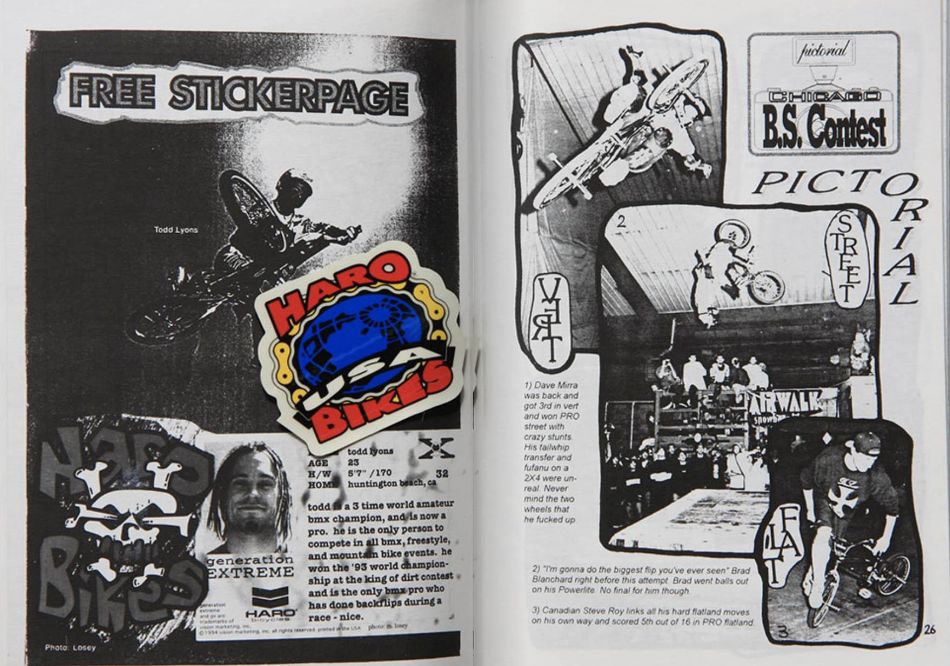 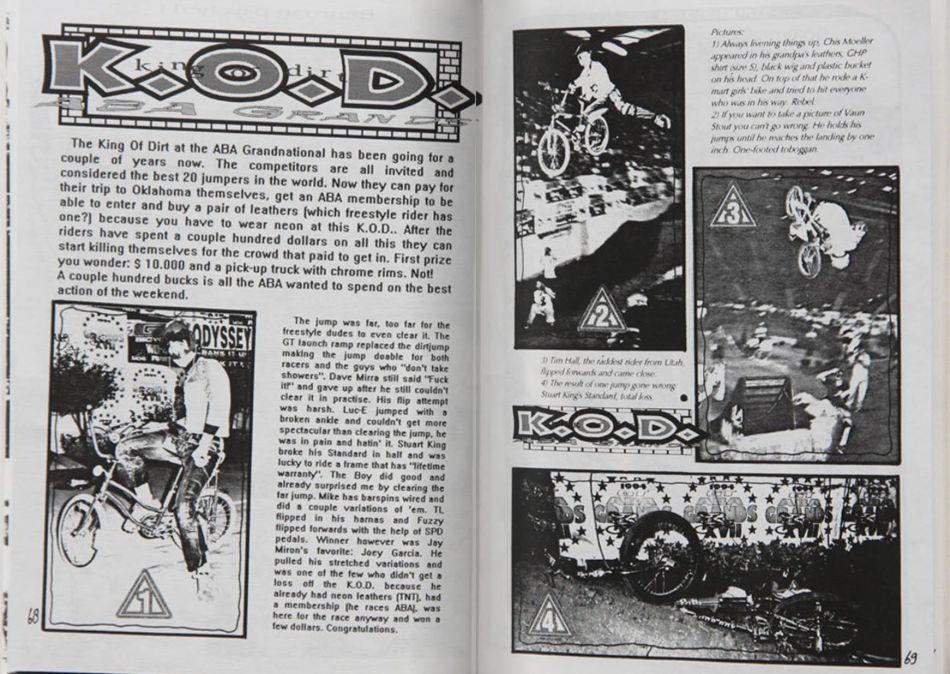 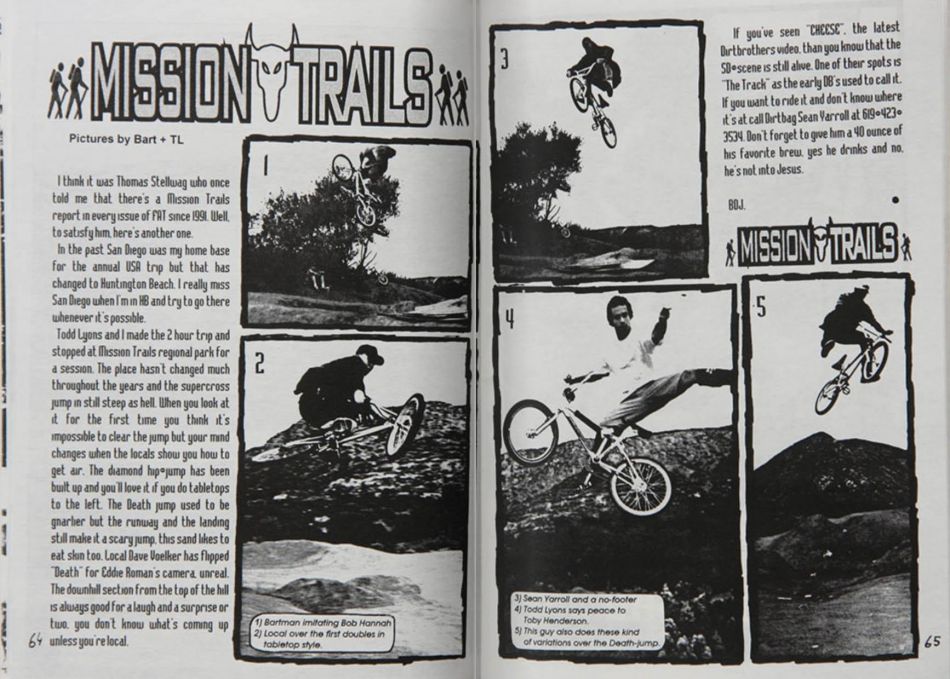 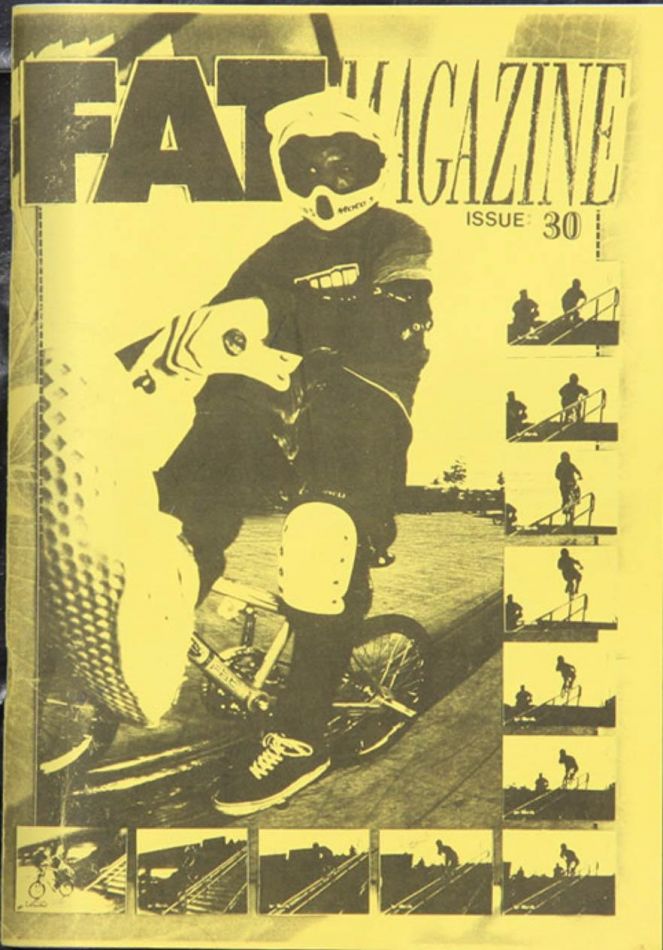 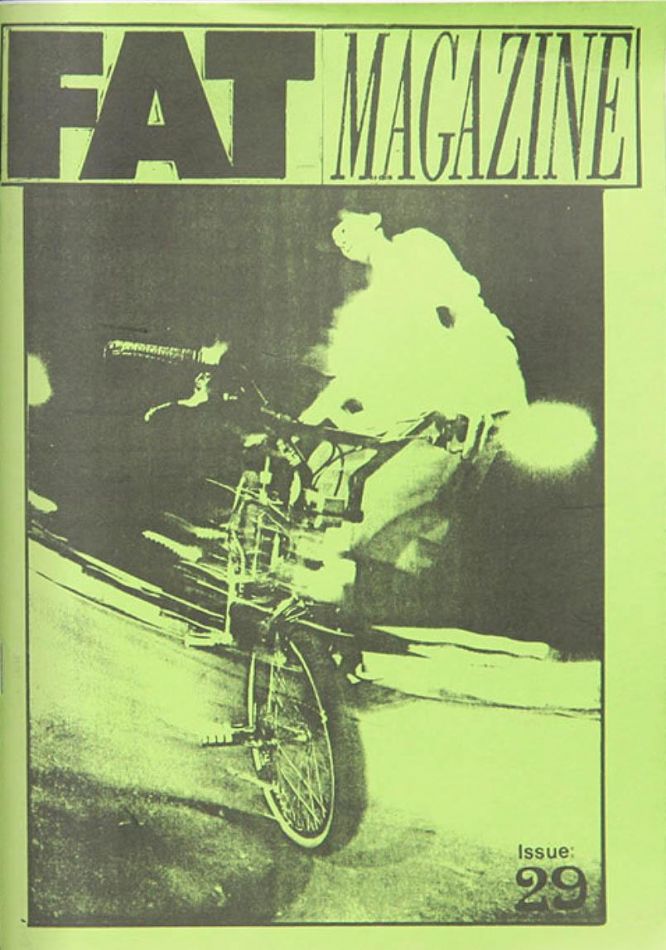 Issue 29 came with a bunch of free stickers; Mutation, BMX PARTY (Mental Jimmy'z), Forbidden Planet, VANS Off the Wall and a Gatorade postcard featuring Mat Hoffman doing a backflip. These little items were nice extra's that came free with the 'zine.

Webmaster Jos sent me a copy of page 4 a few weeks ago. Read it and smile.

8 pages of BMX news followed. Then the report about the trip to Copenhagen for the X-Mas jam followed by a Solingen miniramp session report.

Woody Itson gets interviewed and we went to the Phoenix Winternationals in the back of Chris Moeller's pick up truck. Back to Holland for the first NK of the year.

Also covered in issue 29 is the BS contest in Moreno Valley, California. Those comps were fun.

We posted the I-punkt BMX comp results, did an interview with Mike Daily and Cruzin' Chris, went to another race in SoCal, and also Markus Wilke gets an interview.

I've known Andy Brown for well over 30 years now. As a kid many of us looked up to him and the crew he rode with as the older riders coming out of the London area, leading the way. 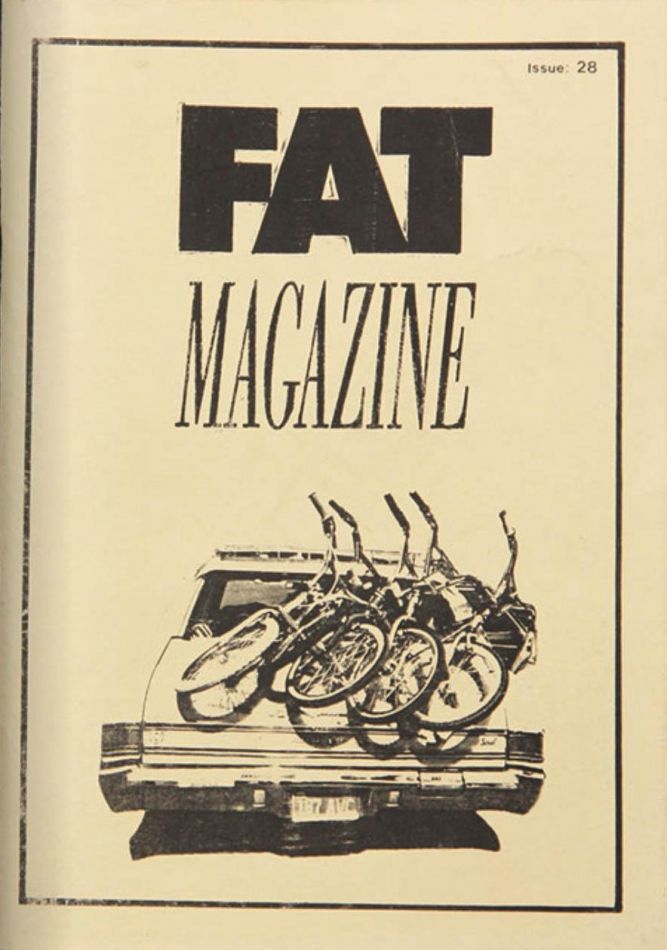 The cover of issue 28 shows what we were all about in 1993. In fact, it hasn't changed much. Road trips are the best. We brought you the BMX news in 1993 and we are still doing it now. 7 pages of BON in issue 27 and you were up to date of all the BMX news.

We received Huphter and Rabbit stickers for the free sticker page. Achim Kujawski received an interview and then we're moving on to oiur annual Mission Trails jam.

When noone was putting on a jam at SoCal's best dirt jump spot we took things in our own hands (again) and had a good time.

I missed the 1993 world's in Limoges, France but got some pics from Ralle and printed the results. Your pro champs? Retey, Hoffman and Wilke.

A 6-page Paul Roberts interview follows. He must have said something funny in this. Hope you can read it as the text is small.

The UCI BMX race world's took place 30 minutes from our place. We went there and even organized a KOD on the first straight.

We also had a Las Vegas session at "The Pits".