Who is Matt Pingel?
Matt: The whole story, Bart? Hmmm. These days it's a guy who still tries to be creative in all kinds of live. Be it job or photography, building bikes and parts or writing.

You were a strong part of the 'zine - scene in the eighties - nineties was that a right fit for you?
Matt: Most definitely. Zines, the xerox art, that whole era definitely had a foundation of my today's lifestyle. It was a time when no computers existed, the bmx scene fell apart, because the only medium, " Freestylin " magazine, faded away, Spike Jonze, a strong force behind it became a video artist. Andy Jenkins went into the Skateboarding biz, so the main people that made the worldwide Freestyle newspaper were gone. 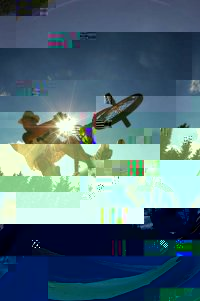 Of course, 'zines had been there before, but after Freestylin' went away, 'zines were the only newsletter bmxers had to keep up with what was going on. That was one thing. The other thing was the new born creativity how to work in an artistic way with it. I remember the first time I Xeroxed a photo on one of a friend's dad's xerox machine. Must've been around '86 or '87 and I was stoked. That was even before the first copy shop in my hometown opened. And from that point onwards bmx was not just the spots side of it for me. My photography along with the graphic illustration of the sport became one. I distributed to almost all `zines on the globe. New friends came with it. Worldwide.

Soon I met the guys of FAT mag, by then the leading and most regular 'zine in Europe, maybe worldwide and worked with them on a regular basis. And yes for years that was a non profit thing for all of us. Even more, we put all our money into film, xerox machines, shipping costs and traveling. It was a whole different era. At least for me. If those people back then hadn't lived the 'zine lifestyle, maybe bmx never came out of the dark again.

Props out to Mark Noble and Brad McDonald and Mike Daily who started color BMX mags in the dead time. So did I in the early 90's with "bmx freestyle magazin" and Klaus Dyba, Kay Clauberg, Ralf Maier later on as well with "Monster BMX" which is now "Freedom Magazin". I guess all the people of the late 80's to the early 90's who contributed to the 'zines did a big part for BMX of what it is today. Some of them are still around today, and that is good.

What ever happened to the StokeBros?
Matt: The STOKE BROS were a BMX / Skate gang of my hometown. Similar to the Curb Dogs in San Francisco with whom we were friends. Back, way back in the day Skaters and Bikers did not get along so good. Sure Skateboarding was anarchy and punk and bmx was jerseys and silly colors, but at some point when bmx came to the streets and we kinda did similar tricks, we bonded. A major part of that beginning was the Curb Dogs, and their driving force Dave Vanderspek (RIP).

The Stoke Bros lived the bmx and skate lifestyle in all categories. Sport, travel, photography and art (related to the street sports). These days the Stoke Bros live in different countries and I'm the only one who still rides a 20 ". But that's a fact of time. Some got married with kids, some got a fulltime job or both. Well, but we are still friends and we occasionally meet. Mostly at x-mas when all return to meet their parents. 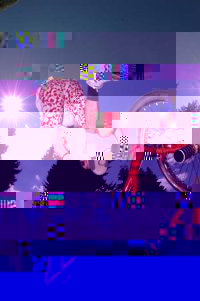 Were you more into riding street or riding flatland?
Matt: BMX wise I'm only into flatland. As you know I always did all kinds of BMX, but since my back is so fucked I concentrate on flat since about 7 years. I'd love to thrash around in the streets but because of my spinal disease I can't do that anymore. I do a lot of individual sports, but only with proper warm up and stretching. My back problem causes enough problems even in the average daily life. Which really sucks. There are so many things I can't do anymore because of my back. But well, that's what 26 years of extreme sports does to your body. These days I ride at least twice a week in the Army sports hall. I opened a flatland club, I am the only member and I am their leader, but that's what the authorities need on paper to let me in...

What's this product you invented?
Matt: That is THE handlebar for all you guys that still want to do tricks from the 80`s. And why not. I'm 1,90 meters tall. The bike that TG gave me may fit my son. A nightmare to get used to. But once I got used to it, the KHE equilibrium runs like vaseline! Still verrrrrrry small. And since the crossbar these DAYS is almost on the stem there's no way to sit or surf on it. At least not with my bum and a foot size 11. So I cut down an ally rack from a worn out trekking back pack and taped it to the new school DA FU bars of KHE. Little sweep, but more like a CW race bar from '86. Maybe TG is going to make some of it in production, I spoke to him last weekend at the "battle in da club"....

What is your involvement these days as far as BMX freestyle goes?
Matt: Not much anymore. Since photography went digital and the magazines get their shots and articles mainly for free from kids that own a camera or a handy. My job as a BMX photographer is gone. Sad but true. Once in a while I attend a contest and do some work, but that's not enough to make a living. And on the other hand I have to make some bucks somewhere else to support my family. I'd like to do more BMX journalism and photography, but there's just no place for me anymore. But still whenever I can contribute to BMX, I do.

-Knokke Halfpipe comp: Someone found my Photo Backpack (approx: 7000 € ) on a Dixi toilet while I sat with Robert Möller, Stefan Geisler and Pat Miller behind the ramp...
-Trier sewage tubes: First ever drunk, slept in those tubes together with lots of the old boys. Maybe age 22. Nightmare. But still managed to become vice German champ in flat pro next day.

-Brixton: Cool scene, lot of bike messengers rider their bmx. Lots of cool sessions. Good clubs there, one of the most fucked up areas I've ever seen. Crime. Gangs. I've lived there for 5 years. Too much to tell. But read the novel "Love road" and find out more. At Amazon, check ISBN: 3 -86683 -059 - 9 978 - 3 - 86683 - 059 - 2
-Mambo: Clothing sponsor of the one and only Skater Martin Herrick. Did support me at some point
-Snowboarding: As long as I did BMX. Still do since I live in the mountains. Outrageous sport.
-FAT-JAM: Wow, first time in the 80's and even then we did old school fashion shows with jerseys and slick pants from the early 80s.That was the beginning of Street jams in Europe. A car, some short ramps a flat area. Elvis MOller from Denmark once jumped my car on an Auburn race Bike with Bonanza tires. He ruled!
-Digital camera's: Destroyed the art of photography. Destroyed my job. But these days, good.
-Traveling: Was good, still is good.
-Thanks: God, to anybody who supported my life through the past years. Too many to mention. Thanx to all of you, Matt