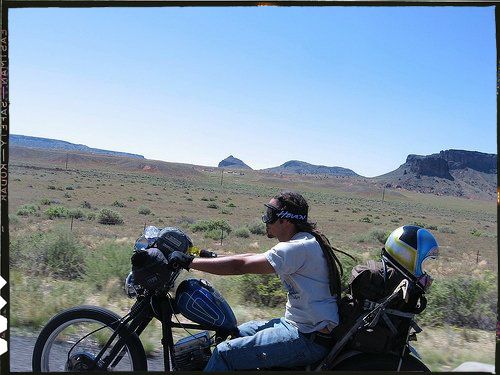 You grew up in Oklahoma if I'm right and got involved with the Hoffman crew there. How was hanging out and working with Mat Hoffman?
Chris: We all met around summer of '83 I think at Hafer park on the 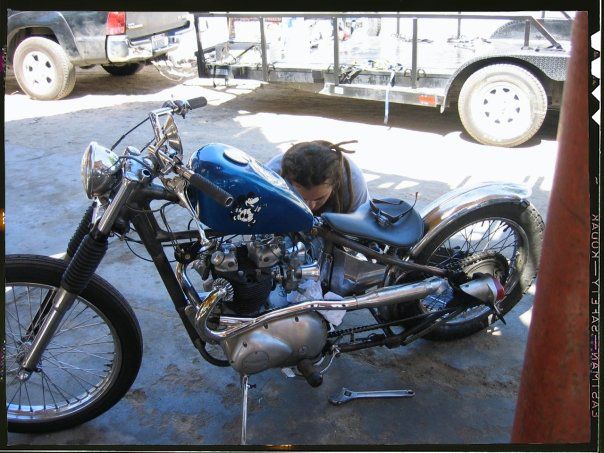 4th of July riding our BMX bikes and having fun. Everything grew from there and it has been a lifelong friendship among a still very tight crew. Wouldn't trade it for anything. Everyone from there is True Family!

When Mat has his manufacturing inhouse in OK, did you like to hang out in that workshop and play with the machines?
Chris: Actually I kinda went off to College at the time and spent 2 years snowboarding. When I came back he did the first big ramp. That blew my mind. In the poster they did I am the guy standing on the bottom facing the camera with Mat some ungodly height in the air. That warehouse has alot of memories and I drive by it pretty much everytime I'm back home. It was for sure one of the best places anyone could have wanted to hang out at.

Already at that time some motorcycles started getting in that 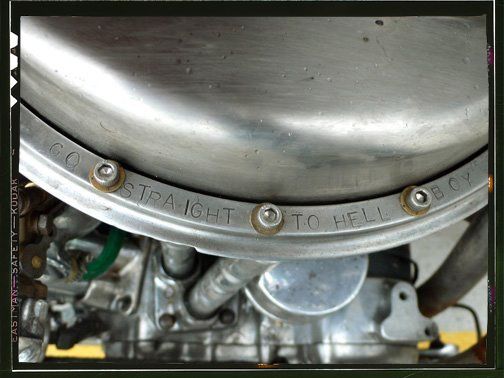 warehouse. Big's old Jawa sidehack, some dirt bikes from time to time, Mat's Evel Knievel Harley Davidson, were you always interested in motorcycles next to BMX?
Chris: Definitely I got my first Harley in 1989. My first Yamaha in 1986. When Big bought the Jawa I bought a 1970 Triumph and that was a fun time. Mark Udell had a 1991 Harley and we all got to spend time around the city on those. I own Mark's 1991 bike now. We also got into dirt bikes and that is the funnest motorcycle riding to me. I don't own one right now but if I had to choose just 1 motorcycle for life it would probably be that. They are just so much like BMX and riding dirt and just having fun. 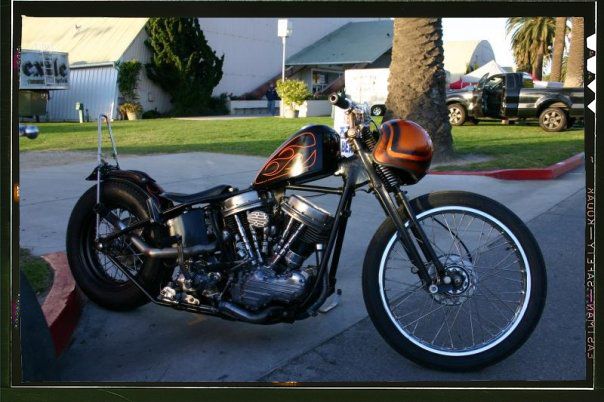 How did you hook up with chopper builder Chica?
Chris: I went to MMI in AZ and was teaching at a school for kids with disabilities. When I graduated MMI I was gonna move back to OKC but Chica had posted a job and so I drove up and talked to him for a while and he gave me the job. It was a great experience and lots of crazy stories. He is very talented and I was stoked to be there. 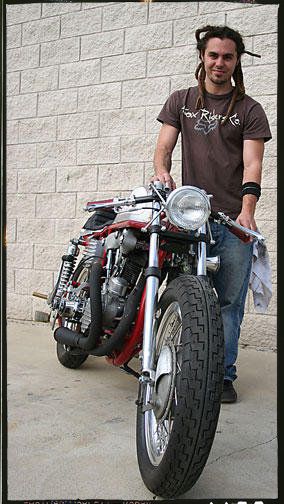 You ended up working for him for a bit, right?
Chris: I stayed with Chica for 1 year. We had a good crew while I was there with Jon on Motors and Jun's incredible fabricating skills.

What were some of the cool experiences there?
Chris: The first day I was there was the final assembly day on a Digger style show bike built for S&S. Chica handed me some stainless tubing and told me to hardline the oil lines. Right as I started getting the tools and setting up he said the camera men will be here in 20 minutes! A little pressure having guys film your first day working on a show bike for the best motor company in the world! Next day was filming it being started up and ridden. The film crew was there and Chica started it up rode around and then handed it off to Jun his right hand man. Jun rode around and we were thinking great scene and bike. Chica then nodded to me and with cameras on I got to ride the bike too. If you have ever ridden a tank shift style digger with super low narrow pullback bars and a long front end its already something crazy and fun. Now say S&S owns the bike and its worth more than your house in Oklahoma. Best first 2 days on the job ever! 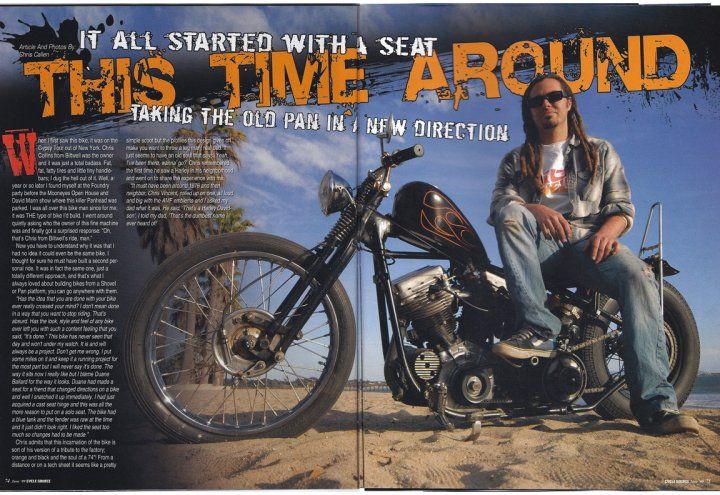 When did you start working on your own bike?
Chris: Well my first Harley I got in 1989 and it didn't run so I tore it down immediatley. It was in a Jammer Frame, Invader wheels and a girder front end. I had the frame and tins painted red and started to put it back together so I guess it's always been a great creative outlet for me. That bike ruled! 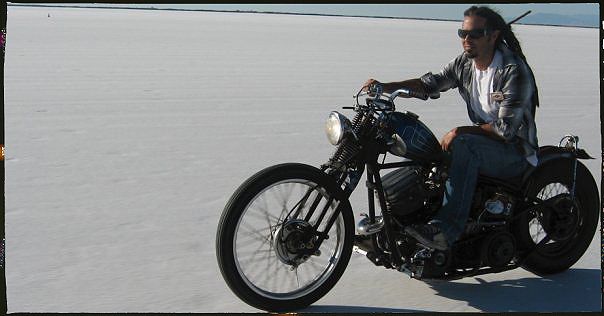 Do you always have an end picture in your head of what the bike will have to look like when you start on a new project?
Chris: Yes and no. Sometimes I do and if it gets finished to that point quickly it may stay the same but some projects take longer and may go thru changes along the way. My Panhead is always changing and there really is no "its finished picture" in my mind I guess. Change is creative and adapting which is great! No one wants to ride the same bike, park, road or terrain all the time. 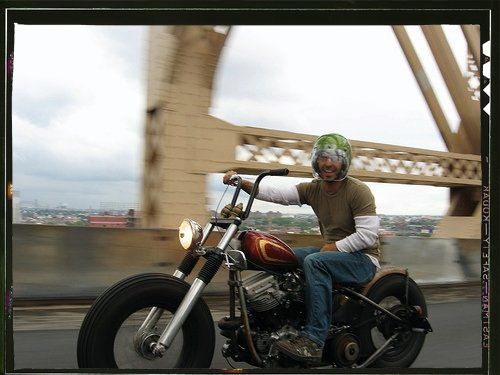 What is the fun part for you when you're designing parts, the computer drawings, the first samples, the testing, the sales?
Chris: Definitely not Sales! It's the whole creative process and making things work in new ways or different lines. A part can be such an artistic piece and sometimes inspiring other new ideas. Sometimes we joke when you buy a part at a swap meet you have no use for and its like "you gonna build a bike around that wheel?" More than not you definitely want too. It's like seeing a picture of say Foster doing a simple table or a color combination on a paint job and you just want to go make something or ride! Did that answer anything? My favorite part is when you create something that drives you forward and inspires more new and exciting things. 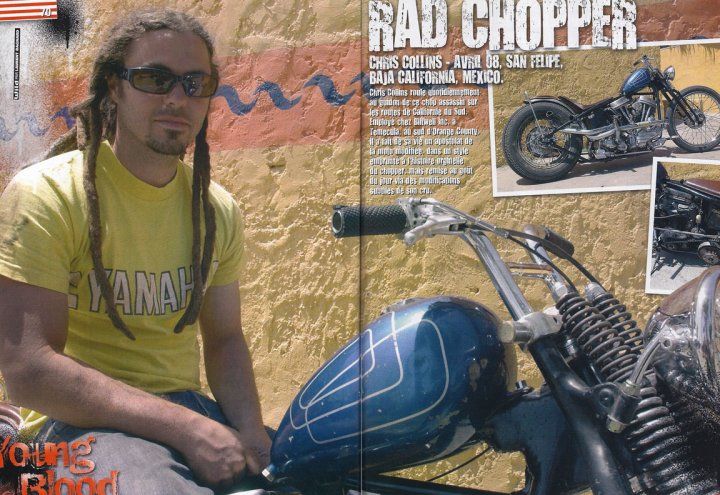 Is there a comparison between the chopper business and the BMX business?
Chris: Definitely! The materials and manufacturing process is the same in a lot of ways. Working at Hoffman Bikes I got to have say in a few designs and they were made in the later years by the same Lady Sherry Shue who owns the majority of Biltwell Inc. Going to Sherry's factories in Taiwan and working on all the Biltwell stuff was great! Making parts in Taiwan not in the U.S. is not always looked at in the best light here in the states but I tried to do the best I coud with quality for Biltwell. I am stoked on a lot of the parts I designed and had made while I was there.

You worked for Biltwell for a while running their program. What did you do there? 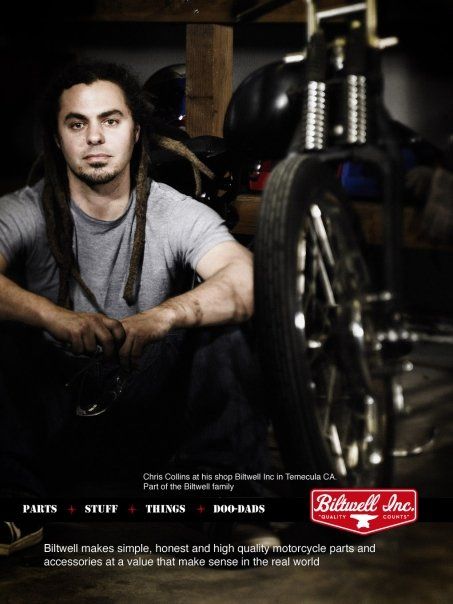 Chris: I was one of the 3 founders and owned a very small part of Biltwell til last Oct. I designed almost everything they have made and worked directly with the factories in Taiwan to get them done correctly and to spec. While I was there I was the only full time worker running the day to day. You wear a lot of hats running a business that way but it's fun for sure. Every day was taking and shipping orders, designing parts and working with Taiwan, giving input to the marketing and working with distributors and dealers, going to and organizing events, rides, trade shows and the list goes on.

What bike are you working on now?
Chris: I currently own a 1961 Harley Panhead, a 1957 Harley Sportster, and I also give a home to Mark Udell's 1991 Sportster.

Any other projects coming up?
Chris: My sister just sold a Ducati so we are looking for a bike for her. I also got some Kim Tab Magnesium mags for Mark's bike cause they look almost identical to Moto Mags. I have some bars, a throttle and a sprocket cover for evo sporties hopefully coming out soon. There is always a few other parts up my sleeve. 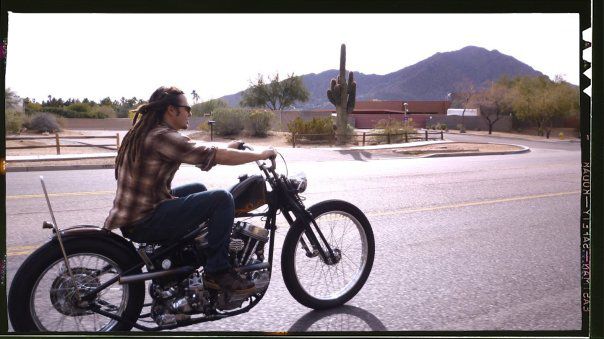