Written by  Bart de Jong
Read 4241 times
January 2006 marked the day that Philip started pedaling his Z12. Okay, it's got training wheels on but give the guy a break, he just turned two. In the October editorial I did not know exactly what Philip wanted to do later on in life when he grows up, but after seeing him have so much fun on his HARO, things are looking up. It's winter now so it's tough to go outside and ride, so the living room has become the training ground for little Philip. 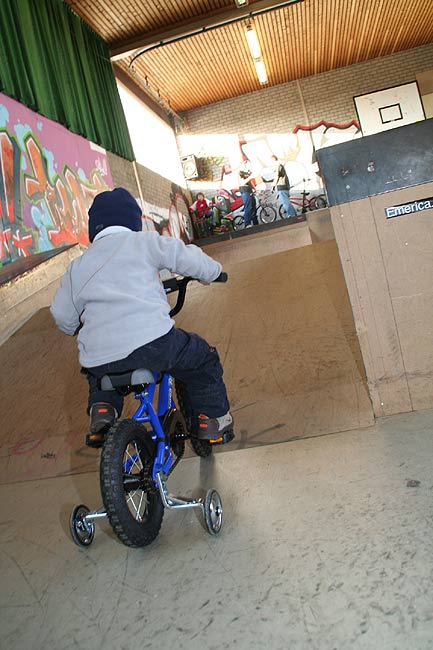 He usually sings a song ("Zo draait de molen") when he begins his practice session. He's now up at 4 interval sessions a week and the schedule is provided by the Dutch National coach. Just kidding of course but you can imagine that daddy was pround to see that little Philip started riding his first BMX bike.

A week after he did his first laps, we visited the NBR jam. Next thing I know Wendy sent Philip on the street course! He had been watching everyone ride and was now ready to join the jam. I had to explain to him that he had to wait his turns and stuff but he wasn't having it. He wanted to ride more. I expected to leave the contest early because we had brought the little one but in the end we had to drag him off the course to be able to leave. Man, the year has started good! 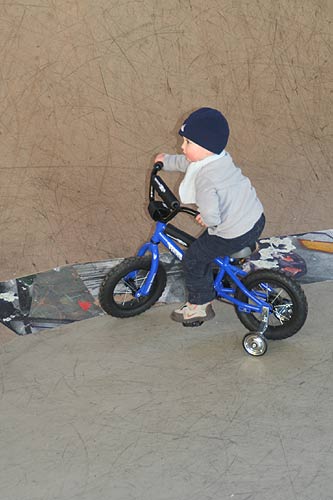 I would like to use this opportunity to thank all the sponsors for the trust in the FATBMX site. Also a big thanks to the contributors and visitors who are keeping this website alive. The bandwidth problem has been resolved (now unlimited data trafic so no more exceeded bandwidth messages!). May 2006 be another kick ass year for everyone. Party on!

More in this category: « Sheila Love escaped from killer Tallinn evening life. We don't know these guys. »
back to top