Written by  Bart de Jong
Read 10732 times
Q: What kind of health care do you get as a pro-rider ? I have seen a video interview with Bucky Lasek and he said he always had a hard time convincing his insurance company that skating is a real sport.
A: I personally am not covered by any health insurance. I have always put my faith in God to keep me safe. I actually did have health insurance for about a year. It became a burden because every time I got hurt I went to the ER. But every time I went, I ended up being fine after a few short hours of pain. I still fit in the low income bracket, so if anything bad ever did happen, Medical is available. Medical is an insurance for income qualified homes.
Q: There are many different comps such as the Gravity games and the 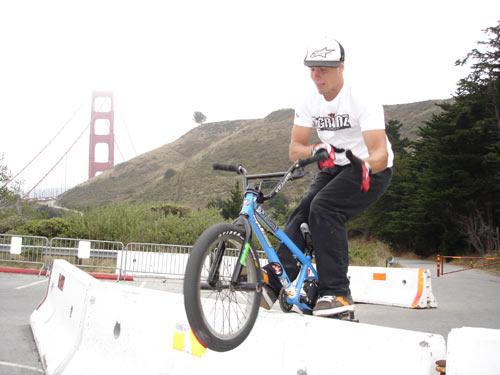 Mountain Dew tour. What is the general opinion with the other
pro-riders as to which is the best series ?

A: I can't really speak for everyone. I have had the pleasure of going
to the Gravity Games the past two years. This year seemed really
mellow. There wasn't much of a "big" contest feel. I think that is what
they were trying to do though. I personally think the Dew Tour is the
best contest series right now, besides the newly instated full face
rule for vert riders. I think the best thing a contest promoter could
do is to listen to the riders' opinions. I think that if any contest is
going to televise their event they should find a way to make it more
presentable to the viewing audience.

Q: Is there one question that you have always wanted to be asked in an
interview but never have ?

A: No one really ever asked me about being the first to do the real
full pipe loop. I guess everyone thought Morgan Wade did it first.

Q: You have your own set of ramps in your yard. How did you get those
built and how do you keep your neighbors happy about the noise levels ?

A: Steve McCloud and I started building here in 2001. For me it was
just a cool backyard scene I could help out with. Then I moved into the
house in 2004. After that Rick Thorne and I just kind of took over and
made it to a legitimate riding spot. We patched all the holes and put
skate light on everything. Right now Rick is in the process of
rebuilding the vert ramp. The neighbors have been pretty cool. We have
renters on one side. The other side is a big house that is always being
worked on and no one ever lives there. As far as the noise levels go,
we never make too much noise. We listen to music and stuff but it's not
like it's a big party or anything. All the properties back up to the
train tracks. So every so often you get a little rattle and a loud
train whistle. If you move to our neighborhood, noise comes free of
charge! But the streets are quiet, so that evens it out.

Q: How does someone go about becoming a pro-rider ?

A: That depends. In 2000, BMX riding became my full time profession. I
started doing school shows with Dan Hubbard and www.stuntteams.com. I
made enough money to live on. Whenever we didn't have shows, I could go
ride whenever I wanted. However, I never felt comfortable to compete in
a contest, at a professional level, until last year. If anyone has a
goal to be a pro, I think the most important thing is to always have
fun while riding. Don't get bummed out if you are having a hard time
learning new tricks. Do the tricks that you have the most fun doing. Or
do the ones that feel the best. From there, you can invent your own
variations. You'll be pro in no time!

Q: One of your sponsors is AlpineStars. Are they crossing over from the
motorbike world into BMX now ?

A: Alpinestars has been supplying some bmxers with gloves for about two
years. Recently they have been building up the clothing line. There
maybe a possibility of seeing them cross over and be a clothing
sponsor in the future. Right now you can check out the video archives
at  www.alpinestars.com for some BMX clips.

Q: You are the flagship freestyle rider for the Supercross Bike
company. Are there any plans for a
signature frame or any other freestyle related products ?

A: I just finished designing a signature bike that is named the
"DISCIPLE". It is one of the lightest frames on the market and only
retails at $199 ! It is even available in my signature baby blue color,
which matches my old Toyota Pick up. We are working on more street
products. Handlebars are in the works as well as a few surprises. Right
now you can get my signature "DISCIPLE" frame through
www.supercrossbmx.com .

Q: What is the best park/spot/ramp/obstacle you have ever ridden ?

A: The water park by my house. Hands down the most fun ever! I ride it
when the water slides are closed, of course. Some of the transitions
are really small. But, there are so many different slides to ride. I
highly recommend checking out your local water park.

Q: You live in California where bicycles are not allowed in public
parks. As a person who needs to practice for
comps all the time how much have you had to pay out from citations over
the past year ?

A: I've probably been hassled by cops about 12 times. I've only been
written about 4 citations. After court hearings, I've only paid $25.
Two years ago, I had one that was over $200 though. To help clarify the
question though, There are numerous cement parks in the Southern
California area that do allow bikes. However, there aren't any that are
comparable to a contest set up. Which is why it is very important
to just have a good time riding with your friends.

Q: Everyone has at least 1 great story that is bmx related. What is
yours ?

A: I have so many it would be hard to pick. Here is a good one. Walter
Peringer and I were out filming one day. Disney had just built a big
concert hall in downtown LA. The side of the building has a big mellow
curve wall ride. There were lots of people all over the place. There
were ushers setting up tables and chairs. There was a line of people
all dressed up waiting to enter the building. To me it looked like a
good time for a wall ride! I had to pedal from across the street to get
speed. As soon as I came onto the Disney property the security guards
came running towards me. I hit the wall ride perfect, but as soon as
landed I had to dodge the people that were waiting in line. I ran
straight into some stanchions while simultaneously being tackled by
security guards. Walter got the whole whole thing on film. He pretended
to be an innocent by stander but the guards were onto him. I knew I was
busted. Luckily when the security guard tackled me he ripped my pants
and hurt my knee a little. I played it up like he hurt me so they let
us off with a trespassing warning. It was heated at first. They had all
the guards around us and we made a big scene. They were preparing for
an award ceremony, so they had to get back to work. I guess we were the
opening act!

Q: Do you feel confident that during a comp if you hurt yourself there
are medical staff onsite that are competent ?

A: I can't say that is something I ever thought of before. The Dew tour
has been consistent with well trained medical staff. I've worked with
Dr K and Dr Dodson. They seem competent. Other than that, I think if
you get hurt badly enough, you can just go to the hospital.

Q: Will you always compete in as many disciplines as possible or in
future just stick to the ones you like
best ?

A: It has been quite some time since my last flatland comp. I think
I'll stick to my favorites. The ones I like best are street, dirt,
vert, and park. But as soon as someone has a pool comp, I'll be there.
I think competing in so many disciplines is tough sometimes. There are
tight practice sessions sometimes and it hard to be prepared. I do it
all in good fun. Competing in them all is really fun.

Q: When you apply to a company for sponsorship to do weigh up the
quality of their product or perhaps that
their product would be suitable for you to represent them ? Could you
see yourself using their product before
getting sponsored by them ?

A: I only consider companies for sponsorship if they have a product
that I stand behind. That way you can be 100% honest when you talk
about it. They aren't paying you to say that they make a good product.

Q: Naturally you cant compete forever. Have you made plans for after
your competition days ?

A: I just started competing. It was kind of a test year for me. I ended
up liking it a lot. I'll probably compete off and on depending on how I
feel. There are lots of other avenues to take to live off of BMX. I
still enjoy doing shows. I have recently done stunt work for two major
motion pictures. "Accepted" and "Stick-it" will be it theaters in the
spring 06. After it's all said and done real estate seems like the way
to go. That is if my back up careers of bowling, karaoke, and billiards
fall through.

Q: What is the nature of your income as a pro-rider ? Do you get a
monthly salary , sponsors share revenue with you ?

A: No, I personally have to bust my butt, and do all my home work to
stay on top of things. I try to spend my money wisely so I won't need
so much to survive. I'm also quite the do-it-yourself kind of guy. That
helps save money too. You can do anything you want if you put your mind
to it.

More in this category: « Thorne keeps sending these updates HARO November newsletter »
back to top