You're quite the versatile rider doing street/park, dirt and vert. How often do you grab that full face helmet getting some practice in?
Josh: I ride vert a couple times a month, It's super fun to just blast airs and just flow around. Vert is at a crazy level right now and you really have to ride it all the time to stay comfortable. I try to ride all the Dew Tour comps and a few overseas.

With so many street riders and so little vert riders these days, do you think the prize money should be divided differently as it's harder to make the cut in street/park? 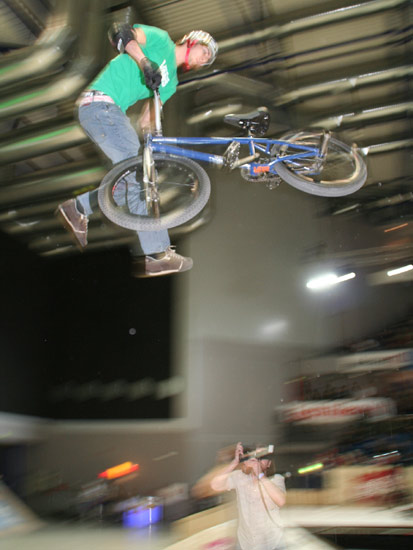 Doing halfpipe shows can be lucrative. Are you offered jobs doing vert shows?
Josh: I've done a few halfpipe shows in my day. It's pretty fun. I'm pretty busy filming and doing contests lately, so I don't really hit the demo's too often.

What's the hardest part about riding vert?
Josh: The hardest part of vert is being able to go high doing variations and landing at coping every time without "buss'in yow' head." Overcoming the fear and just flowing the ramp like Bestwick is insane. There is a huge risk of injury on vert, falling off a 2 story building and landing on your head still hurts even with a full face helmet on.

Are we going to see 40 year old vert riders on the ramp at the 2010 X-Games or is it time for the young riders to get up there?
Josh: Once Bestwick and the few guys who are killing it on vert are out I don't really see X games keeping vert. It's too gnarly for kids these days, and it's not really the in thing to do. The ramps are too big! I think bringing the size of the vert ramps back down to 11 foot would get a lot of younger riders into it and keep vert from dying. People that can blast a quarter pipe on the street course could go to the vert ramp and adapt a lot better. You can ride street/park/trails anywhere with a little motivation. To get good on vert you pretty much need to pack up move to Woodward, and get really serious about it. 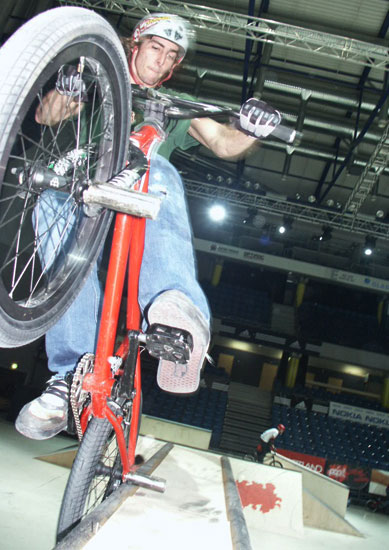 Do you go to New York to ride with those street riders on occasion?
Josh: I've only been riding street in NY one time, and that was with DMC. We spent more time causing havoc than doing stunts and it was amazing. I am going up to ride with the NYC guys soon for the Flipside video.

You've won the Metro jam three times now, how can you describe those victories?
Josh: Winning metro was like a dream. I never had any idea I had a chance. I really like the courses they have better than Dew Tour/X games style courses. Miron lets people show what they can produce on every type of setup, there's not as many box jumps so jumping/foam tricks aren't as much of the standouts. Jam format makes the level of riding at metro insane and lets you get whatever you want done. Winning 3 times is insane to me and it's still kind of hard to believe. 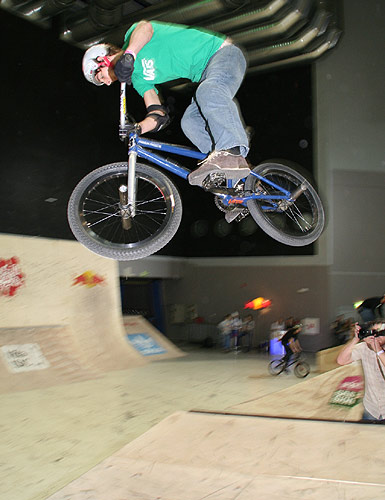 Is riding to you more about the traveling and meeting people or about pulling a trick you've been working on at the next big contest?
Josh: Riding to me is everything. Riding has taken me everywhere. I have friends all over the world from just pedaling around on my bmx. I am really into trying to push my riding because that's what keeps me motivated. Filming video parts is more about showing your riding because you just travel around film and have fun. That's what bmx is all about! These days the stuff going down at comps is nuts. You honestly need to ride foam a lot to learn the crazy stuff that goes down. I really have a hard time getting motivated to ride it for too long. My attention span is very short and I don't have the patience for it. Sometimes I get lucky and learn some move and pull it out at the contest and it feels pretty good! 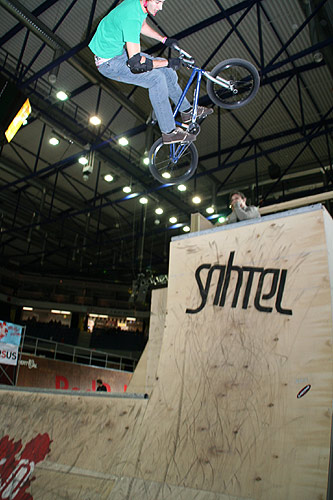 If you could pick one, where would you go: Estonia, UK, Europe, New Zealand, Australia, Hawaii?
Josh: Australia (friends, fun, sun)

Do you think you'll end up in the bicycle industry when you're done riding?
Josh: I really don't know what I'll end up doing. I would like to start some type of company sometime. Don't know what but I think I could come up with some D-Cent ideas.

Do you think of the future a lot?
Josh: I try to not think about the future too much and just live day to day, but the future is on the way. Anything can happen at anytime so it's pretty pointless to try to schedule what you are gonna be doing at 8:00am on Monday morning when you are 50. I just try not to waste money so I can eat and buy R/C cars when I'm older.

What do you believe you're good at that doesn't have anything to do with BMX?
Josh: PingPong, pranks, yard work, eating, having fun.

Who is hard playing Poker with?
Josh: Anyone holding the nuts.

Are you into gambling?
Josh: Gambling is pretty fun. I have actually made money off of it so that makes it a little more fun. I got a little system for Vegas that usually works, so hopefully my streak stays alive.

If you were given a $ 100,= USD bill and had to use it gambling in Vegas, where would you take it?
Josh: That's tough, the system requires more than $100 so probably to the poker table.

Are you stoked on your current sponsors?
Josh: My sponsors are Premium Products, Vans, Oakley and Kicker. I couldn't be more happy with my sponsors. They all support me 100 percent. They don't tell me to win the X games or to film 10 clips in 10 minutes. I just ride and get support for what I do, I'm stoked!

What's your favorite toy?
Josh: OFNA hyper 7 1/8 scale buggy. I'm working on my backyard R/C track with my room mate Stephen Lilly and like playing with those toys.

Who are the guys/riders you hang out with in Greenville?
Josh: I hang out with everyone. Rob Darden, Stephen Lilly, Kevin Adams, Dave Mirra, Ryan Nyquist, Ali Whitton, Mike Laird, Street Pete, Colin Mackay, Marcus Tooker, Terrel Gordie, Jordan Vilonna, Tom McClees, this list could keep going for a while, let's just say there are a lot of riders in Greenville....

Has living in Greenville pushed your riding?
Josh: Living in Greenville has helped me a lot. Growing up I saw so much crazy riding everyday that it kind of seemed normal. I think it helped me not be too scared and to want to progress. Once I started traveling I think I took what I learned from Greenville and kind of started figuring out my own style of riding. I'm lucky that I live in a sweet town with my family and so many riders everywhere.

If you see a good rail, do you have to do it straight away or will you save it for a video part?
Josh: It depends where I am and what I want to do on it. Obviously if there is a trick I know I will only do once I'm not gonna want to pull it without capturing the memory on tape. I love to find a spot and keep it in your head until you finally man up and go get it done. If I see a good rail I will usually slide it for the fun of it and try to go back and get some stuff on film. 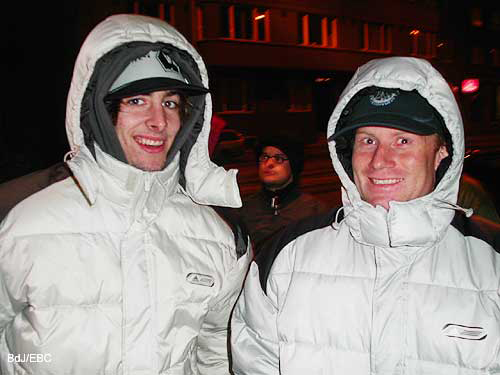 Who in BMX do you admire/respect?
Josh: Anyone that isn't sucked into all the drama. People that ride bikes, have a good time, and don't cry about what everyone else is doing. Ryan Nyquist, Corey Martinez.

Last words/thanks: My family, sponsors, friends, and anyone who I have had some good times with.