Who did you grow up riding with?
Dustin: When I first started riding it was with Nathan Penonzek & a couple other friends just outside of Vancouver. Then, when I moved to Vancouver it was Ron Mercer then down the line to Osato, Miron, Enns, Rob Sigaty & a lot of the badass's around Vancouver.

Do you feel you've been in the shadow of Miron, Osato, Enns as far as coverage is concerned?
Dustin: I wouldn't say I feel shadowed by those guys, each one of those guys is an amazing rider with different talents. I'm not the most competitive person in the world so I'm psyched to be able to have the chance to ride with all of them.....to be honest I've never thought about it. 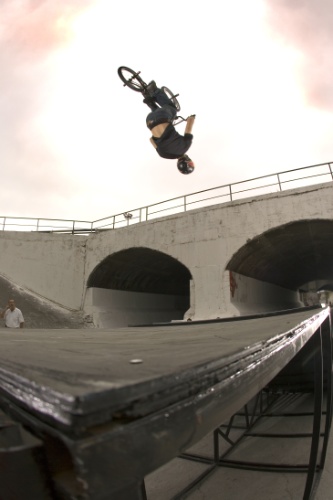 Now that you're on the Redline team you're shown on the backcover of BMX Plus! in the Redline ad, how does that feel?
Dustin: It's definitely different coverage from what I'm used to but as long as the photo & ad look good, I'm happy.....it's cool to be able to have the opportunity.

How did that deal work out with Redline anyway?
Dustin: Rooftop.........He called me one day & gave me as much time as I needed to think about it. At the end of it, I knew if Mike was at the helm it was not only going to be a good thing but it'd be fun doing it too.

Who else supports you?
Dustin: Aside from Redline, there's Square One, Red Bull, Primo, Ten Pack & Etnies flow. All companies that fully support BMX & have the kind of teams that make a trip a helluva good time to be on.

Now that you have more time to ride, do you feel it's easier to progress?
Dustin: Yeah, I've been rocked with a couple good injuries over the last year so it's a little frustrating having the time to ride & being injured. Progression is always there though, even if it's being able to manual faster & longer. 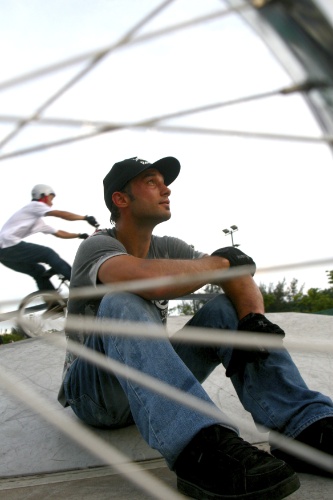 Where do you ride most often?
Dustin: During the winter it's the igloo, during the summer; it'd be Hastings, Parkgate & Horseshoe Bay parks.....good, fast bowls.

Next to riding, what else do you like to do?
Dustin: Since summer is here I've been camping & swimming a lot. There are a lot of towns/cities outside of Vancouver that are getting parks so it's always fun to make a trip out of it. In the winter I'll end up snowboarding a bunch. 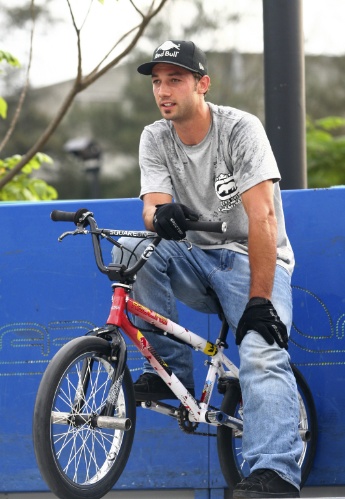 Plans for the future?
Dustin: Get sideways, no matter what I'm doing. Probably sports medicine/physio so I can keep my busted ass moving

More in this category: « Cameron White interview The Josh Harrington interview »
back to top