Written by  Bart de Jong
Read 14661 times
The 2006 street course was all new and looked great. it had something for everyone. Big wallrides, sub boxes, hips, a huge quarterpipe, lots of tech parts, curved wallride, spin, jump box and then add a few original obstacles. If you couldn't find a ramp to pull your tricks on, you probably couldn't do the trick in the first place. The best thing about the FISE street contest is the crowd. They know what's up and interact in the contest. They clap and cheer for good tricks even if they're just small things. No backflips needed but when Thibault Iser did his front flip in qualifying everyone got on their feet to show their respect. Tibo shot straight to the moon, made the tuck and somehow held on to roll out of it. That, together with his tailwhip drop-in from the container earned him a spot in the Pro Street final. It is so difficult to judge one person's riding against someone else's that it took heavy discussions of who made the top 12 pro final cut. In the end Gregory missed out and Maxime Charveron, John Garcia, Dave Freimuth, Tommy Lauque, Kevin Kalkoff, Tibo, Max Vincent, Randy Brown, Mike Miller, Alessandro Barbero, John Heaton and Ben Wallace were all in. 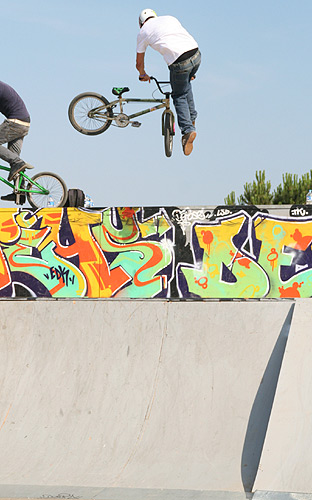 Riding in the top heat isn't very pleasant but it just didn't cool down in Montpellier. There's even a heat wave going on in Holland at the moment. Tommy Lauque tried to ride the final but after one of his runs in the jam session he had to pull out with a hurting leg. Too bad because also last year Tommy showed what he's capable of. 11th was for Thibault who had his mind set on another big trick but after numerous attempts he couldn't pull the quarterpipe to fence transfer. He had big support from the crowd though. 10th was for Dave Freimuth. 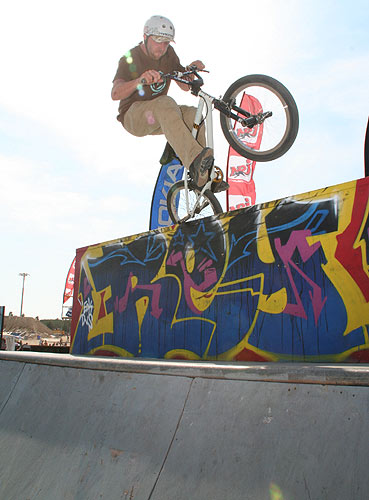 The course had quite a few ramps where he could shine but a few too many crashes held him back. 9th was for Maxime Charveron. The German judges loved this guy. He flaired the shit out of the quarterpipe and flipped the box in his own pace. Kevin Kalkoff started off strong and had a cool style using all the ramps on the course and doing good tricks on all of them. John Garcia got 7th place after qualifying in 12th. John did a huge 720 and an awesome superman and is a well rounded rider. He got some cash for his efforts. Eastern Bikes' Randy Brown had a unique style in where he rides with speed and sees lines that others don't. His sub rail "wallride" and transfers were sweet. Max Vincent is a FISE regular. The Canadian finished off strong in his final turn of the jam session. He's tech and can be burly on demand. 5th. 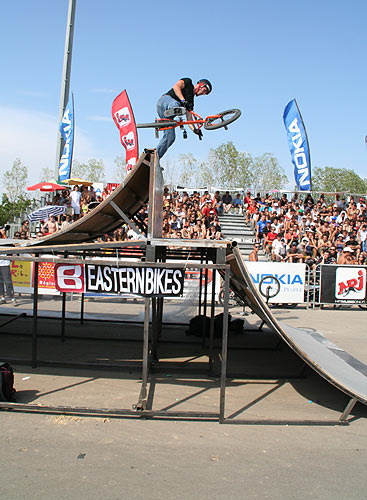 Mike Miller from the UK did very well in Montpellier. His 360 lookbacks and turndowns are priceless but his 3-whip on the box was insane. The top three was hard to decide on. If there would be place for three first places then Ben Wallace, Alessandro Barbero and John Heaton would have got it. The riding of all three was ridiculous and it was hard to decide who got what place. Achim Kujawski, Andy Zeiss, Paul and I were the judges and had heavy discussions that could got up to 45 minutes about 8th or 9t place in dirt or 12th or 13th in street qualifying. 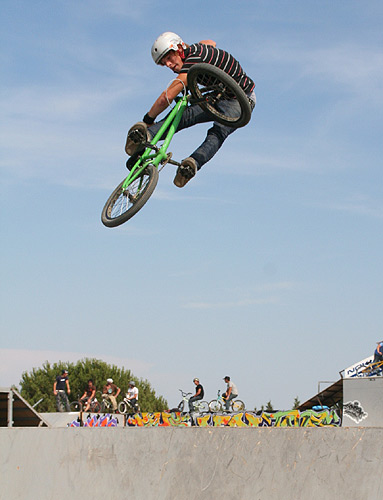 With these riders being so close I was fearing a 2 hour debate of who got what. In the end we all thought the same and had the same riders on the same spots for the same reasons. Sure it was close and there was only one point difference between each rider but on third place we had Ben Wallace. He ripped in prelims and qualified first. After a good night of partying and missing his hotel bed, he had to go straight to the finals in the bloody heat. He was sleeping only 30 minutes before the comp started but Ben amazingly recovered and showed huge flairs, barrel rolls, opposite 360-s, turndown flips, and tailwhips everywhere. He wasn't as sharp as in qualifying but sure he had a good time and his riding still rocked. Alessandro Barbero has got the tricks. It's hard to believe that Alessandro only rides spine ramps and bank to walls at contests as there are non available in Italy. He flip whipped, trucked, 3-whipped, flaired and did a wallride to whip and big 3's over the spine. He had an awesome run but the riding of John Heaton showed a little bit more variety. He was the one hitting the rails on the course and did all the other tricks too all over the place. Heaton won street two years in a row now and needs to come back next year for NokiaFISE 11. 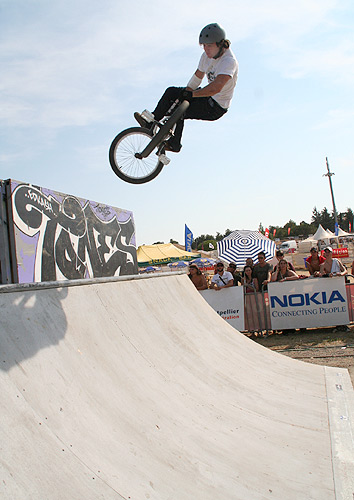 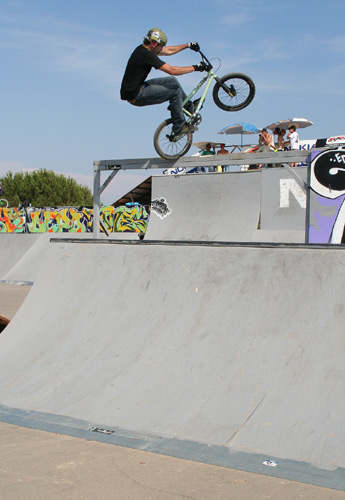 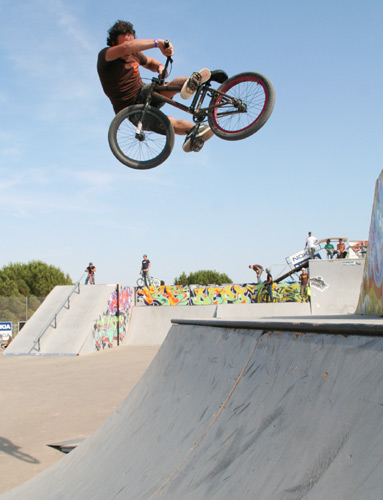