Written by  Bart de Jong
Read 11546 times
For the second year in a row RedBull invited a bunch of riders to ride a drainage down in San Nicolas, Nuevo Leon (Monterrey), Guadalupe,  Mexico. They made a contest out of it and this year the ramps weren't floading down the drain this time. That was good news. 2 Canadians finished on top of the podium followed by a rider from Spain.
Here's the story: 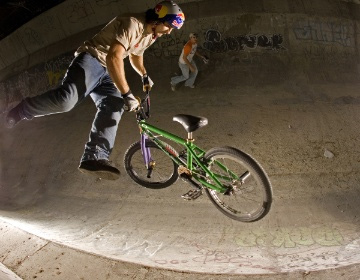 OUR THREE CHAMPIONS, DUSTIN, DAVE AND SERGIO
This year we got lucky, Tlaloc listened to our prayers, we nailed five thousand knives and it didn't rain. The competition started as expected. At 12:00 o'clock, the competitors went down into the sewer ready to give the best of themselves in an unprecedented event. Red Bull Drenaje 2006 has become the most awaited BMX competition by all national and international riders. Dazzling tricks could be seen at all times. 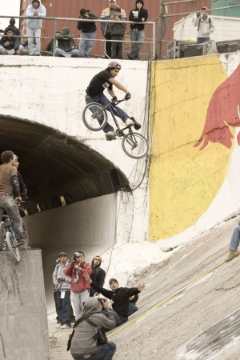 The Italian Alessandro Barbero stole the screams of the 300 spectators when he finished off his performance with a pirouette in the air with a clean fall. The surprise of the day was Héctor García “El Baisa” who won the award for best trick. The judges' commentaries were very favorable towards this young competitor who stands out to become a great BMX talent.
Another competitor that left us really surprised due to his courage and skills was Jorge Olvera “El Negro” who fearless for gravity performed some very complicated tricks.

However, the first three places went to some of the BMX legends: First place went to the Canadian Dustin Guenter, who has already won several awards, among them third place in the X Games and first place in the Vancouver Metro Jam. “I'm very happy, I was also here last year, but I believe this year has been much better overall”. Second place went to the also Canadian Dave Osato.

This experienced rider is already known as one of the best BMX riders worldwide. Third place went to the Spaniard Sergio Layos, who has felt at home in neoleones lands and proved it on the course where he competed without any complications or falls.