Written by  Bart de Jong
Read 6677 times
I guess most of you have heard about Poland. This is the country where the WTP trip took place. Althought it looks shady and most people think nothing interesting can happen there, it can prove them wrong. BMX in Poland is becoming more and more popular. We don't have such strong traditions in bmx like Germany or GB but we're chasing them.
Few weeks ago the second Polish Championships took place. BMXers from all over the country came to Bialystok to meet their friends, have fun and to compete. The Polish bmx scene is very united. People from different cities know each other, visit each other and stay in touch via internet or simply telephones (advantages of bmx not being so popular). Ok I promise that was the last digression.
Everything 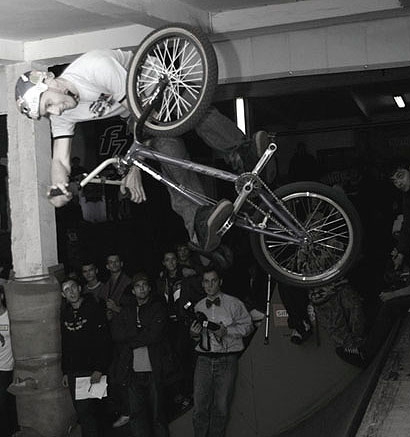 started quite early. First there was training session when everybody could do whatever they wanted (nothing big has happened). After that there was a contest for youngsters. Sorry but nothing worth mentioning happened during that time. Some kids seemed to have potential and only if they stay in the sport they'll have a bright future. Let's leave that boring relation.
Riders in "adult" section were divided into groups of 4 and one group of 5. Because it was such a small contest there were no categories like masters, experts or pros. Everyone in one bag. During the first run everybody seemed to keep their strenght for the finals. Our Polish showman Zombie tried backflips over a spine but organizers made him stop 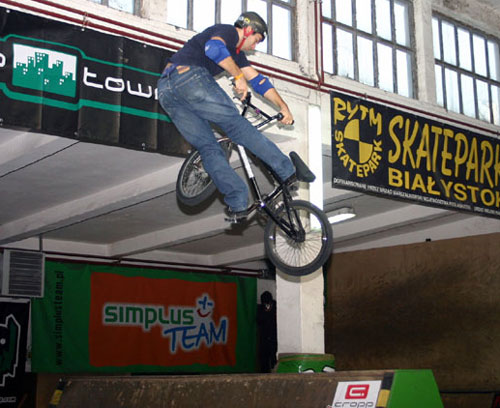 to keep him alive. Everyone did something big in order to get to the finals. Only 10 riders entered them. Janusz Pietruczuk showed that he's the best technican in Poland. Actions like barspin to 360 tailtap to barspin over a spine or 360 tailtap to turndown plus huge airs with all turndown variations proved that the rest of riders have lots of work to do. Daniel Bienkowski tried 360 turndowns over a spine but he seemed to work on it a little bit more. One 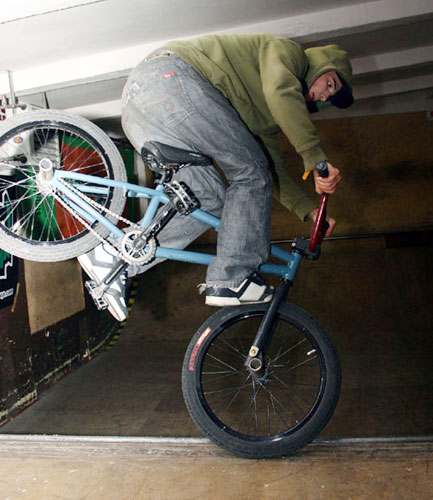 foot tables, regular turndowns, walltaps and impressive airs gave him second place. First place came to Piotr "Rybi" Siegien. He's both a technician and a hardcore rider. Tricks like superman tailwhip on a small funbox, fufanu to icepick nothing to tailtap, 360's here and there all this stuff pushed him on the top of the podium. Also worth mentioning were both sides 360s of Tomek Bogdanowicz, super hardcore ice pick to fakie on a 1,5m tall subbox placed on 1,8 m quarter by Michal Grzywnowicz or toothpick on the same obstacle by Adam Jasinski. Maybe those tricks aren't so spectacular like those you read about everyday but Polish bmx is going forward very fast. A year ago tricks like that were impossible for us and now they become something normal. I should write something more about the miniramp contest which took place the same day but I guess results are all you need. Miniramp was so small that nothing super hard was done. Only technical stuff and some innovative new school moves like corner wall to fakie. Of course after the contest there was a party with girls, alcohol and lots of wild stuff . 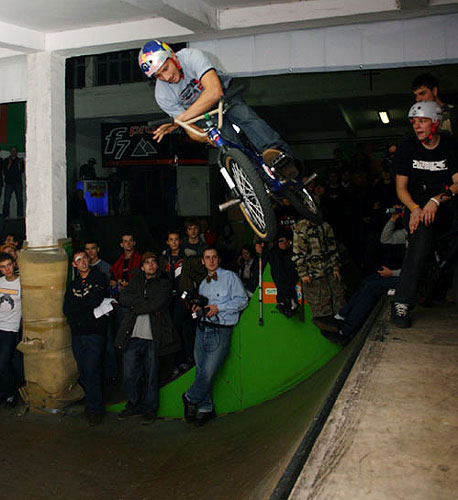 Here are the complete results:

By Paule
Pics by: Maciej Augustowski