Ramp Rats is run and owned by local rider Mike Krainch and is one of the very few indoor parks in Northern California. 4 different classes were held ranging from 15 and under all the way to the Pro class.

Kevin Kiraly from Livermore , CA had an extremely smooth and dialed run in the pro finals which assured him the number 1 payout. Kevin threw in moves like double tailwhips over the jump box and some flairs. 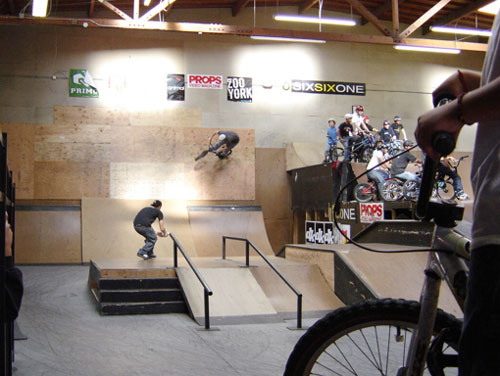 2nd place went to San Jose local rider Nick "Dawg" Valencia who managed a wallride so high he pulled some electrical cables loose out of the warehouse ceiling. Third place went to Joel Hulsey who going for broke in his runs while Chad Bautista and Ben Kellgren scored all the style points.


The other classes consisted of mainly younger riders many of which stayed around till later in the evening to watch the show that the Pro level riders put on. All riders got their moneys worth with a run each and a jam session after. Quite a few seat, cables and DVD's were handed out to the top finishers in each of these classes as well as cash for the Pro level riders.

More in this category: « Loading; by Dwayne Verkade and friends. By Millocal Polish Freestyle champs by Paule »
back to top