“The new ASPT mark and logo provide our property with a consistent messaging and the opportunity to expand under one umbrella,” said Wade Martin, President of the ASPT Dew Tour. “Not unlike NASCAR or the PGA Tour, we want the ASPT to be seen as the gold standard in competitive action sports.”

The new name and logos were unveiled earlier this month at the annual ASPT Dew Tour summit on February 7, 2207. The ASPT Dew Tour logo retains a similar look and feel to the Dew Action Sports Tour logo, allowing partners to seamlessly integrate the ASPT Dew Tour mark into their marketing communication for the 2007 season. 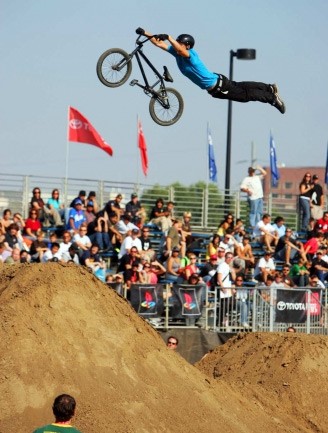 Entering its third year, the ASPT Dew Tour is the most watched and attended action sports property in the world. Attendance for the 2006 ASPT Dew Tour totaled nearly 250,000 and had an average of 38 million viewers tuning in via NBC and USA each year. The top athletes in the world will take part in this year’s Tour, all competing for the highly coveted Dew Cup which will be awarded in Orlando at season’s end to champions in each of the six disciplines. The 2006 Dew Cup winners include Nate Adams (Freestyle Motocross), Jamie Bestwick (BMX Vert), Anthony Napolitan (BMX Dirt), Daniel Dhers (BMX Park), Bucky Lasek (Skateboard Vert) and Ryan Sheckler (Skateboard Park). A complete 2007 schedule will be announced in the coming weeks.

More in this category: « 4Down on da move. Byron Anderson moves to Shadow PD department »
back to top