Written by  Bart de Jong
Read 18164 times
First want to thank Rick and all the VBMX'er staff that made this a great experience!!! This trip almost didn't happen due to a rare tumor I have in my jaw but was able to shuffle some appointments around to get to the Rock this year. Carolyn and I had our hands full at the last minute to get everything packed and I still needed to build the bikes on Thursday! Our 5 1/2 hour trip with a trailer full of bikes was a tad interesting but made it in for the swap meet, which unfortunately there was not a lot of representation? Set up the canopy (MN Faction) and headed over to watch some motos, the racing is so fast at the Rock! 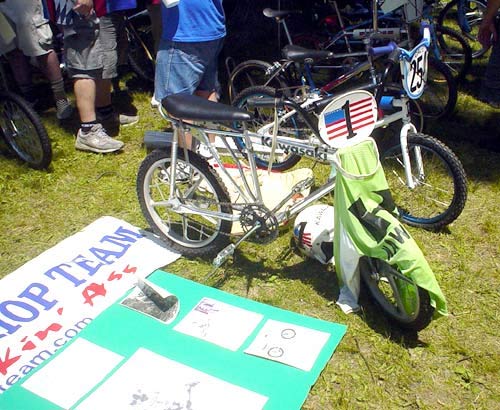 Saturday we parked next to Harry Leary and conversed with him and Shelly in the A.M. while I built the rest of my bikes. When I pulled out my box of stickers for the [url=http://www.jtfreestyle.com/Trips/2006Rockford/81%20Jason%20Jensen%20Torker.htm]Jason Jensen Torker[/url] I then realized I forgot the Head Tube sticker, CRAP!!! Thought putting on the stickers at the last minute would work but now I couldn't show the bike. Proceeded to ask everyone if they had a 1980 style Torker sticker but no luck. Finally ran into Scott, JMC1969, and behold a Torker head tube sticker was available for purchase! Went from an ultimate low to high I was beside myself. I was so stoked I could barely put the stickers on. Ran into Tim Cook who graciously let me borrow a Torker frame pad that I still cannot find at home! Proceeded to setup the bikes at 11:00 A.M., at tad late but better late than never.

The display was some of my history with BMX.

'72 Schwinn Sting-ray was my first cool bike that became a BMX bike while I raced MX.
'74 On any Sunday was viewed and blew me away, had to get a true BMX bike!
'76 Got a Redline '75 Squareback but it was a tad too big for a 10 year old. '78 Became "The Torker Kid" coined by my local shop, Twin Ports Cyclery.
'78 My friends had Mongoose Motomags and always thought they were cool so 28 years later I got one
'81 Always thought the Jason Jensen Torker was so gnarly and was in the April '81 issue for a tech tip.
'81 Been Freestylin' since the first article in BMXA but having a Torker similar to Bob's, I had to do it! 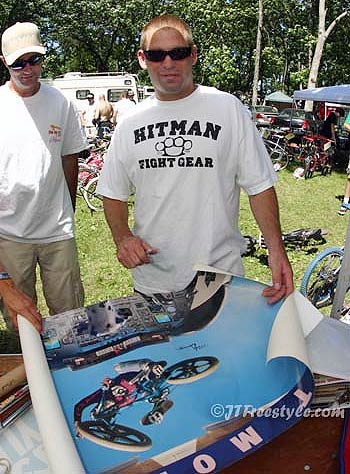 Rumor had it that Brian Blyther and Mike Dominguez were going to show and they did! Haven't seen Mike since '89 so it was a pleasure to see him again. Brian, I see him enough and your frame set is on its way!! The lovely ladies, Amy and Sherrie, were totally gnarly and nice to see Sherrie again since the Joe Kid premiere.

When was the bunny hop contest??? Totally missed it this year unless someone has some pictures to post? Didn't realize that when 4:00 rolls around people pack up really quick! We were one of the last ones to leave but made it back to the clock tower in time for the banquet. We, the MN Faction, had five tables filled and had Robert (from Germany) being as a much of the faction as we were. The food and drink spread were awesome as usual, not for the pig though. Had three pieces of that chocolate cake, hmmm! Scott "the rap master" Towne was totally down with it...thanks for the humor as usual!!!

Wasn't sure what was being presented this year since last year the awards were next to the podium? Scott busted out the story behind the awards and they were totally trick! 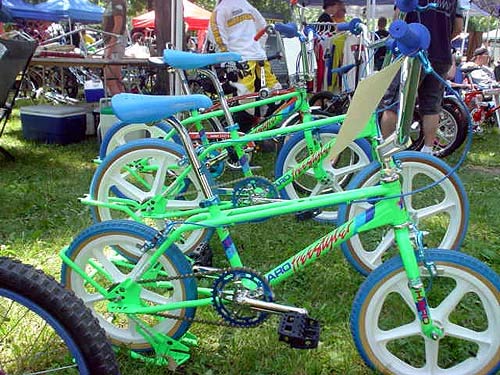 so into others bikes that I didn't even realize that they called my name for the 20" category. I turned to my wife, Carolyn, and asked if it was true? Honestly was shocked due to all the gnarly bikes out there. Hats off to all the other rides that were built in such a competitive category.

What can I say about Harry Leary...he's a class act and hearing all about his experiences, good and bad, were a pleasure. From the Lincoln car joy rides, Sandy Finkleman, and all the BMX...it was flashback to those wonderful days of BMX. Harry picked on Greg Hill a lot but it's all in fun! He also mentioned how the Freestyler's like Dominguez took all the $$$, Mike had a nice grin on his face. There was so much said and the Question/Answers had a lot of interesting comments too! 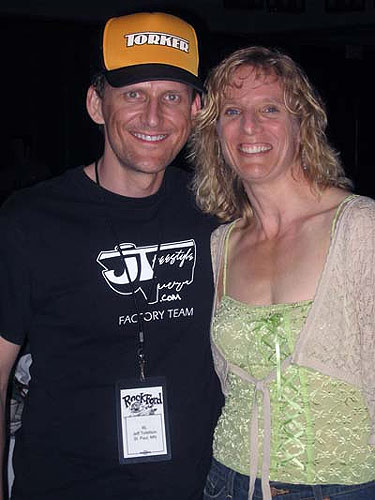 Big Daddy Eric Rupe showed up at the banquet for awhile! Wheatus the band, yes we had a band this year and they went off. Sunday was race day and I may say that racing on pavement when it is wet is so NUTS!!! I saw so many crashes and wondered if the riders weren't used to riding on the track wet? Once it dried up a tad things seemed to go much better.

There were so many awesome bikes and didn't even have time to check them all out. Was blown
away by all the fabulous rides. With getting a late start and answering so many questions I usually take a ton of shots but this year I was too busy! Here's what I have and enjoy!

Jeff "J.T." and Carolyn Tollefson A.K.A. RL & The Torker Kid

More in this category: « NBL/UCI Elite Series Champions Announcement New Poll on FATBMX. Vert is going crazy »
back to top