Trying to figure who this guy is.

Written by  Bart de Jong
Read 10555 times
Over the weekend I was at a local DH race in Fontana, Ca trying to hook up with some people I hadn't seen in a while and meet some people I have never met. I ran into Nigel Page, Cody Warren, Brian Smith, Eric Carter and met JD and John Swanguan (the inventor of the rock walk). However, there was one person around that Eric Carter was looking for to introduce to me. "Where's Phil?" he asked someone and there he was. I couldn't figure out who the hell he was but he knew my last name when I introduced myself. 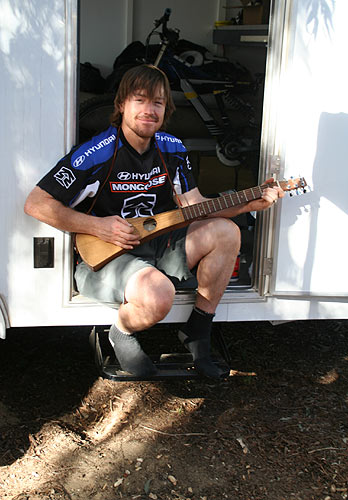 I was puzzled who this person was who looked like 27, had half long hair, was a bit chubby (only a bit) and was wearing Mongoose DH MTB racing gear. He must have just finished his class and while he was hanging out with EC and the rest of the pros, I figured he raced the pro class. Mystery man (to me) started talking about the good old days of BMX when he came over to Holland and stayed with Addie van de Ven and brought up names like Leon Walravens. He said he raced the indoor in Rotterdam and got on stage with Andre Hazes and the show girls. 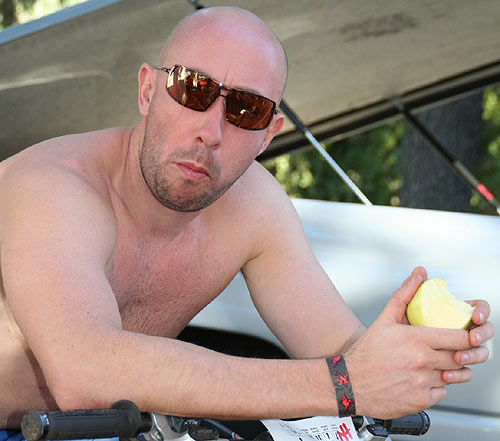 He remembered all that and spoke a bit Dutch too (trek je broek uit - tot ziens, that kind of stuff). He also raced the muddy track of Arnhem and when I asked if he ever raced in Slagharen he said that he thought he did. My mind was playing overtime. How in the world is it possible that I don't know who this is? I was at those races and must have tracked down all the Americans with my autograph book but I can't remember a certain "Phil". For a second I thought it must have been an unknown young "Blue Max" rider just like I don't remember Brian Gass racing at the 1983 IBMXF World's in Slagharen. Again, I couldn't figure it out.

Mystery man started playing a little guitar at EC's set-up and continued shooting the shit about the old days. He had a chubby finger too just like Tracer Finn. He brought up a story about Tracer playing golf where he was wearing gloves and the pinky finger was pointing the opposite direction because there was no finger in it. He was there at the moment that Tracer lost the pinky at a race and grabbed the glove, that still and the finger in it, and gave it to the doctor. These were CW days and I was still trying to use the stories to give this man the proper name. When I left, he even asked me what his name was and while I was walking away I replied with "Phil". At least that's what I understood that EC said in the beginning. They must have noticed that I wasn't sure who I was talking about. While driving back to McGoo's house in Lake Elsinore I was putting the pieces together. 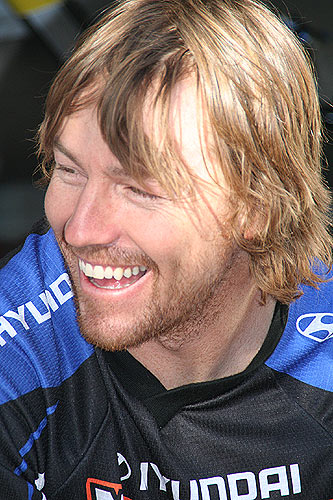 This was fricking "Hollywood Mike Miranda" I had been talking to. I didn't even take a photo of him, something that my brother did when he met him at the Hardrock in Las Vegas during Interbike (I was gutted I missed out on that night). Man, I felt so stupid that I had not noticed any sooner or had asked for his last name. He would have replied with "Falvy" which would have made things more confusing.

You see, McGoo knows the ins and outs and helped me out with this one. "Hollywood" Mike Miranda changed his last name after finding out who his real dad was. Instead of "Phil", EC was looking for "Falvi" which didn't help me anything anyway because I didn't know he changed his name.

The former CW, Hutch and Torker BMX pro had actually made it to Slagharen too in 1984 when McGoo took him there on the Torker tour. I'm sure I've got his autograph from that trip. The fact that he looked so young had caught me off guard. I was thinking late twenties instead of early fourties. The fact that he was a little chubby was soon forgiven. Sorry Hollywood for not recognizing you in Fontana at a DH race. It was good talking to you.

More in this category: « ABA U.S. Nationals-- Roseville Vintage BMX Gathering Rick Thorne is staying busy up in Hollywood »
back to top