February 2003: And you thought you were old school? Interview Thom Lund

This article was originally run on FATBMX in February of 2003. Why not post it again. A little history brush up never hurts. I had always thought that Bob Haro invented freestyle in 1978. That is until Crow sent me pics from 1975 of John Palfreyman and Thom Lund riding pools on BMX bikes. That's pretty BMX freestyle to me. But there is more to it. Crow had interesting stories and background info on the DogTown movie that Stacey Peralta directed. We interviewed Stacey in an earlier update on FATBMX.com and did not get much BMX 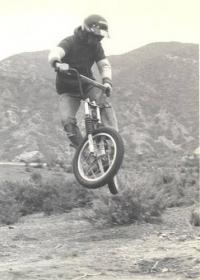 love from him. Crow's info and Thom Lund's interview show you some interesting background on this. If you're into BMX history, you'll dig this!

"John Palfreyman and Thom Lund were OG Dogtown skaters and BMXers. Stacy wouldn't put em in the movie cause he is a lame ass poser and the whole skate/bmx war is a result of his trying to move in on the Dogtown scene back in the day. JP slashed Stacy's tires when they discovered him at one of the sacred old pools that JP found and cleaned. Stacy was there gettin photos with Stecyck. Posin. He never cleaned or rode pools, he was just an opportunistic ho. He only told HIStory with that movie. The true hardcores of Dogtown weren't even represented. Many were never heard of. Thom and JP lived with Jay Adams and BMX in pools happened at the same time as skating and the true OGs did both equally rad. Ask Jay who the raddest was. ask Shogo or Wentzl, they will all say JP. That Dogtown movie pissed me off and the truth must get out. 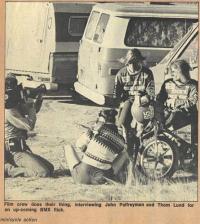 The pics of JP and Thom Lund are from '75, well before Haro was "inventing" freestyle. I love and admire Bob but until recently talking with the new school kids didn't realize he was the inventor of freestyle. I remember Bob the cartoonist, and Bob the amazing rider, and Bob the guy that made plastic brake levers, and Bob the reporter of the emergance of freestyle, but seem to remember ALOT of people doing tricks on bikes way before Bob, many of em on 26" cruisers, Still know some of em. Thom and JP were always my starting point. I am in regular contact with them and they would be glad to do an interview. Either send me some questions or I can hook you up with Thom via e-mail if he doesn't mind. The whole skate/bmx war began with that tire slashin incident, SP is a career hater of bmx. Too bad, JP and Thom could out skate him too. There were many unsung left out of Stacey's vision."

Interview with Thom Lund. One of BMX's originals

When and where did you first see a BMX bike? 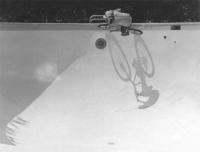 Did you ever race at BMX downhill tracks like the ones in On Any Sunday?
Thom Lund: I don't remember the Downhill in the first movie. I did race the Downhill's of the day Solidad Sands, Upper & Lower Yarnell, Randall Ranch, Saddelback, Corona, Poway and Merrit Collage I think it was up in the Bay area. Yeah all the good ol gnarly ones, on my Mono Shock and Side Hacks.

Did you ever race one of Scott Breithaupt's races?

Thom Lund: Don't make me fucking laugh, we were just talking about that kook. When I rode for Rick's Bike Shop we would go to 3 races on Saturday. His little BUMS scene in Long Beach was our 2nd stop of the day. I beat his ass so bad, at his own track he had to retire. Scott keeps telling me I won the 1st Pro race at Saddelback, he promoted it but I don't remember. As the story goes Dave Clinton broke his Kawasaki frame flying down Bonzai hill. I crashed down Bonzai and they restarted the race. So the top guys are busting frames and getting totaled, where's Scott? Announcing, he can kiss my ass.

Where were you when the Yamaha cup race was held (LA)? 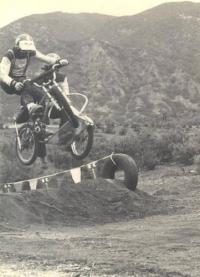 Thom Lund: I had crashed at all three qualifying races, rode my 50+lb Mono at them. For the L A coliseum I had switched to Rick's Bike Shop from Dirtmaster. Rick had it going on new Webco frames new Moto mags, had the bikes with covers on them and rolled them out. Just factory red carpet kinda shit. I got fastest lap time and qualified, JP got 2nd fastest. In the main I was in third pulling up along JP, Friendly Fred in first. We hit the first jump a water hole thing and JP falls over to my side and bam, done big pile up, from 2nd & 3rd to last and dead last. My crashing streak continued. Regardless of our finish, it seemed to still leave some type of impact on the sport. That was Rick's doing, that image of a Factory Team.

Did you have local tracks available or were you building your own?
Thom Lund: Palms and Malibu would have been our "local" tracks. But we did a lot of dirt lot and riding in schools, fire roads anything. We would stay with Dirty Ernie (Ernie Alexander) sometimes and we would go build up the jumps and stuff and he would come out and start going off about how we were going kill they little kids and shit. He'd have to go out and knock the stuff down. 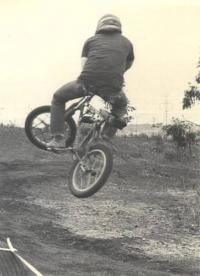 Side hacks for how many years?
Thom Lund: Pretty much the whole time.

When did your interest involve freestyle tricks or freestyle riding?
Thom Lund: I don't know about tricks, I mean you always had some little thing you'd hit on your way somewhere. As far as jumping you were always pushing that, if you were by yourself, with your boys or terrorizing someone's neighborhood.

Were you aware other people were doing the same thing somewhere else?
Thom Lund: Well we raced early on, Palms Park and then the valley guys showed up at Malibu. Mike Devitt, when he had Bike-ette did take me and Tom Finnvers up north early on 72-73. So ya, but I was lucky. 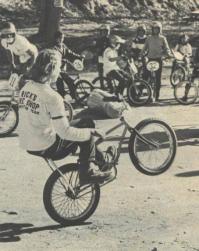 Who were the first guys trying tricks on bikes or riding different terrain than BMX tracks?
Thom Lund: OK well if we are gonna make some claim to fame here, around 1975 me flying down Bonzai over Bob Phillips doing a one hander. JP pool riding the Key Hole. Both are documented with pictures. The birth of Freestyle Jumping and Vert, until proven other wise, regardless of what Scott Bridethop says.

What made you decide to ride side hacks in pools?
Thom Lund: Crack...no we never did that me and JP talked about the possibilities, but never.

What skate parks were open to bikes back in the day, and which ones weren't?
Thom Lund: I don't think any, they were just starting to open back then in 76. 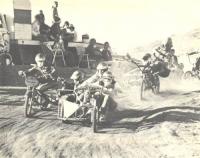 Who would you run into at the park on a regular basis (BMX)?
Thom Lund: JP, just me and him sessioning the Key Hole. JP was the first bike in the Baldy Pipe too.

Was Bob Haro one of your mentors/idols as the Godfather of Freestyle or did you feel you were involved even before Bob got into it?
Thom Lund: You keep mentioning the Freestyle shit, we didn't ride around doing hand stands in fucking neon shit. I was before Bob Haro time wise, if anything he was more likely looked up to people like JP, Dave Clinton and myself.

Did you ever enter freestyle contests?
Thom Lund: no

Was BMX your lifestyle, hobby or job?
Thom Lund: It was my life.

Your name seems to have disappeared a bit on the BMX scene. Did you get your share of BMX coverage back in the day?

Thom Lund: Yeah, I was in a lot of ads, posters, catalogs along with pics in the mags, chicks, factory bikes etc. Since '99 I've been involved in BMX helped get a track going in Medford Oregon worked trying to get another going also. I had been racing 41-45 cruiser class. I do some work for the Bike Industry print & sew stuff. So it's all cool

What made you decide not to stay involved in the BMX/bicycle industry/scene?
Thom Lund: I wanted to race motorcyles. Spent a few years in Europe racing International & World Championship GP's on a Sidecar with JP after BMX. Lived in your wonderful country of Holland.

To wrap things up, give us a good story/memory of an incident from back in the day.
Thom Lund: In 1980 we had to go to the RAI (?) convention center in Amsterdam to a Motorcycle and I guess Bicycle exhibit. We hung out in the booths for our sponsors. Jeff Bottema and Toby Henderson were there on I believe a Raleigh tour, doing a show. Somehow JP got hooked up to ride a BMX bike for some distributor. He was supposed to do some jumps and stuff. I think they had a car or something out there. Anyway, we were hanging out and Gerrit Wolsink and Roger De Coster are there. Somehow DeCoster bets JP he won't ghost ride the bike over the big jump. So JP is out there riding around in this show and for the big finale shoots the bike off into the air over the big jump. Man the bike was just flying out on it's own, smash. You should have seen the look on De Coster's face, oh man it was hilarious. People tell me Roger still asks about JP.