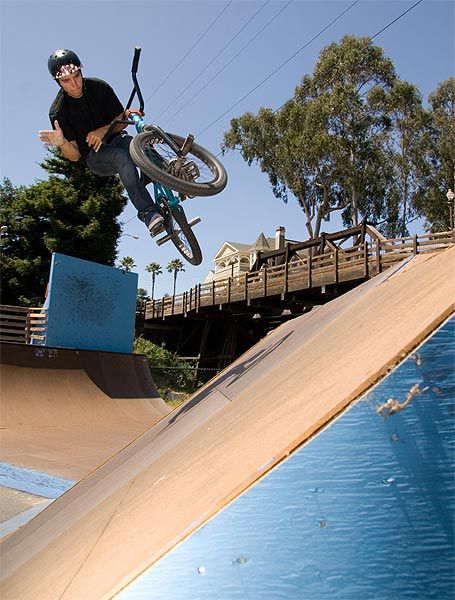 For Jarrod's interview I gave him a few key words and he elaborated on them. We had about 2 hours to shoot some photos so we were limited to one spot : the Fun Spot. The photo taking process was hindered for a few minutes by an obtuse Santa Cruzian asking me odd questions about cameras. He easily could have been the grandkid of the Zodiac killer. The park itself is right next to the beach so the weather was really warm and there is always interesting foot traffic going past. Afterwards Jarrod went home to pack for the European tour he was about to go on with musician Jason Mraz and I headed to the airport to pick up a friend. About 2 months later here is Jarrod's interview.

Mraz: is one hell of a good person and one of the best musicians in the world. It's too bad his label restricts him. Check out his websites jasonmraz.com. Also, we made a couple vids of our trip to Europe. (which are here) 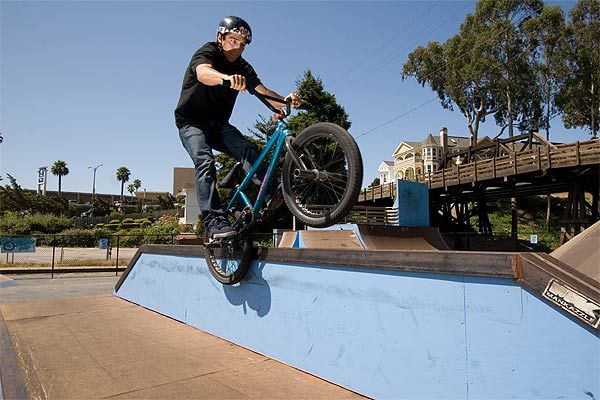 2-Hip: 2hip is a branch of ronw's life. I've learned a ton of life lessons with ronw by my side. That‚ actually a good way to explain how ronw/2hip is. He is someone that stands by your side to help you see things from another perspective. Whether it's life‚ obstacles or an obstacle to ride on, he is there (100% in a positive way.) 2hip is real. People that are invited into 2hip are real. These days it seems everyone just wants to make everyone else happy. 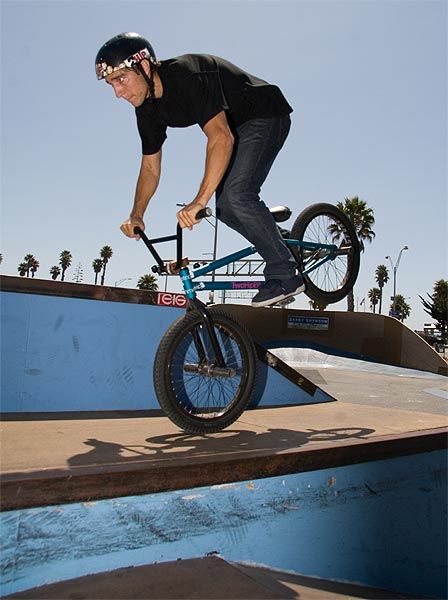 I think that causes some, or even most people, to sacrifice their happiness. Why would you want to be unhappy? Just like 2hips motto "keep it real", remember that your happiness and honesty brings others to a trusting and more confident life style. Keep it real. 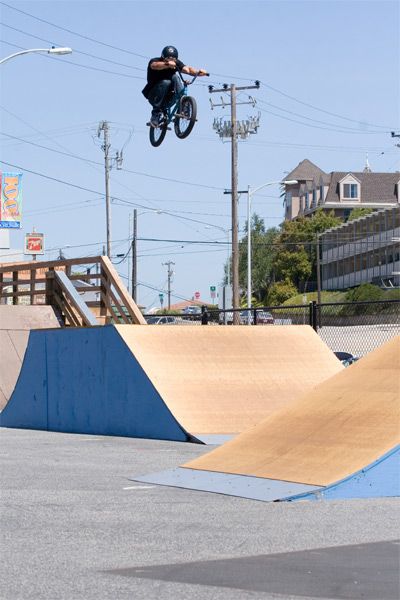 Santa Cruz: is my home. They say that home is where your heart is. Nope. Home is the place you know inside and out. When the settlers took over this little town by the bay, natives cursed. The curse is: anyone that settles here will always be able to see their dreams but never be able to reach them. I was born and raised here and so far I have accomplished multiple dreams. I continue to push myself now and I will set the bar higher everytime. I can't seem to leave Santa Cruz for more then 2 months at a time but everytime I come back I have a warm welcome. So maybe the curse isn't real. Maybe home is, where the heart is. Maybe my heart beats strong in SC. Maybe the curse is real and I won't ever be able to reach that ultimate dream of mine, but then again I am native. 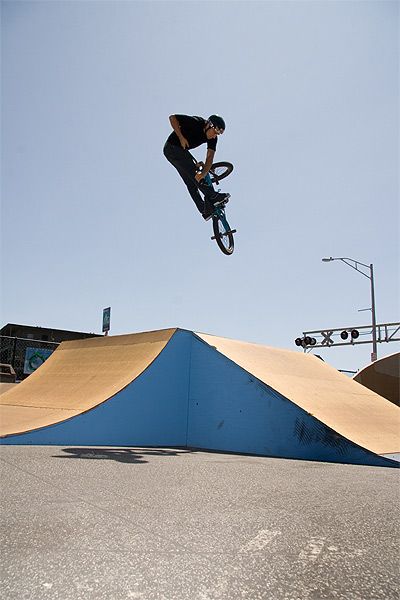 Fun Spot: gets announced over the loud speaker of Roaring Camps passing trains. That's weird, that train is a huge tourist attraction and everytime it stops the locals at funspot put on a show... the tourists clap and then it's over. But in a way a smile is shared. Thanks to Bike Trip bicycle shop and Santa Cruz county we have this bike park. Jesse Nickle (vice president of Berry Swenson Builder) asked me to help him re-design an old wooden skate park into a half new bike park. Berry Mitchel (Owner of Bike Trip) donated $25,000 in support which manifested as some new wood and Berry Swenson Builder donated 3 men and 9 days of those mens labor costs to this transformation.. It was a long time coming for about 3 of us in Santa Cruz and now it seems that more kids are enjoying the sun and bmx is making some sort of an impact on the SC community. 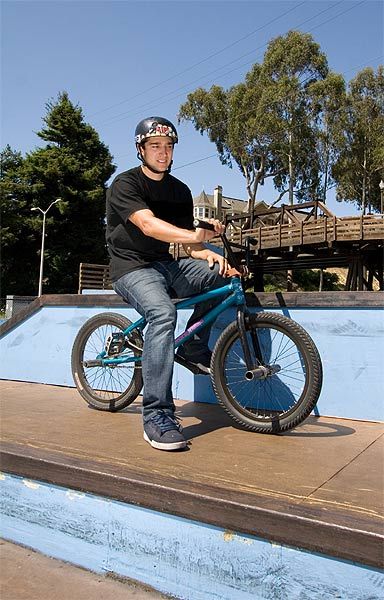 Influences: is the effect of one person or thing on another. I am surrounded by people who are this. Some know it and some don't. I don't wish to name anyone, it might blow my cover.

Riding: When I was three, my Dad took me to the flee market at the local drive in theatre. He bought me a sweet ass lil‚ Huffy 16 inch bike with training wheels. A day later I asked Dad to take the training wheels off. He said, "SON when you can take them off yourself you will be ready to ride without them". What Dad didn't know is that I'm a 20 year old trapped in a three year olds body and I am an expert mechanic. 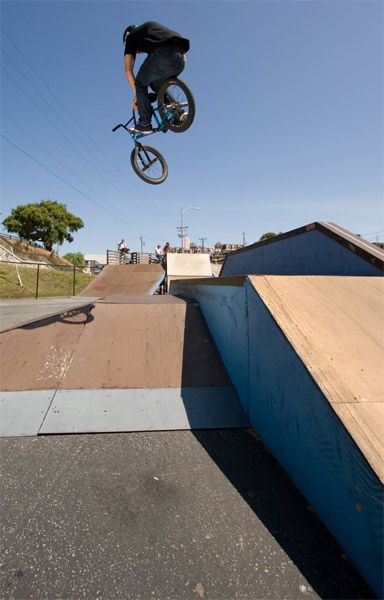 I got the training wheels off, lined up at one end of the deck and counted to three. By two I was rollin, by three I was headed towards a set of stairs that came at me as quick as fast food gives you cancer. I pulled the three stair shuffle and rode out of it like a pro. Two years later I saw the movie Rad (which ronw does stunts in) and I was hooked. When I was about 7 I saw a traveling airshow put on by GT bikes. They did flips and spins and all kinds of crazy tricks on bikes. I still remember how that made me feel, and for that same feeling I do shows with 2hip so that I can pass on that blessing. Today bmx is still driving me to accomplish new things. It has introduced me to heroes and taught me how to be confident. Everytime I step onto my bike I feel the feeling that I felt when I was three. 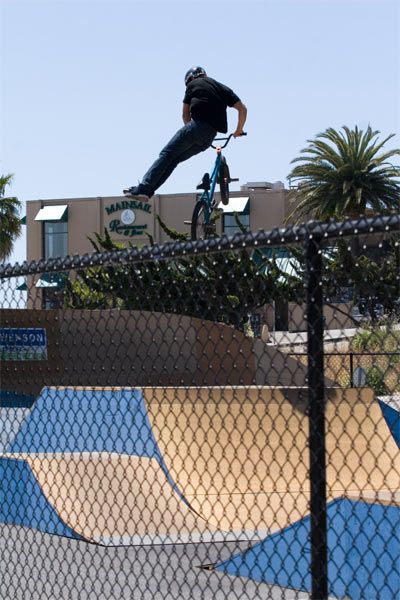 Mediocrity: is a noun and I had to look it up. It means, for something to be in the act of second rate or average in quality. I don't live my life like that and no one should ever think they are mediocre.

Video: the perception of life created through my eyes can be shown through this.

Travelling: recently I have had the chance to see a few pieces of the world. I have the traveling bug but this bug doesn't make you sick. It teaches you lessons that you can't create yourself. You get to see places and meet people (whose perspective on life differs hugely). The world can be as small as you want it or as big as you can imagine it. Explore it!