Written by  Bart de Jong
Read 5074 times
FATBMX provided Cathy Bluem with a media pass to visit the Arby Action Sports Awards up close. She caught up with BMX Award winner Ryan Guettler and talked about the victory, tricks he's got in the works and his plans for next year.
-How does it feel to win?
It feels fantastic, I know you guys all voted as much as you can. To be honest when they told me I got nominated for two events, I didn't want this, I wanted to go home (to Australia) it's winter here and I'm getting a cold, this was like two weeks ago, and they told me that I better stay. They couldn't tell me if I won or not but they told me I was nominated and I should stay. Which hinted to me that I might win one of them. The first award came, Comeback of the Year, I really didn't care about that one because it basically meant you crashed and got back on your bike. I wouldn't know what to say for that one so when I lost it to Brian Deegan, it was okay. But for this one (BMX) I didn't know who I was nominated against, so when they were announcing the nominees, Jamie Bestwick, Ryan Nyquist and Anthony Napolitan I figured there was no way I was gonna win this, I'm having such a good night anyways so there's no way I'm gonna win this. Then the chick turned around, and I was like woah, then walking up to the stage, it was the coolest feeling ever. 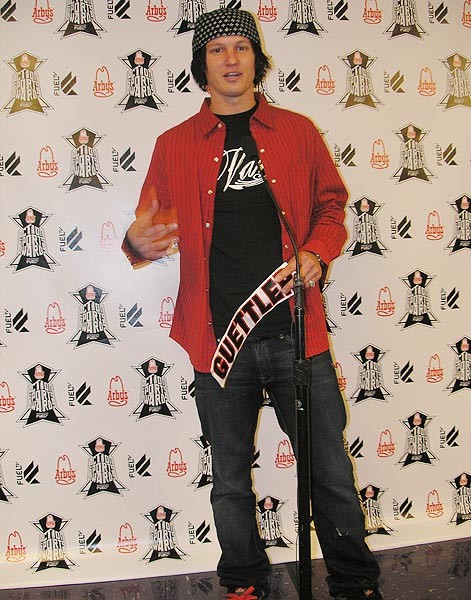 I just couldn't thank enough people. I mean 2005 was the best year ever and with this being 2006 and people had to vote to see if I got this, I felt like I didn't have a good year with all the crashes and only winning one contest. It makes me feel like my peers respect me more or something, it's the best feeling in the world.

-Are you glad you stayed?
I'm glad I stayed, I wished my parents and family could have been here. I mean Jerry's the closest to family here and I dragged him on stage and probably made a fool of him but I kinda wish my family was here and I could be with them. But I will be with them in 3 days which is gonna be the best thing ever. I'm just so pumped, I wished I could have grabbed the person that voted the most and give this to them. It definitely felt like I didn't deserve it all. I guess I kind of got the recognition from the year before.

-What are you doing next year?
Since my crash I've been working my butt off. There haven't been many contests lately so I've just been doing ads and photos that will come out real soon. Stuff that no one has seen before. I'm so stoked on my VANS ad, took me four days to do it, can't wait for it to come out. It almost feels like the Rocky story where the 1st one he trains really hard and wins and then got caught up in the publicity and falls behind, which is where I feel I'm at. Next year I'm gonna come back and work my butt off. I'm gonna work with my brother when I get home to get my fitness back on track. I have all the family and friend support and love so next year is gonna be big I guarantee you.

-What's one trick you want to pull next year?
Double Flair. I've done it a few times (on park) so to do it again in competition mid run would be the best feeling in the world. The new VANS ad is a superman flair and I've pulled that, just stuff that's been messing with my mind. I definitely want to do my own thing and not copy anyone. I want to push it to a whole new level and I'm gonna do it, doesn' t matter what anyone says. All the support from my fans, it's ridiculous I mean BMX Rider of the Year, in the worst year of my life, I can't believe it. I can't wait for next year.

-What your opinion on the state of BMX today and the growth of it?
I think it's the biggest it's ever gotten. A couple of years ago more companies were behind it but now that BMX is nominated for the Olympics in 2008, that's just gonna help it so much more. I mean there are people frowning against it and want to keep it underground, but I mean if the Olympics allows me to get a training facility in my home town I'm all for it, I can't wait. I'm psyched at where it is and I'm gonna just keep riding and doing my own thing and help progress the sport.

-Any more info on competitions your gonna hit back home (in Australia)?
Not really, I'm only doing 3. Beenleigh Jam, then Sydney BMX Games (like the Australian version of X Games) and then to New Zealand for Z Air.

-Are you gonna ride both Dirt and Street next year?
Yes, I think I will. Dirt, Park and for X Games Big Air. I've started wearing a full face, I hate it but they are making us do it. I'm still gonna do it. I would love to concentrate on one event but I also feel like that if I crash or do poorly in one event I can come back in another. Next year, I'm gonna go for it and hopefully not get tired.

More in this category: « Anthony Pill interview Kevin Kiraly interview by Lloyd Ramsay »
back to top