The HARO BMX teams are facing some injuries these days. It sucks to be injured but every rider has to deal with it at some point. It hurts when 5 members of the HARO team are injured at the same time. Jason Richardson is out with a broken femur, Ben Hennon broke his shoulder blade and dislocated his right shoulder, Ryan Nyquist folded his hand underneath his body on a crash and broke it and Ben Shenker and Colin MacKay broke bones while they were in a foreign country. How do they deal with the injury? what do they do to kill time? Are they getting back on the bike before the doctor tells them? Those are a few questions we asked. You're probably curious now aren't you. Before we start we'd like to wish every injured rider on the team a speedy recovery. To everyone else on the HARO team (Rob Darden, Senad Grosic, Derek Betcher, Greg Romero, Daniel Dhers, Chad Roberts) be safe.

Down but not out. 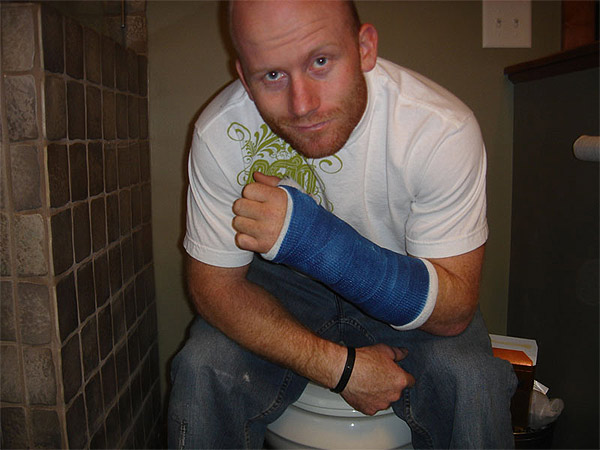 How did you get injured?
Ryan Nyquist:  I broke my hand after I hung up on a 7 foot spine and got ejected over the bars. I was able to get my hand out, palm up and landed on the top of my hand and folded it under my body.
Where were you at the time?
Ryan Nyquist: I was riding at The Unit when this happened.
Did you know something was wrong right away?
Ryan Nyquist:  I really didn't think I had broken it. I though that I had bent it wrong and maybe just needed to chill out for a little while. I could still make a fist and move my fingers all over the place. I had never broken a bone so it was all new to me. I decided to wait to go see a doctor. The next morning I woke up to a little swelling and a lot of tenderness. So I went and got x rayed and sure enough it was broken.
Who helped you on the way to the hospital?
Ryan Nyquist: My girlfriend drove me to the hospital that morning. She's a sweetheart.
How was the treatment there?
Ryan Nyquist: Treatment was fine. I just took a while. I got referred to an orthopedics office a couple days later where I got a cast and instructions on how to care for it.
What hurt most, the injury on not being able to finish the event/trip/session?
Ryan Nyquist: The injury was nowhere near as bad as not being able to ride. There was a Props trip coming through town, the FBM crew was visiting as well, and I wasn't able to compete at the Metro Jam. It was killing my to watch everyone shred The Unit and not be able to participate.
How long are you out for?
Ryan Nyquist:  I hope I'm not out for too long. The doctor told me to come back for another x ray and check up in 3 weeks. I hope its pretty close to fully healed up by then. I already took the cast off after a week because it sucked and started to stink. Plus the cast was so loose it was helping me keep my hand immobilized.
What are your main activities while you are healing up?
Ryan Nyquist: I've been doing a lot of yard work and cleaning in the house. Nothing related to bikes at all. Kind of taking care of a lot of stuff that I just don't get around to when I'm healthy and riding.

Favorite computer games: I don't play video games really. A little PSP on plane rides but not really at home.
Favorite websites: BMXOnline, Haro bikes
Favorite books: The DaVinci Code, Catcher in The Rye, Tuesdays with Morrie
Favorite BMX DVD's: Drop the Hammer, Props, Expendable Youth #1
Favorite music: Hum, Sepultura, RJD2
What does the lady say of you being injured?
Ryan Nyquist: She thinks it sucks because she can tell how bummed out I am. But we've been hanging out a lot because of the injury, so it's not all that bad.
Who have stopped by to say hello?
Ryan Nyquist: Lots of friends. It's nice.
Are you going to push the healing time and get on the bike sooner than the doctor said?
Ryan Nyquist: Probably. I think that I'm a pretty quick healer and am trying to take care of my hand as best I can. Maybe shave a week off the time.
When do you think you'll be back up and ripping?
Ryan Nyquist: Hopefully I'll be up and running after another 3 weeks. Keeping those finger crossed (on the non broken hand that is).
Any thanks: Thanks?... thanks for helping me exercise my hand by typing this. Time for rest. 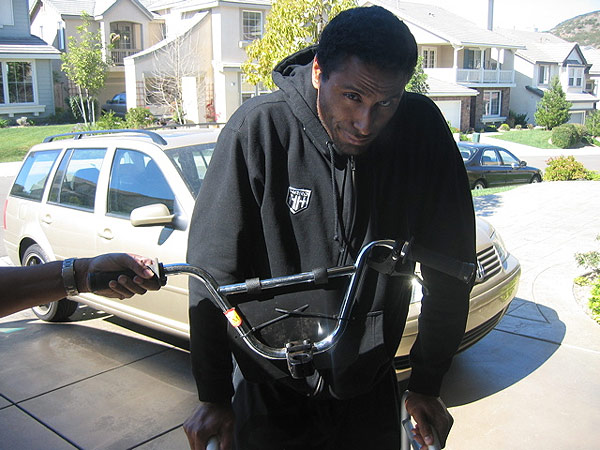 Jason Richardson (HARO BMX race team)
How did you get injured?
J-Rich: I was going through a pro section and landed on someone who cased in front of me. I went over the bars (I guess) and my leg was broken on my handle bars. They were bent with no dirt on them so I am guessing that is how it happened.
Where were you at the time?
J-Rich: Guthrie, Oklahoma

Did you know something was wrong right away?
J-Rich: Not sure, all I remember was landing on dude. Then I came to - but wasn't entirely aware of what was going on.
Who helped you on the way to the hospital?
J-Rich: DB44 all the way and a Helicopter.
How was the treatment there?
J-Rich: Actually I can't complain about the treatment. Everyone was polite and nice. It seems that the surgeon did a good job repairing my leg.
What hurt most, the injury on not being able to finish the event/trip/session?
J-Rich: Are you kidding me? I broke my Femur!
How long are you out for?
J-Rich: Hopefully not too long
What are your main activities while you are healing up?
J-Rich: Answering interview questions, looking into schools and business opportunities, therapy, and trying to manage some of the Haro team stuff.

What does the lady say of you being injured?
J-Rich: She hates it and worries about me getting hurt again.
Who have stopped by to say hello?
J-Rich: In the hospital - DB44, Greg Romero, Stumpy, Purse, Darrin Mitchell, Pete Dylewski, Craig Fuller and kids.
At home - Steve Veltman, PH Sauze, Dr. G, Erik Simmons, Darryl Crews, Stan Horton, and my Parents.
Are you going to push the healing time and get on the bike sooner than the doctor said?
J-Rich: Probably.

When do you think you'll be back up and ripping?
J-Rich: Back and Ripping? Not sure as I never really "ripped" in the first place.
Any thanks: My wife Hale', DB for getting me taken care of at the race, Haro team and Tony D for keeping the faith, Greg Romero- it was a good run!, all those who donated on BMX news, Robbie Miranda for setting all the donation stuff up, The BMX community in general.

How did you get injured?

MacKay: Jumped out of a wall ride to 540

Where were you at the time?

Did you know something was wrong right away?

MacKay:  A little scared, but I thought it was a bad sprain.

Who helped you on the way to the hospital?

MacKay:  I went to the hospital on my own, 2 days after the incident.

How was the treatment there?

MacKay: Just got X-Rays on Monday, then had to line up an operation, I had an appointment for Wednesday,  I had 2 screws put in my ankle. I broke the Tibia.

What hurt most, the injury on not being able to finish the event/trip/session?

MacKay: I hurt it in prelims at Metro, and making the finals and pulling out last minute hurt a lot. I love making finals, it’s the main event!

How long are you out for?

MacKay: Probably a month, then I'll start training it up with rehab, there’s nothing on my schedule for 3 moths, so I’m not in a hurry, but I want to get this cast off!

What are your main activities while you are healing up?

MacKay: For the next few days, TV, and Computer, but then in a week I'll be shooting pics.

Favorite computer games: Don’t have any

Favorite movies: Ones I haven’t heard of that Kelly reads the covers of and they turn out to be awesome.

Favorite BMX DVD's: Marco gave me the latest Props, that was pretty cool.

What does the lady say of you being injured?

MacKay:  She was bummed for me, and I'm usually the house wife around here, as Kel goes to work everyday, so now Kel also has to vacuum, cook, wash up, feed Sully (our dog)  and make the bed. She has a lot on her shoulders.

Who have stopped by to say hello?

MacKay: Rob and Nyquist came over, but Ali W, Josh H, Maclease, Lilly,  Dave M, Jeremy, Allan C all rang yesterday during surgery and I got there messages. The all offered help or a lift. Thanks blokes.

Are you going to push the healing time and get on the bike sooner than the doctor said?

When do you think you'll be back up and ripping?

MacKay: Not sure, see how it goes. Hopefully get out of a cast at 5 weeks, then just start out on a road bike and stuff to get mobile.

Any thanks: Sheryl Yee,  she works for the Canadian Therapeutic college and was at the Metro Jam when I hurt my ankle, she is also communicating by email with me through the healing process.  Also thank Kel for doing everything, absolutely everything.  My neighbor Carl for taking the rubbish out and hanging with Sully our dog. And just my mates for piggy-backing me at metro, and for being there for me.

Being hurt sucks, but we risk it everyday, there’s been a lot I’ve gotten away with that’s for sure, the good times outweighs the bad by huge amounts. I was last hurt real bad in 1997 when I broke my Elbow, so I’ve been going real good for a while now. For all the pleasure, there’s some pain, and I’m taking it right now. I look forward to riding my new “Forum” bike soon.

More in this category: « Steve Woodward interview Down but not out part two. Hennon and Shenker also on the reserve list »
back to top