Kagy won the silver medal with a flip double whip to double tailwhip. After taking his place on the podium the Gilroy, Calif. native was already looking ahead to X Games 13. "That was an amazing competition, and all we had was two days practice," said Kagy. "Hopefully soon we'll have one of these mega-ramps to ride on a regular basis, to make next year's competition ten times as crazy."

Cooke won his bronze after rolling in and sticking a flip x-up to x-up. "Yesterday was my first day on the ramp, and I have more potential than I showed today," said Cooke. "Hopefully ESPN will stick with Big Air and I get invited back next year." 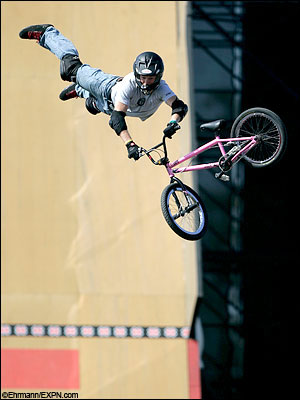 The fourth, and only other, rider - Morgan Wade - landed a 360 to air in the competition.

BMX Freestyle Big Air is an exclusive X Games event and features athletes riding down a giant mega-ramp from a 60- or 80-foot roll-in, choosing to launch over a 50- or 70-foot gap, landing and continuing into a 27 foot quarterpipe.