Written by  Bart de Jong
Read 10077 times
Los Angeles - August 2006 - A double flair may sound simple, but X Games 12 Men's BMX Freestyle Vert Best Trick gold medal-winner Kevin Robinson can assure everybody that its not. Robinson's double flair (a back flip into a cork screw) earned him the X Games gold medal that has eluded him until tonight, when he beat out silver medalist Chad Kagy and bronze medalist Simon Tabron. Fittingly the three-time BMX Freestyle Vert bronze medalist earned gold by landing a trick he's been chasing for years. "This was three years in the making - it's the end of a three-year-long day," said Robinson. "I took off and it felt light the whole way through until I hit bottom." Kagy, who earlier in the evening won gold in the BMX Freestyle Vert, tallied a second X Games 12 medal by landing a double tail whip flat spin. Tabron grabbed his second X Games 12 bronze medal with an Alley Oop No-Hand to Turn Down 540. Earlier in the evening Tabron won bronze in the BMX Freestyle Vert. "I'm happy to get third in the middle of all this mayhem," said Tabron. "The best thing is that everyone came up healthy. History was made tonight, and there were no casualties." 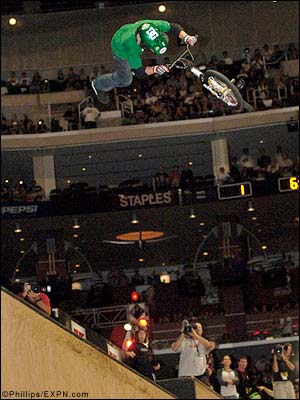 More in this category: « BMX FREESTYLE VERT HAS A NEW CHAMPION FOR FIRST TIME IN NINE YEARS Felt's Scotty Cranmer gets his park gold »
back to top