Written by  Bart de Jong
Read 9114 times
After multiple years on the shady FISE vert ramp, the organization wanted to make sure that the 10th edition had the perfect set up. The 18 meter wide Red Bull ramp showed up and it took a bit to get things perfect on the sloping asphalt. The heat and dust didn't make the set up perfect but it was a big improvement anyway. Tim Eichert and Eduardo Terreros were flown in from the LG contest in Amsterdam to participate at the FISE. Too bad Tim's bike never showed up (they flew into Barcelona too) and Eduardo's bag with his pads and helmet never showed up. Tim's solution came in the form of Achim Kujawski's bike that he had brought along but wasn't going to compete. All of a sudden Tim had a perfectly dialed bike and he seemed to enjoy it. Eduardo had to collect some stinky pads from other people and to top it off he rode with Tim's sweaty helmet.

There was little to no room for practice for both of them as they arrived on the spot at 1pm and the contest was scheduled for 1:30pm. The comp was moved back to 3pm so both of them had a bit of time to get used to their new equipment. With 30+ temperatures it didn't take long for the riders to warm up.

Max Vincent and John Heaton had just arrived at the ramp as well and Nicolas decided to join the vert posse. With Peter Geys, Toby Gresswell, Mark Theaker, Nicolas, Jan Valenta and Jean-Marie Baertsch on the ramp, the comp got on its way. 36 years old Mark Theaker defeated lip trick kings Max, Nicolas and John to finish 7th. Buddy Toby had the height and finished 6th behind the flown in duo of Eduardo Terreros and Tim Eichert who both ended up on fourth place. Edu had actually done some good runs until he crashed on a simple barspin air and knocked himself out in Tim's helmet. We hate it when that happens. Tim rode well on Achim's bike and pulled his one-handed 540, flair and tailwhip for a bit of prize money. 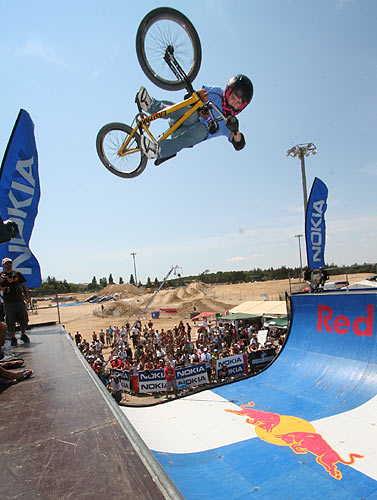 Peter Geys from Belgium rode well after being injured for a long time. he got the pump and also a big bag of variations. He pulled a 540 (first one after getting hurt on one) and did his x-ups, no-footers, inverts in the 6-7 feet range. Jean-Marie Baertsch made the trip from Switzerland by train and made it count. 2nd place for the stylish rider. First went to Jan Valenta from Czech Republic. He simply put the best runs together in the jam session style contest. After his first run with a no-hander, flair and a tailwhip, it was catching up for the others but they never did. Congrats on the win Jan and you'll pull that no-handed flair at the next contest, they were super close. 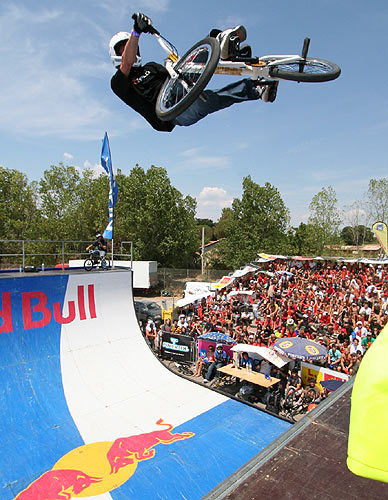 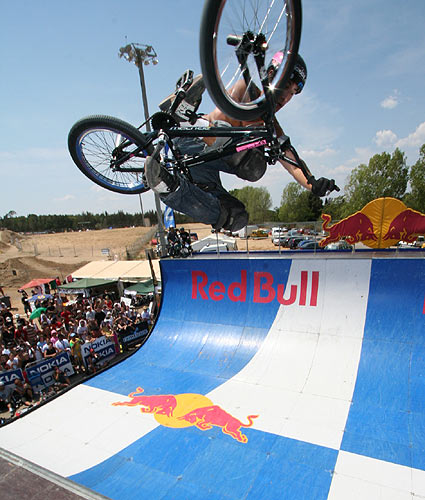 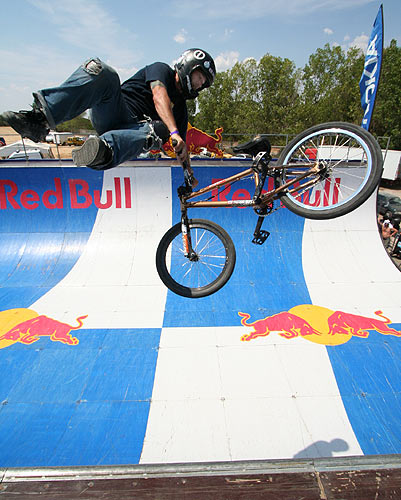 More in this category: « King of the Wall 2006. Switzerland. By Nonda Pro Dirt NokiaFISE »
back to top