"I only have one pair of girl's pants." As soon as I heard that, I knew my trip had begun. The Weight Nazi said it, and he was probably telling the truth. To me, it was like saying "I only have one dress, and I hardly ever wear it." I laughed hard and continued to pack. Mr. Lube, The Weight Nazi, and me -your reporter- Dave G had decided to attend the Baco-A-Go-Go contest this year. It was at Chad Degroot's new park, Mesh, in Orlando, Florida. We jumped on the expressway and hit the warp drive. In what seemed like 45 minutes (it was really about 7 hours) we arrived at the hotel room that Mr. Lube had been generous enough to provide. After a few hours of nappy time, we drove to the park and proceeded to shred to the best of our abilities. Chad's new park seems a little smaller than his old one (At least the bike side does. The park is has a skate side and a bike side.), but there are some much bigger lines thanks to the high ceiling. 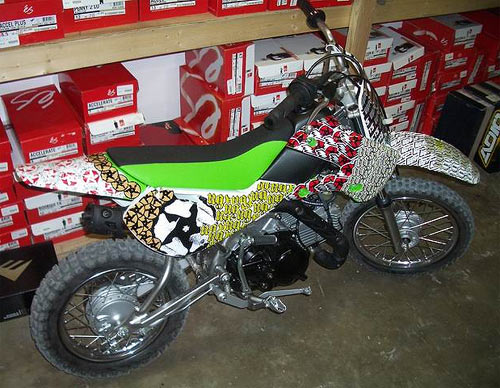 We enjoyed a low-traffic session and returned to the room for more beauty rest. Tomorrow was the first real contest day, and there was sure to be much ripping, beer drinking and Halloween weekend corniness. 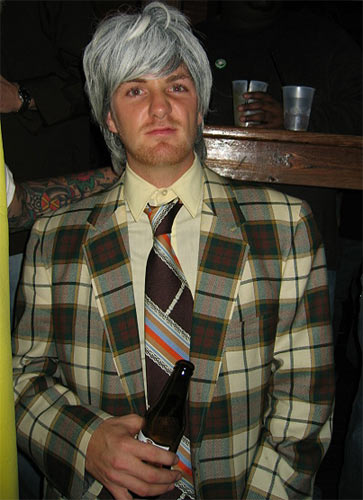 Pulling into the parking lot on Friday, we were greeted by some of the first long haul attendees. Everyone was getting out of cars and paroozing the facility. Another low traffic session was had, but it would be the last one of the weekend. By Friday night, the contest was in full swing and the party had started. From what I can tell by my one experience and what I've heard over the years, Baco is one part stunt jam, and three parts party. This year was no different. Sometime Friday night, Team Penske As far as I know, Team Penske is a group or riders and lunatics that own a box van that was once owned by the Penske showed up and then things really started getting wild. 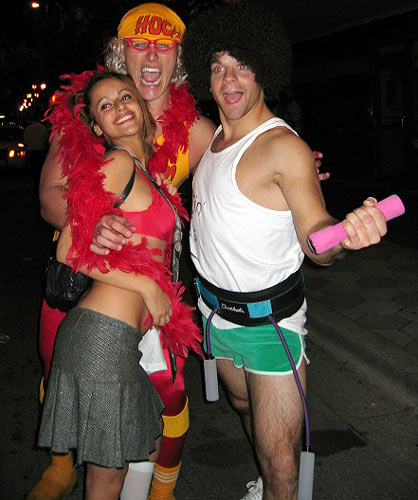 Corporation. They show up at random stunt events and cause scary things to happen. At one point during the evening, Matt Coplan's band set up their PA in the park and played a show. A regular teenybopper night was in full effect with many young, scantily clad females, and lots of sweaty, ratty bike dudes wandering around and taking in the scene. Everything was going great until Team Penske's poor firework handling skills got the cops called. I swear it's not that hard to enjoy the god-given delights that fireworks provide, but you've got to know how to handle them. You don't just throw a mortar into the middle of a crowded parking lot! I guess you forget about some of the safety precautions when you're super drunk. I know it's happened to me before. I need to take this time to apologize for my lack of pictures with this story. I really wanted to get a good one of Chad Degroot, and Kevin Porter 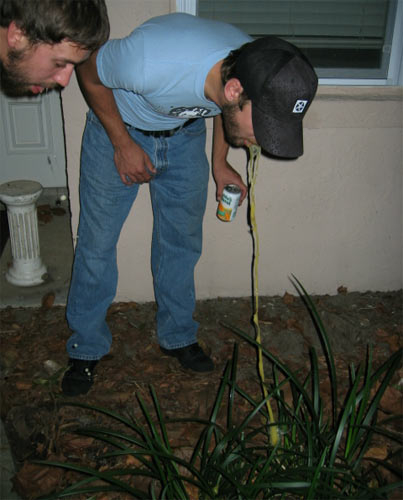 dressed up as ketchup and mustard bottles. In fact, there were tons of pictures that I wish I had gotten. Morgan Wade was dressed as a pimp (I think) and Gary Young was some sort of pirate. One guy was a pack of Newports, and another rode in the contest dressed as Brittany Spears (The catholic School Girl outfit). He later did a big gap in the skirt only. My photographer for this weekend was attacked by baby alligators as he was trying to take pictures of Micah skinny dipping. My backup photographer was incapacitated as well. A victim of a lost battery charger. I guess I need more backup photographers. 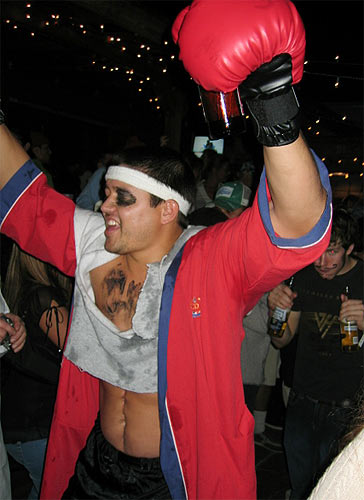 Saturday was pro. Team Penske showed up early. They had a celebratory fake snowstorm in and around their truck. The prelims were run team style, which worked out nicely. Each team of three or four riders got about five minutes to shred the course. The result was an action packed five minutes instead of 15 minutes of starting and stopping. On the way back to the truck after prelims, The Weight Nazi and I witnessed one of the more impressive displays of public drunkenness I've ever seen. Two members of Team Penske were floating back to the rig in quite an erratic pattern, loudly proclaiming their opinions to all who would listen (or were in a fifty foot 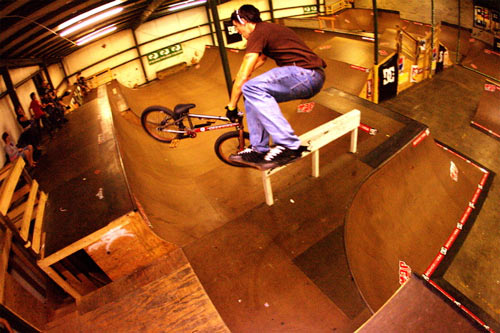 radius). Those two gentlemen firmly believe that "Team Penske rules" and there was literally no way for them to say it clearer than that. So they repeated it several times, usually when someone was starring at them in awe. Back at our truck there was a clear view of the Penske rig and a young man was standing on top doing some sort of strange jazzercise moves or something. Then he began jumping as high as he could and landing on his back on the top of the rig. It was a darn funny thing to watch. Then he screamed something and jumped the off the top spinning a quick 180 and landing on his back in a clump of shrubbery. 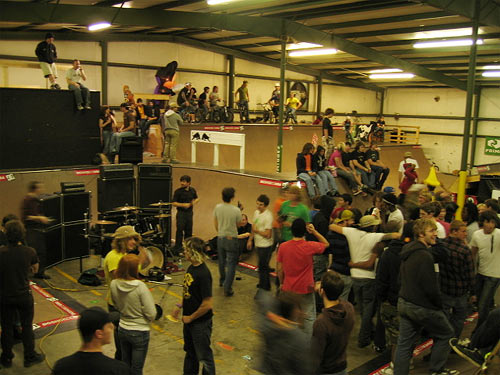 Team Penske roared and was set into a frenzy of drunken buffoonery that I can't really describe here. Of course a police officer was nice enough to show up soon afterwards. She boldly ran over an orange safety cone on the way in and got out of the cruiser laughing. I liked her style. Team Penske's rhythm was quickly thrown off so they scattered into the crowd. It was now safe to run the finals, so the cute blond policewoman departed. She said hey to me on the way out. Is it just me or are cute female cops exiting in some weird way?

Ok back to the pro finals. I'm a drunk. I watched most of the pro finals while drinking Yuengling and grinning like an idiot so, I don't remember most of what happened. If you want to know the details I'm sure there will be plenty of video coverage since there were about 14,063 digicams documenting everything. I will say that Daniel Dhers from Venezuela (I think) was a super-badass. You'll be hearing 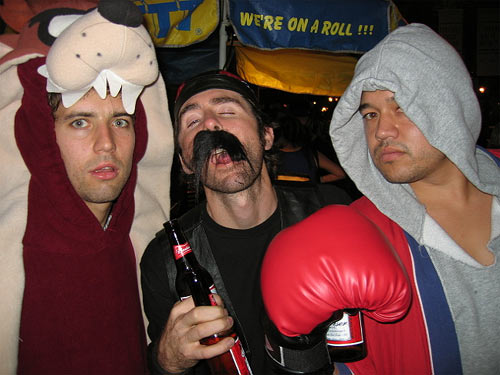 about this guy. He won pro and ruled the park all weekend with huge radness. After the finals I walked back to the truck to get another beer, and the cooler was gone. Instantly I knew that Team Penske had snatched it. The Weight Nazi came over and I told him about the cooler. Then Mr. Lube heard about it. I decided we should cruise over to the rig and see what we could see. Turning the corner we saw three guys drinking Yuenglings, one sitting on my cooler. I asked "Is that good beer?" as genuinely as I could. They 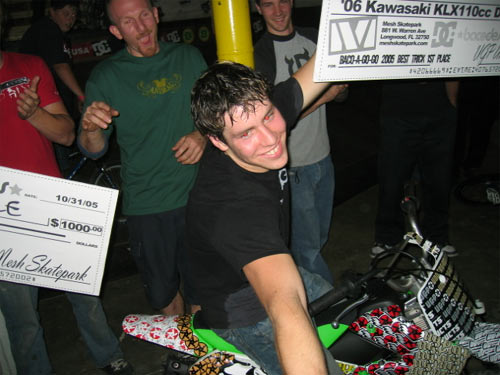 were really friendly, acting like everything was fine. There was almost a little rumble as Mr. Lube grabbed the cooler handle and jerked it out from under whoever was sitting on it. Me and The Weight Nazi tried to ease the situation. All we wanted was to get the cooler back, which we did after few tight moments. Back at our truck 4th grade was trying to smooth things over with little success as the cops showed up yet again.

That's about all I remember about my Baco-A Go-Go 2005 trip. On the way home I got stopped and hassled by some hick cop on the highway. I was going 83 in a 60 and they got me. 422 bucks down the drain. They made me blow a breathalyzer and I blew a 0.0. I was as shocked as the cop was. He seemed sure he'd caught a drunk driver. I wanted to tell him that a Baco jam will do that to you, but I knew he wouldn't understand.

More in this category: « November 2005: Results from the KOG in Japan. By Yasuyuki Takeo Loading; by Dwayne Verkade and friends. By Millocal »
back to top