What is it that you do these days?
Glenn: I make videos and films. I still work for Transworld, my job is to produce one BMX video and one quad off-road film, there's a lot of extra stuff in there, like the presentation at the nora cup awards, company presentation stuff, and web videos.

You had a change of jobs when you worked for Primo for a while, how was that? 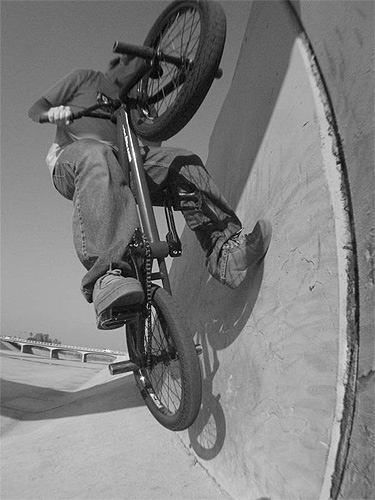 Glenn: I still have mixed feeelings. It was a great opportunity but I saw a side of bmx I hope most kids who ride never see. Business makes friends into scumbags, and even though it's like that everywhere, it's harder to swallow when it's based around something you love. I did learn a lot and in the end realized how much I love making videos, and I was lucky enough to go back.

Is making videos what you really want to do?
Glenn:  Yeah, there was a distinct moment in my life where I could have rode more and had more fun riding or stood behind the camera more, I chose the camera, but in a way it's the same sort of thing. The feeling I get pulling a trick or learning something new, that sense of accomplishment is much the same when I learn something new on a computer or film a trick in a way I'm proud of. Sometimes making a video feels alot like riding to me.

Does that include music videos, commercials and other stuff like that?
Glenn: Yes especially now, or these days...The thing is, and I hope I don't sound like a dick, but I probably will, I've made a lot of videos. There was a lot of things I did before a lot of people, different editing styles, different music, different angles...after doing a video I don't want to make that same video again, I want to make a new video, something different to least. I've always tried to change it up after each video, I've done it so much there isn't as much challenge in it as there once was, and I'm not saying I'm so good, cause that's not the point. I'm not trying to be the best, I'm just trying to do the best that I can do at the time. That's why the next few projects I'm working on will be distinctly different than the rest.
Outside that I do want to make some music videos, I'm working on a few low budget ones now, and especially commericals, someday I hope to shoot a feature as well. So yeah the plan is to do that stuff. 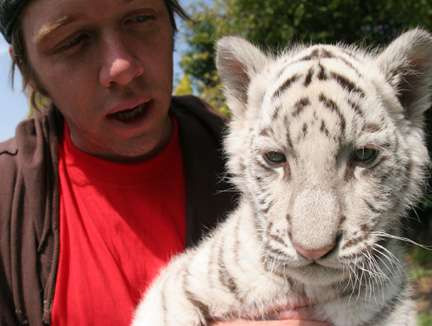 You were just in South Africa for a couple of weeks. Do you like the travel?
Glenn: South Africa was amazing because it's a completly different place and all new to me. So traveling there was awsome. However sitting on a plane for 10 hours, sitting through a 7 hour layover, then sitting on another 10 hour flight I could do without.
Seeing the different places and the world is awsome, if you have any chance to see other places, you should, you won't regret it.

Being from the Big Apple, you moved to California. Do you enjoy it there?
Glenn:  No...it's a good place to be for what I do, and I have some good friends here, but NYC is the best, end of story. I'd be lying if I said anything else.

What do you like more, every day sunshine or living in the BMX industry area (SoCal)?
Glenn: I'm not sure how to answer that...I get real happy when it rains, and I hate the industry. I love talking shit, and I get a kick outta all the industry drama, but the way friends fuck each other over, for a couple of measly dollars makes me sick. I mean if they were fucking big pimpin' and making big money, fine fuck people over, go on with your bad self...but scumbagging for friends or anyone for 10 frame sales...get the fuck outta here...

How much do you get to ride these days?
Glenn: I rode today, but that was the first time in three weeks, but normally I ride a few times a week, at a very chill level though.

What bike do you have?
Glenn: VOLUME Jason Enns DEATH WISH, with Animal parts...

Best tapes to shoot with?
Glenn: I use DVcam tapes, they cost a bit more but they use a heavier metal flake which prevent drop out.

Do you like setting up extra lights to create good footy at a spot that would be too dark to ride at during the night?
Glenn:  Yeah man, with riding it's hard cause when you ride with your friends, you ride in the dark, but dark footage on a vid sucks, I hate camera lights too... I use it all the time cause it's quick easy and the only option available sometimes, but nothing can beat a well lit night shot. If I could I'd have every night shot lit with the generator and lights I would...but you can't carry a generator on a plane.

Do you adjust your editing to the needs of the company that hired you?
Glenn: Yes and no...I mean there are some unwritten ruless. I have to secure the music rights, that dictates a lot of the editing and feel. I also can't get to rated R with cursing, middle fingers, and what not...I mean RIDE is owned by a bigger company, so there are rules.The challenege is to be able to work within those rules.
Now as I'm doing the Volume video there is obviously a lot more freedom in some ways, but Brian (Castillo) has a pretty distinct view on how he wants things, So there are changes I have to make. It is his company.

How do you get around using good music?
Glenn: Pray the riding is so good no one will notice?

Who do you admire in video land?
Glenn: Mark Eaton, Bob Scerbo, and Chris Rye

Mark Eaton's video are what inspired me to start making videos

Chris Rye's early videos made me want to make my video have something other then just being a video, I think the word I'm looking for is style...Plus I have so much respect for the sheer numbers of video he's done...If I did that many, I'd have died

Bob Scerbo, I'm not even sure if I like the way Bob films or edits but he does exactly what he wants and he don't give a shit that I just wrote I don't like his filming or editing, and that is awsome...

What are you working on right now?
Glenn:  -A Skavenger HOW TO ride street video called  STREET 101
starring Vinnie Sammon , edwin Delarosa and Corey Martinez

-THE VOLUME VIDEO: ON THE CLOCK 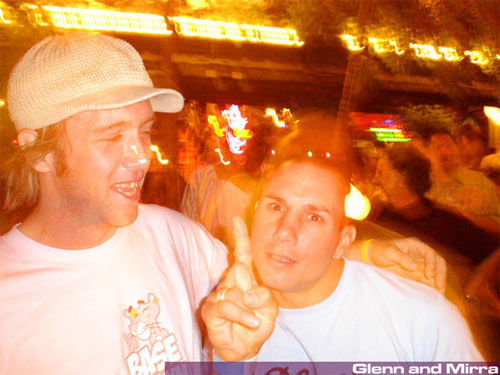 -FLIPSIDE, where BLACKMAN, Nigel Sylvestor, EMAN, and this kid Ralphy are taking a ride with me to Dave Mirra's house where we are all gonna chill and ride with Dave, Josh Harrington, and Rob Darden. Then a few weeks later, Dave, Josh and Rob are going to go ride street and hang with those dudes in NYC...

More in this category: « INTERBIKE OPENS ATTENDEE AND EXHIBITOR REGISTRATION FOR 2006 EXPO Greasy Comb is looking for an Inside Sales/Customer Service Rep. »
back to top