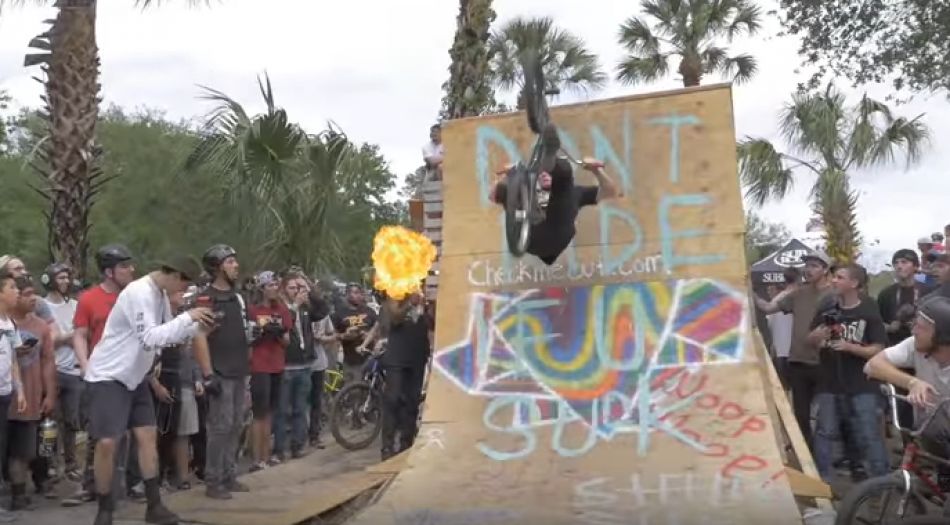 WE SURVIVED THE CRAZIEST BMX EVENT! by Scotty Cranmer

We survived the wildest BMX event ever! Our last day in Florida was spent at a backwoods location off of a dirt road where over a thousand BMX enthusiast showed up to have an amazing day partying and riding bikes!

My good friend Trey Jones masterminded this event and he did not disappoint! We started out the day at 10 AM with big boy and Dom taking on one of the scariest ramps at the venue, the 10ft tall open loop! I was terrified for them but they were determined to get the back flip transfer done. After a few crashes each they both landed the loop and the crowd went crazy! Next the crew got next to the ramps for the jam session. Big boy started off the session trying a flair challenge and as the rest of the riders started to turn up the heat so did he! He tried a fake he from flip on a 10 foot of vert wall and crashed pretty hard but he got back up and tried it again and again and nearly burned his eyebrows off as someone sprayed fire him but he did land it at the very last second of the jam session! Next event was the 72 foot grind rail over alligator infested water! I did not think it was possible and a bunch of riders took on the challenge but Noah was the only person to make it. Then big boy found a ramp that jumped into the water so he couldn't help himself but go higher than anybody else and do a crazy front flip bail straight into the deep part of the lake! It was insane! After that we watched the dirt jump session go down as guys were doing backflips, 360's, tail whips, and having the best time doing them! It was so inspiring to meet so many amazing people we all had the time of our lives I hope there is a another one next year!

More in this category: « Dante Distribution presents Pim Scheers Kerley and Fernengel at the Vans BMX Street Invitational 2017 by Haro Bikes »
back to top