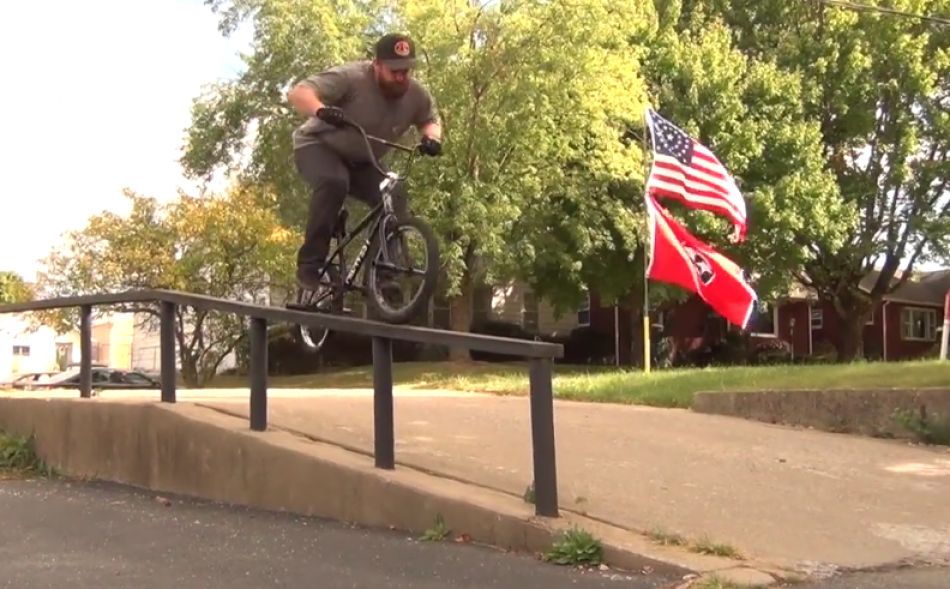 Cody Thomas: hood antics TM from Rob DiQuattro.
I'll never forget the day I met Cody. I was 18 and had just moved to Columbus for school. I was out pedaling alone looking for spots and other kids on bikes. I found a group and awkwardly forced myself into riding with them. Then Cody rolled up. He came right up to me, asked if I was new, demanded my number, told me he'd be picking me up to ride the flow on the reg, and then made fun of me for being too street, style daddy, and salty cleveland mane. He took me in as a brother without a second thought.

I wouldn't be who I am today without Cody. He taught me that it's ok to show your friends love. He taught me that I had no fucking idea what intelligence was. He taught me I didn't have to go it alone, and time spent in the company of friends is never a waste, regardless of the activity. Also, footjams.

This edit is a testament to his love for bmx and his friends. He rides hard as fuck because BMX deserves it and that's it. Watching it come together over the last year has been mind-altering. Everyone talks about putting everything they've got into one cohesive project, but few ever do. He did it in between working 3-4 jobs, without a filmer, and without a steady crew of riders. Not to mention, he almost lost his arm to shingles and his appendix self detonated. Kid, one of Cody's closest filming resources (2 hours away) shot the thumbnail on a pretty average day for Cody. He worked his ass off all night, slept a wink, woke up and moved an entire house, all before sneaking a gap-to-rail into his day. Through all this, Cody still found the time to print a run of Yogi T-Shirts for the crew, because that's Cody. We've all called him the TM since the beginning of antics. He's trying to buy some scary van off craigslist and take his boys everywhere all in the name of a good time. He willed this entire piece into existence and monster trucked over all excuses in the process.

Cody is the embodiment of everything I love and hold dear about bmx. Cody, you are my brother, and I love you.

More in this category: « A weekend in Vegas by 5050bmx Estonia Trip from FAKT BMX »
back to top