Bohan becomes first to win back-to-back golds in BMX Freestyle Dirt LOS ANGELES - Worst to first. It's certainly not the way any competitor wants to make their living. But sometimes you have to play the cards you are dealt. So Corey Bohan was sitting dead last after two of three runs in Saturday's BMX Freestyle Dirt final at X Games 11. The he flopped Royal Flush on his final run to become the first-ever to win back-to-back gold medals in the competition.
Read more
News 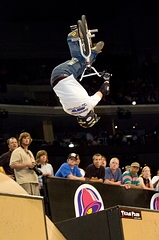 Jamie Bestwick Doubles gold total with BMX Vert Best Trick victory LOS ANGELES - It's hard to believe a BMX Vert Best Trick competition had not been held at the X Games prior to Saturday night. After what went down at STAPLES Center, it's safe to say it will be a part of X Games for years to come. Every run was bigger and better than the previous one and it seemed like a year's worth of progression was squeezed into the 30-minute jam session. And when all was said and done, it was Jamie Bestwick (State College, Pa.) that walked away with the gold medal after sticking the first-ever Flair Double Tailwhip. It was his second gold medal in three nights - he won BMX Freestyle Vert Thursday.
Read more
Freestyle 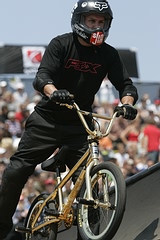 Mirra Returns With A Vengeance; Shakes of opening-night slam for Gold in Park LOS ANGELES - If there were any after effects from Dave Mirra's opening-night slam at X Games 11, they weren't evident in Saturday afternoon's BMX Freestyle Park finals. The Miracle Boy has only left the X Games without a gold medal around his neck twice in his previous 10 appearances. Make that twice in 11 appearances after he delivered a knockout punch to his competition on his first run with a score of 89.33 that was highlighted by a Backflip Tailwhip over the spine and a Double Tailwhip and claimed his 14th career gold - 19th medal overall. 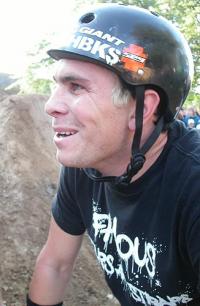 Dave Mirra Among Qualified Tour Athletes Competing for Coveted Dew Cup NEW YORK â€“ July 19, 2005 â€“ The Dew Action Sports Tour, the first-ever, season-long professional multi-sport tour in action sports, announced the athletes who qualified for the remaining three Tour stops. The 2005 Dew Action Sports Tour features competitions in the six disciplines of Skateboard Park and Vert; BMX Dirt, Park and Vert; and Freestyle Motocross. Depending on the discipline, 18 to 27 athletes have qualified to compete at the VansÂ® Invitational, Toyota Challenge and PlayStationÂ® Pro. These athletes qualified because their cumulative points from the Tour’s first two stops were high enough to make the cut. Two or three wild card spots, per discipline, will be announced at a later date. The first two Tour stops, the Panasonic Open and Right Guard Open, included open qualifying competitions which allowed new talent to enter the contest with the possibility of competing for the rest of the season. The fields are now firmly established, with several open qualifiers making the cut.
Read more
News 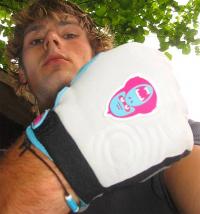 The King Kong BMX team has grown with 4 riders after picking up 2 new distributors. In England Scoop distribution is now the company you need to contact for King Kong gloves and protection gear. Team riders in the UK are HARO Europe's Anthony Pill and Country Bikes' Craig Stevens. In The Netherlands Mark Vos (pictured) and Barry Kohne are the two new team guys through Soulcycle. To get in touch with the Head King Kong you have to call Poland. That's where Marcin Stypulkowski has set up his camp. Tel: +48-22-617 63 93
Read more
News 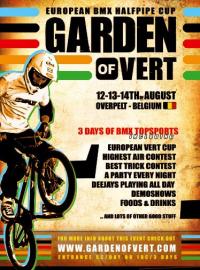 Vert riders have taken things in their own hands. When the Spin Like Hell company came out with the "Vert is dead" T-shirts, it got people thinking. Achim Kujawski started off the vert support with his indoor Verthaus session earlier this year. This upcoming weekend (12-14 August), you can go to Belgium for more. Peter Geys built a monster of a vert ramp in his backyard 2 years ago. The ramp will be the center of attention from Friday till Sunday for some great riding sessions. If you know Peter, you should know that the evening program is taken care of as well. There are not too many (vert) events taking place in Belgium these days. The Garden Of Vert is a chance to see some great riding from some of the top European halfpipe riders. The Bike Devil himself recently pulled his first 900 air in England and might pull his first one on his own ramp in Overpelt. For directions, sponsors, the program and more info of the event, surf to: www.gardenofvert.com
Read more
News 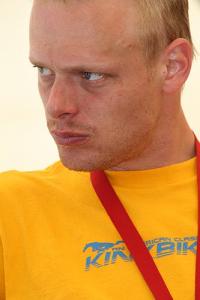 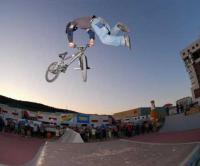 Christoph Huber picked up some new blood for the Mankind Team. - New on the team is Juan Ruiz from Spain who wears a black helmet like Darth Vader , and who placed 4th in Pro Mini at the BMX Masters in Cologne. Juan was seen shredding at the FISE Contest in Montpellier and at the LG Contest in Barcelona this summer. The photo of Juan is from a contest in Spain which happened a few weeks ago. - Also new on the Mankind team is Andrew "Gee" Gregory from Australia. Gee just got the cover of Australia's BMX Press Magazine.
Read more
Freestyle 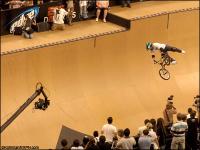 Gold did not pay off.. Another year for the X Games here in Los Angeles...as I head out on the busy freeways of Southern California to see the Finals of BMX Vert....which was promising, considering Mirra needed to make up for last year. This is something he had in mind when you could spot Mirra from a mile away with his 24K Gold Plated bike!!! For the old skool buffs out there, they might recall Woody's 24k gold Trickstar from back in the day, but this was Mirra's way of saying that he wanted it bad...
Read more
Freestyle

August 2005: Bestwick wins vert at the X-Games in Los Angeles. 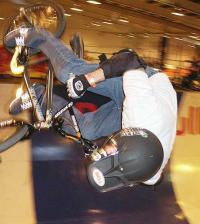 LOS ANGELES - Just call it the Camp Woodward sweep... Because in Thursday night's X Games 11 BMX Freestyle Vert final the trio of Jamie Bestwick, Chad Kagy and Kevin Robinson showed that there is more to a sleepy town in State College, Pa. than its college football team. Bestwick earned his third gold in Vert - he and Dave Mirra have swept the past nine Vert finals - and Kagy and Robinson, his training partners from the Woodward Camp, finished second and third, respectively. The long-awaited showdown between Mirra, BMX's Miracle Man, and Bestwick never materialized, however, as a Mirra crash during run No. 1 forced him and his gold-plated bike to withdraw from the competition and put off the quest for his 19th X Games medal to another day.
Read more
Page 5570 of 5640