When Lance Armstrong's wristbands came on the market I didn't expect much of it. Before I knew it though, I saw loads of people wear those yellow bracelets. It didn't take long before the copycats thought they could cash in on this. We've seen pretty much any colour of the rainbow by now. Enter Mat Hoffman. When he was asked to make some art for a wristband, he had some doubts too. But the Condor was also asked to pick two good causes
Read more
Comic 'n Art 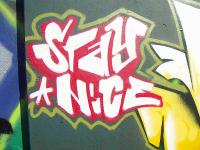 "Graffiti art is constantly changing. Fresh coats of paint and newly pasted posters appear overnight in cities across the world. New artists, new ideas and new tactics displace faded images in a perpetual process of renewal and metamorphosis. From Stockholm to Tokyo, Barcelona to Los Angeles, Melbourne to Milan, wall spaces are a breeding ground for graphic and typographic forms as artists unleash their daily creations." by Tristan Manco
Read more
Freestyle

LG Action Sports Tour Finals Manchester U.K. This was the end of the LG Action Sports Tour in Europe, it was the first one and it started a bit sketchy but it ended with a Bang. Handing out US$ 200.000 for 2 classes (Vert and Park) is not what we call "Normal" but it happened in the MENA building in Manchester U.K. The streetcourse was way better than we had seen on the other stops of the tour (with many problems like: space, time and even customs) and the ASA guys showed that they learned a lot in Europe this year. The Vert ramp was a huge Kingsize one and it took some time before riders were used to the big transition and lack of Vert.
Read more
Comic 'n Art

October 2005: Graffiti art from the Berenkuil in Eindhoven.

Eindhoven has a legal sport for graffiti artists or whoever wants to express their feelings with a spraycan. Some of it is good, some is rubbish, but everybody needs to start somewhere. It's better to do it at a legal spot. The tFAT piece you see here is not made by the FATBMX crew. We stopped doing this in 1985 when we made our first "piece" and got caught (and spent the next day cleaning the wall). Enjoy part one of the Berenkuil art. Part two follows later and can also be found in the Comic 'n Art section on FATBMX. BdJ
Read more
Freestyle 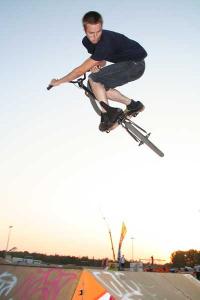 The 2006 Premium team has been announced with pride. Things have been really good working with the Premium guys on new products and the crew looks forward to putting out even better stuff in the future. Everyone that was on the team in 2005 stays on for 2006. Joining us from Las Vegas, NV is Jake Farley (18), he's already friends with most of the crew and is a perfect fit to the team. Also, from Oregon is Vince Kroff (17), Joe , Ryan, Ben and Matt are all living in Oregon now and have been riding with Vince daily. They all wanted him on the team so he's definitely a welcomed addition.
2006 Premium Team (USA):
Josh Harrington
Joe Riley
Ryan Mills
Matt Colisch
Ben Hucke
Vince Kroff
Jake Farley
Read more
Scene Reports

Getting trails in Helmond has been in the works for a long time. Meetings were had at the council and solutions needed to be found. A location was the first problem. After a spot at the fenced off motocross track did not work out, I gave up hope. But not Mike van de Kerkhof. He went on and finally checked out a spot at the Johannes-Vermeerlaan in Helmond-Noord.
Read more
Racing 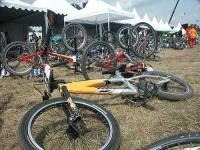 Gilbert, Arizona- October, 2005: The American Bicycle Association, the World’s largest BMX sanctioning body, has created an all new Factory Team program for 2006. In an effort to improve the existing program the ABA met with Factory Team representatives during the Blackjack Nationals as well as communicated extensively with several members of the BMX industry. The results are a revamped program which will create a much more competitive and exciting format that will benefit everyone involved. The following are the key enhancements:
Read more
Pin*up

When men show up in a Speedo, we look in a different direction. When a good looking blond girl rides by on a BMX bike in a Speedo '76 swimsuit, that's a different story. Martin from Brussels found this one and shares it with all of the FATBMX visitors.
Read more
Bizznizz 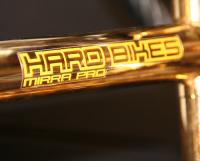 October, 2005-Vista, CA- Haro’s Joe Hawk has been appointed by the Board of Directors as Chief Operating Officer to take the reins of the 27-year-old company and lead it into the next chapter of its existence. Hawk, who has most recently served as Haro’s Vice President of Sales for the past twelve years, plans to not only build upon the success from past, but to also work on â€œfine-tuningâ€? the organization. â€œThe folks at Haro are extremely talented and nothing needs to be reinvented,â€? says Hawk. â€œInstead, some fine tuning will take place and with the exception of a few key enhancements, the same great people that brought success to the company in the past are the same ones that will continue to bring them in the future. My job is made much easier with the resources available to meâ€?.
Read more
News 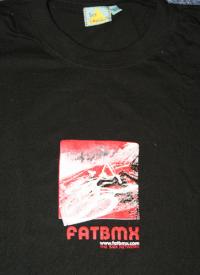 At FATBMX we do some things backwards. Instead of promoting the hell out of our new t-shirts and sell them online before they are even printed, we get rid of them first and then put the new design on the website. Deamer designed the new T-shirt and like I said, there are only a few left. You can contact Paul at Paul's Boutique to see what sizes are not sold out. The colour of the shirt will be black. That's the only colour that Coach will wear. That bike in the picture is actually Pete Fastinetto's wethepeople. The pic was taken at "Pete's Ditch" and Deamer got to work with it.