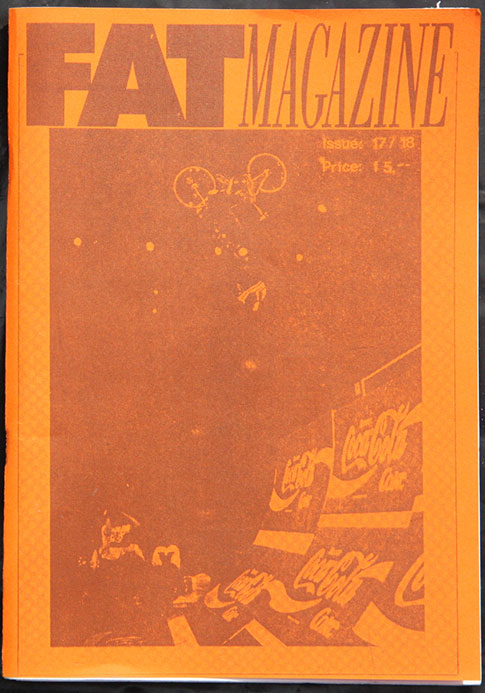 With 92 pages we were allowed to call this a double issue. Most 'zines at that time did not have more than 48 pages and FAT was establishing a name for itself in the underground BMX media world.

Mat Hoffman made the cover and rightfully so. He had just performed a trick in Bercy that noone had seen before. A backflip on a quarterpipe! And not a low one either. Way out of the top of the Coca Cola quarter pipes. Sick!

We're getting more American stuff in the 'zine so from now on the FAT issues should become more interesting for our American visitors.

Vic Murphy wrote a story about the 2-HIp comp at Trend. Mark and Chris Noble sent some Cali stuff from their trip and we also had an interview with 2 Hip announcer Kevin Martin.

The other interviews in the double issue are with Klaus Dyba, Thomas Fritscher and Patrick van Wolferen. We sat on our asses too long and had collected lots of material for this one. 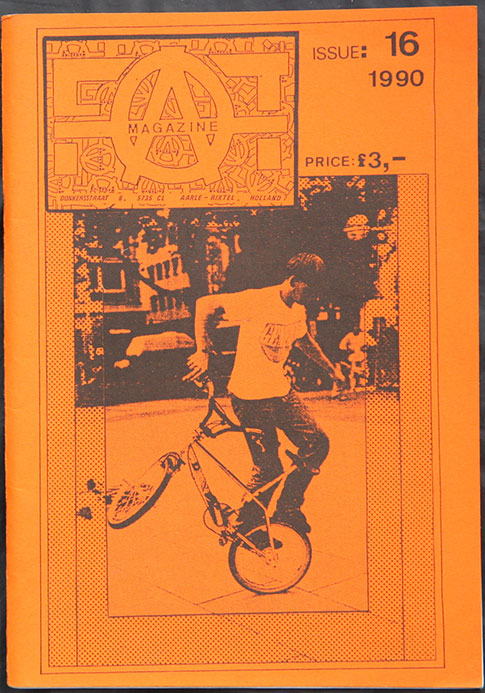 Cover boy Ralf Maier is designing skateparks for a living now. I did a lot of trips with Ralf, some of them are covered in the issues of FAT-'zine. Ralf got an interview in issue 16 and so did Vic Murphy, Mike Golden, Sander Cornelissen and Gerrit Koornwinder.

Back in 1990 you sent a letter to the other side of the world with the questions you had. You were hoping in a few weeks you would see a reply. Vic came through with the answers and I typed them out. He even put some pics in the envelop so I xeroxed them and then sent the pics back to him. Gotta love the e-mail of present time.

Matt Pingel contributed a lot of pages and went sandboarding. We had reports on a skate comp in Valkenswaard, a freestyle contest in Leiden, the Wath Jam, Spanjer's skate comp in Hengelo, and a concert report about the Digital Underground.

The free sticker came from Invert magazine (UK, now RIDE). We checked "The U" which was a crazy dirt spot where you rolled down a huge hill and did a fly-out at the end. We reviewed the following 'zines in issue #16: UHS, RIDE -'zine, RADAzine, Albert 'zine and Mental Chaos. Remember those?

Pages 51-63 show a review of places we visited in 1989. Looks like we were nomads back then already. 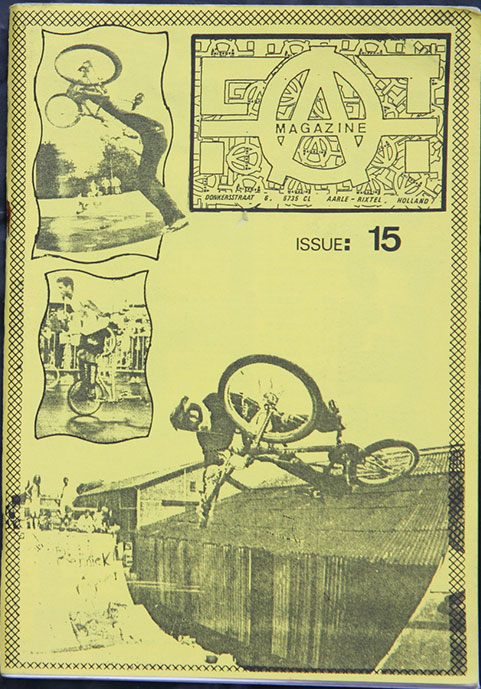 Man, most of these things aren't too hot any longer but back in 1989 they made it on the RAD list. To see what made it on the Lame side, turn to page 17.

We have a Jason Ellis interview in issue 15,  a street sk8 comp in Eindhoven, 540 sequence of Albert Moonen, the Circus came to town and brought 2 BMX-ers from England, The Cologne contest Number 2 took place at the Jugendpark, Merijn Bonte got an interview, Free Converse sticker, Divorze Posse live, we had an article about miniramps that were the new thing at the end of the eighties, Matt Pingel had his fair share of contributions in the issue and Martijn Deijkers wrote a scene report on Adelberg, Germany. Andreas Althaus got an interview as well, we had a report on the King Of Concrete, concert report on the Bad Brains and  a wrtie up on a demo in Uden. 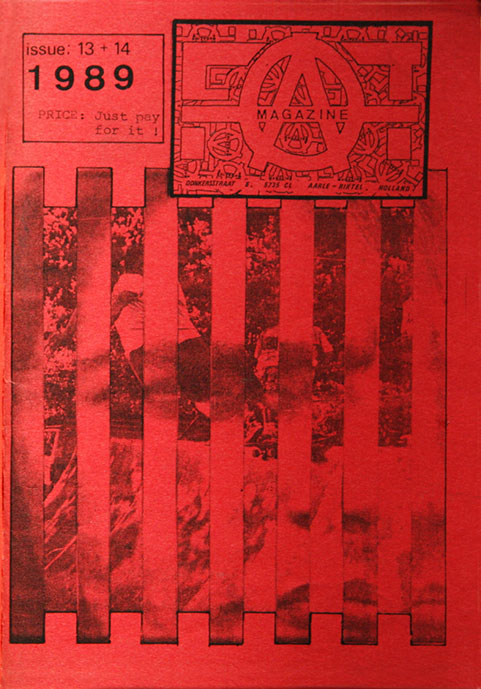 The first double issue of FAT-'zine. With 88 pages it was also twice the size of most 'zines back in the day. Issue 13+14 featured over 150 photos. The quality was terrible but at least it brought the message across.

The typewriter was still doing its job but the ink ribbon was fading. I loved freshly new ink ribbons as it also had a white line up top that you could use to correct the typos. But more than once the machine got stuck behind a photo and the letter didn't line up correctly and you had to bring out the Tipp-Ex to change things. It was horrible compared to the computers we use today.

Sean Coons did a comic and we already had stuff lined up for the next issue. 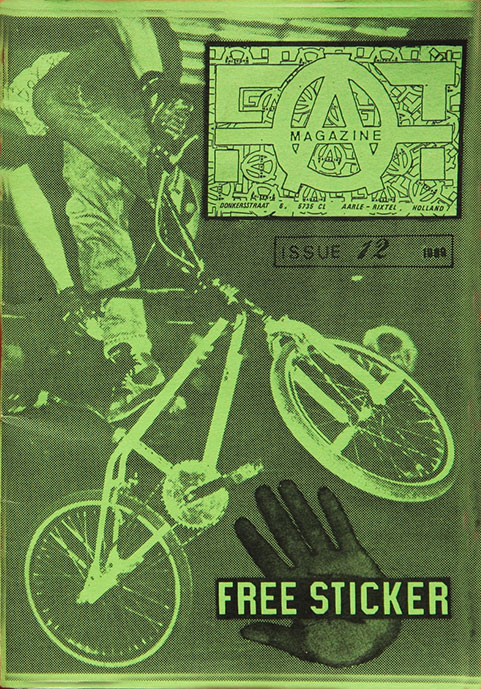 Issue 12 had a green color. In the beginning we picked our color but after some issues we did not care. As long as it wasn't the same color as the previous issue it was okay. The cover photo on the green paper came out nice.

Issue 12 had the infamous Believe it, or not?! news section, a reader photo section and also an MBL concert report. We used to have some ramps at the end of our street that we set up differently all the time. It was our ghetto skatepark but it worked for us. We also rode our scooters there, see page 9 and 10.

RAD-LAME list, of course! Entered a Talent Show at school and won! One DJ, one rapper and me flatlanding on stage. We got a trophy and a day off. Sweet.

2 Hip King Of Nothing (Rotterdam) report where they stole my camera. Bad news it was. Free Dave Vanderspek Curb Dogs sticker in this issue. RIP Dave. Yes we rode fullpipes back in the day. 19 years ago in Lieshout. Take that.

Another road trip it was and we rode on carpet!!! That about sums it up. Read it page by page. You might even have a photo in it.

Going back in time with FAT-'zine issue 11. BMX Freestyle World's in Paris report. 1989. 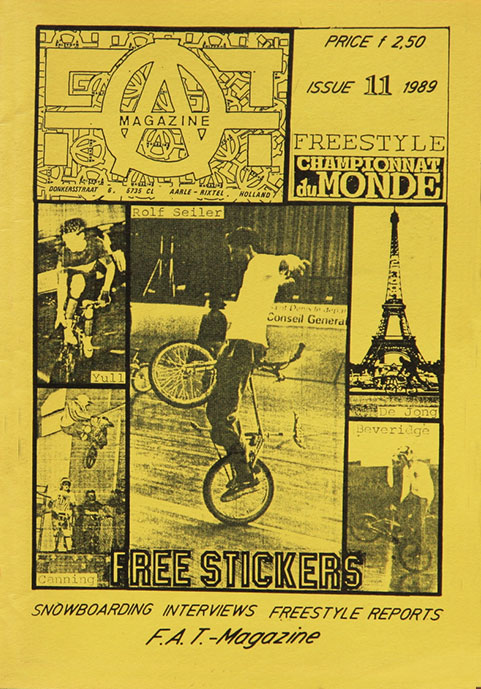 With 48 pages this was a skinny issue of FAT-'zine. We're still inthe year 1989 and we went to Paris, France for the BMX Freestyle World Championships. The pages got messed up a little. It was pretty tricky to put the pages in order and then Joop had to be on top of it too when he stapled the 'zines together.

Kees Lemmens wrote a report about a session in Den Haag, Erlangen, Germany was covered by Matt Pingel,and  Haluk did the Tropica contest. We had an interview with the very talented Scott Carroll (RIP), and Lars from Mars wrote a story about bikers and skaters riding together.

We drove over to Uden fr a street skate contest which was won by Dirk Winkelman.  We checked out De La Soul live in Eindhoven and this report was followed by the Paris World's article.

Stephan Prantl was interviewed (page 42-43) and we had an anti-drinking campaign sticker (Drank maakt meer kapot dan je lief is) in issue number 11.

Still a lot of stuff was put onto the 48 pages and like every week you get to flip through it page by page. 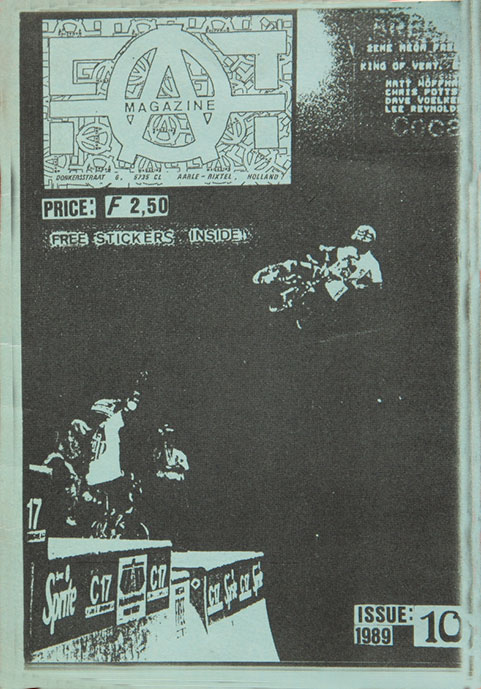 Lee Reynolds made the cover of issue # 10 of FAT-'zine. He had not seen it until recently when he found it online. That's why we're putting these things on the internet. Those who did not save anything from back in the day still have a way to flip through the pages; digitally.

It's 1989 and we made it to the Mega Free event in Paris. We started working the "press pass scam" to get into places for free and to get backstage. Paul brought a suitcase, long jacket and a baret to impress the security guards and it worked. When he opened up the suitcase backstage his bottle of Coca Cola and bag of chips rolled out, but he was in! That game never stopped.

Back to the issue:
Carl Inkpen reported from a competition in Farnham, UK, Pingel went to Rom skatepark.

There was no Photoshop back then but there were scissors and glue to make a double air on page 15-16. We traveled to Roncq, France for a contest and had a good time as usual.

Our local rap group was called Divorze, read the interview on page 22-23. Lars From Mars (BMX Masters MC) wrote another story for FAT and we interviewed Eric Fischer.

If Shaun Allison rings a bell you must have been interested in the UK street scene back then. 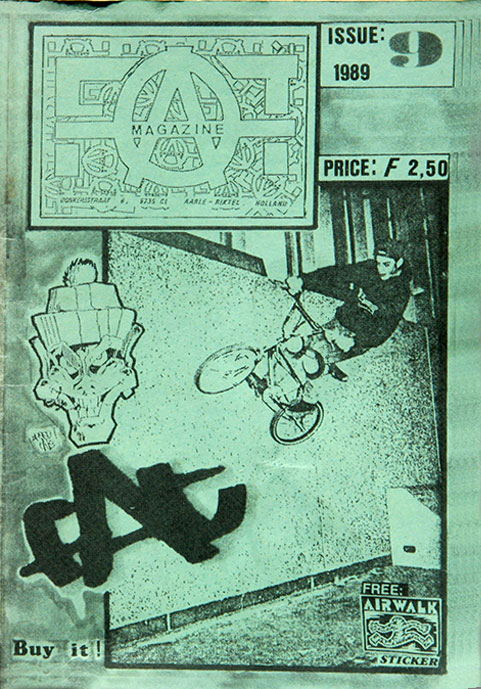 Did you ever have a cover of a magazine? Yes I did, FAT-'zine issue 9 right here. Putting yourself on the cover is pretty lame but what the heck, make your own (maga)zine and you have that control too. The photo was taken at an event in Amsterdam and "street riding" was a new thing.

We got plenty of cool artwork again from our friends at school. Somehow they never got caught. The StokeBros sent over a few pages and again we brought the news in the Believe it, or not!? pages.

Issue number 08 of FAT-'zine. Use the link and flip through the 'zine page by page. 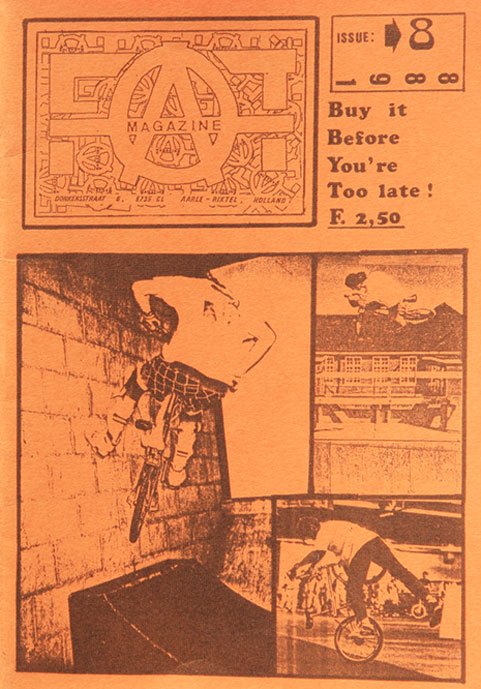 Frans Swinkels and I went to France this time for a contest in dad's Lada. The Germany posse made it too. Paul went to see a MDC/SNFU & Afflict show in Eindhoven.

Dave Vanderspek died in 1988 which shocked everyone. Lars from Mars wrote down his thoughts on a rainy and sleepless night and sent it in. It showed up on page 18.

Pingel went to England and visited the Chingford ramp. Ralf Maier reports from a contest in Bern, Switzerland and Albert Moonen went to the 2-HIp King of Vert in Washington DC and brought us all the latest news and gossip. Back in the day there was no internet guys!

Issue 8 had a Joe Johnson interview. On the question "What do you hate" he answered: "When I am staying at Dennis McCoy's house and I have to fix his bike for food." Haha.

We took another trip to Amsterdam with the Divorze posse to visit a concert. This time RunDMC, Public Enemy and Derek B and DJ Scratch. Yoyoyo! Matt Pingel itw too and the RAD-LAME list. 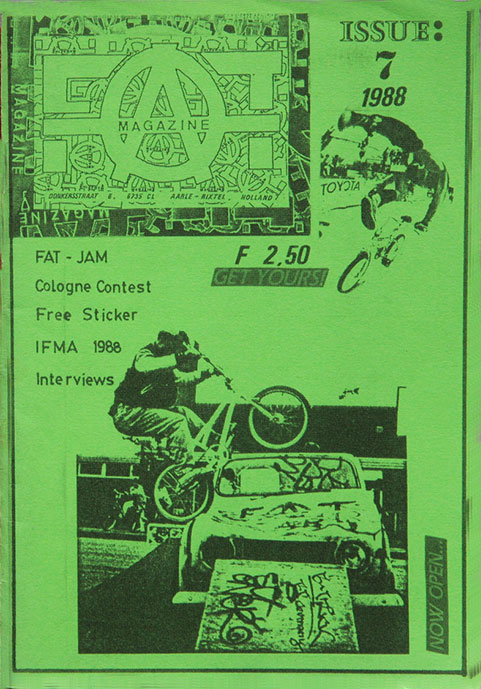