You've always traveled a bunch, but now you've taken it to the next level. How many dyas have you spent on the road in let's say, the last 12 months?
Ryan: I would say at least six of the last 12 months I have been traveling. I recently moved from Pittsburgh, PA to Portland, OR and took a month to drive across the country. Also, in the fall I was gone for 3 straight months camping and riding. So that's 4 months in those two trips alone.

Okay, you do ride a bike, and are pretty good at it but we're gonna go into the travel hobby a bit here. What sort of tent do you have? 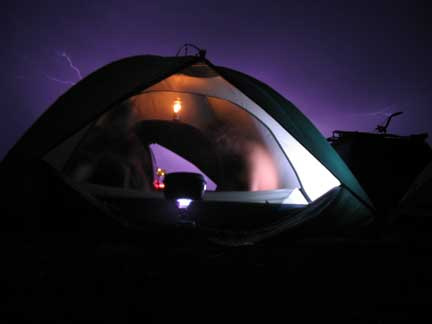 Ryan: I have a 2 person dome tent made by REI. It's a three season tent so, it's perfect for what I need--no winter/snow camp trips right now! It is great for one person and gear inside but, you have to snuggle up to get 2 people in there.

What's your cooker look like?
Ryan: It's an MSR pocket rocket. The "stove" threads on to the fuel canister and supports my titanium pot. Titanium is lighter and boils water faster. 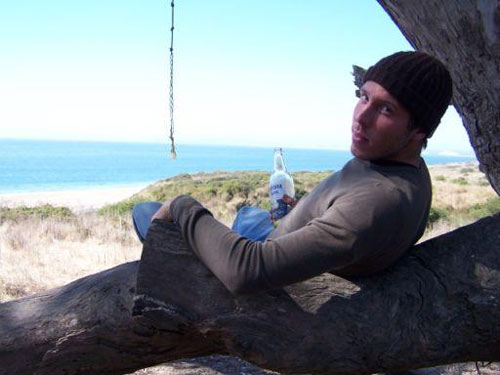 Do you prefer sleeping in the car, at a friend's couch or on the inflatable mat in your tent?
Ryan: I will sleep anywhere, anytime--I'm not sure if that's a desirable quality or not!? I really like cool nights in my sleeping bag so, I guess I'd have to say in the tent.

Has BMX taught you how to deal with strange situations?
Ryan: I would have to say yes. Just to stay calm and think it through. Unless it's something really crazy and then I think your instincts kick in and do the work. 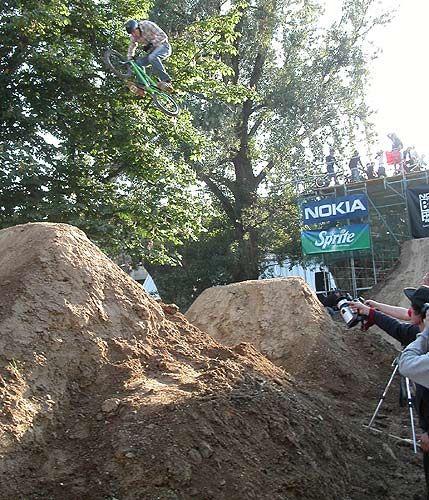 What animal has kept awake during your trip?
Ryan: When I'm away from home I bring my Ipod to sleep with. That way animals don't bother me; whether it's just some cricktets or people snoring.

Have you met any unfriendly animals?
Ryan: I do have a crazy animal story. On my 3 month tour of the US and Canada last fall my friend Nick and I were hiking in Northern California near the coast. We heard at the park ranger's station that the Elk were in Rut (mating migration season) and to be on the lookout for overprotective, horny Elk that will surely run you down if you cross their path. We had hiked into our site the day before, spent the night, and were on our way out. The trail was narrow and getting steeper; a lot of the single-track was twisting/turning therefore you could not see far in front of you. Nick was in front and stopped dead in his tracks. By that time I had seen why he didn't want to walk any further. A huge elk was standing 10 feet away with nowhere for us to go. The beast tried to flinch us by a fake charge towards us. We kindly backed away and regrouped, but not before we snapped a couple shots to document(silly tourists!!). After we waited a few minutes and discussed our options, we went back to where he was and thank God he was gone! 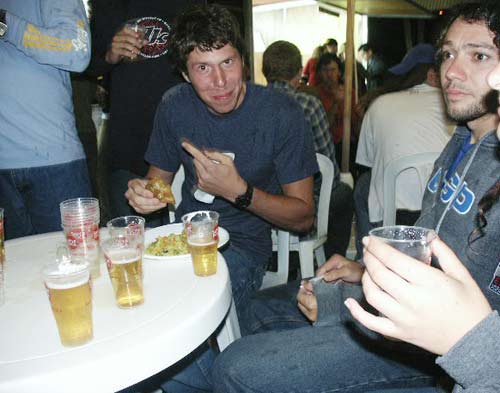 Okay, I believe you're a vegetarian, how do you survive when you're lost in the forest and there's no food left?
Ryan: I hate to take this question too literally but, the real problem is water. Most of the food I carry requires water to cook with (it saves weight and is non-perishable). 2 hikes this year I came dangerously close to running out of water with many miles ahead. Once it was very hot and dry so, the creek on the map was slowed to a trickle out of some muddy ground. The other time was on a hike to the summit and traverse across the mountain, there are obviously no creeks at that altitude so your only hope is a lake.

Could you kill an animal?
Ryan: I really don't think so. That is one of my reasons for being vegetarian. I couldn't go through the process of killing an animal and cleaning/preparing the meat.

What's an item that you couldn't do without on your trip?
Ryan: The only luxury type item I bring while hiking is my Ipod. Some of the best times I've had are staring into a fire with some tunes playing.

How do you get around anyway? and with whom?
Ryan: Portland is very bike friendly so it is very easy to ride everywhere. I have an older Bianchi road bike that makes it easier. It seems like the only time I am in my car is to ride BMX. I have a Volvo station wagon (estate car for those Brits) which is a road trip machine, soo much room for everything.

What places have you ridden at lately?
Ryan: I've been going to the trails in Salem, OR. I've been helping out trying to get the trails running before it gets too dry to build. I've ridden a few concrete parks here-Oregon City, West Lynn. There are a lot of parks in the area that I haven't been to yet. 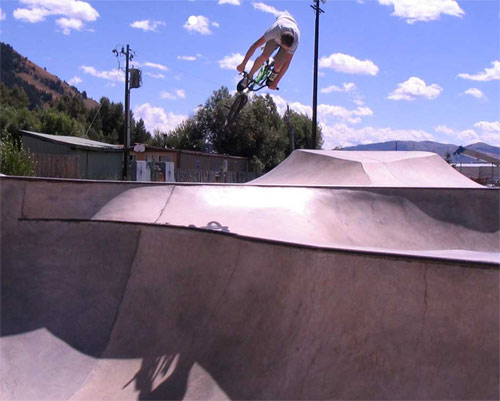 What riders have you visited?
Ryan: On my trip to move to Portland I stopped in Alabama to ride with Seth (Kimbrough) and Corey (Martinez); Hung out in Austin,TX with my brother and rode with Joel Moody, Morgan Wade, and a crew at 9th street; Oklahoma I rode with Mat, Steve Swope, and Jeremie Infelise; I stopped off in Denver to stay with Leif and ride for the weekend; Salt Lake City I visited my good friends Jon and Nick-we would snowboard in the day and ride bikes at night with ELF and Cameron Wood.

Did you bring a laptop?
Ryan: Yeah, along with my entire life crammed into my car! If my car would have been stolen I would have had nothing except the clothes on my back. 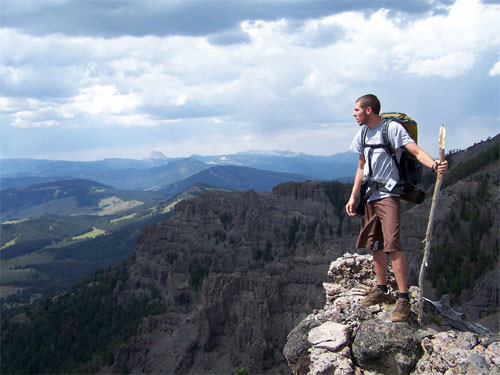 Where are you now answering these questions?
Ryan: In the kitchen, Portland. I gotta give a shout out to my roomies Adam and Tonka (Adam's dog) for being great people to live with!

Are you having the time of your life?
Ryan: Absolutely. I've been very fortunate in my life to see as much as I've seen. BMX has been a huge part of it.

When's your next contest going to be?
Ryan: The CFB in Oklahoma. It was soo much fun to have everyone together last year in the home of Hoffman Bikes- I can't wait to do it again. 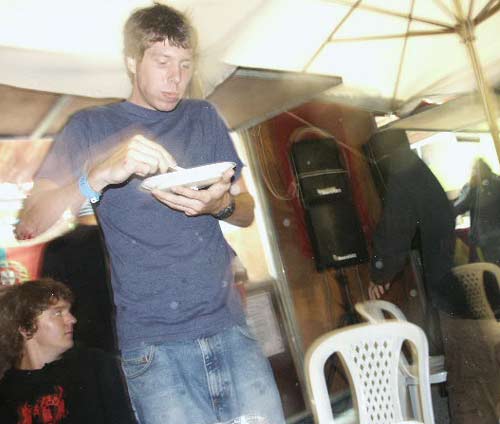 Any euro travels this summer?
Ryan: Yeah. I'm going to try to make it to the Rebel Jam and Backyard. I'll more than likely do solo trips after those places too.

Is it back to the local bike shop for some work soon? Ryan: I haven't found a shop to call home in Portland. I've not been impressed with the shops I've been to. They have not been very friendly at all--not even a hello when I walk in the door. Except Goods, but I don't think they're hiring! I have been doing tree transplanting and landscaping with Bruce Crisman to make some extra change.

Last words: Thanks to FatBMX for these great questions. It was fun to relive the memories of my trips. Thanks also to my sponsors Hoffman Bikes, Target, Right Guard, Snafu, and Formatiks. Lastly to my friends and family for all their love and support.

More in this category: « Tom Haugen interview Lance Mosley interview »
back to top