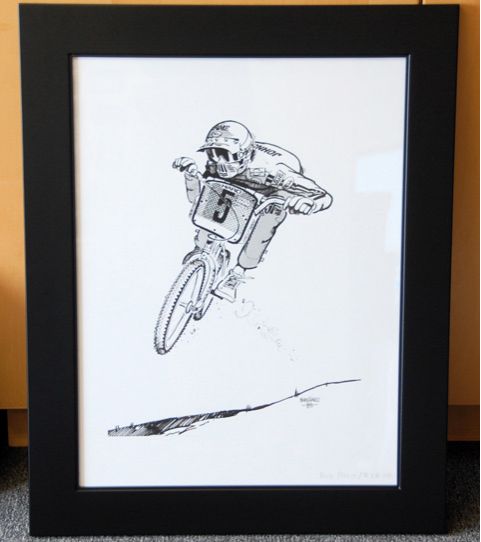 As many of you know, Dylan Dean is holding a fundraiser for former BMX pro Tara Llanes who ended up in a wheelchair after a nasty crash. Though most of the items are based around the sport of MTB, Dylan did receive a couple of items that he's going to add to the EBAY Auction. One such item is the BOB HARO One-of-a-Kind Drawing. There is nothing on the ebay auctions stating that it's for the Tara Llanes Fundraiser. Dylan assures you, ALL PROCEEDS GO TO THE TARA LLANES 'ROAD TO RECOVERY' FUND. Dylan had issues with ebay removing his listings because he said that it would benefit the fund. He just wants someone who would appreciate this item to win it.

More in this category: « DC TEAMS WITH FAMED FRENCH DESIGNER AGNÈS B. FOR A LIMITED EDITION DOUBLE LABEL™ PROJECT AND ART SHOW FORWARD 3 TO BE HELD IN PARIS AND NEW YORK WELCOME TO 2017: Benefit Art Show for Mullaly Bikepark @Tendertrap »
back to top