Written by Bart de Jong
Read 7398 times
We're talking about Superstar, the French BMX company here and not Ice Money...... Here's some info brought to you by Med:
- Superstar : Dominic Biro (USA team rider) is as good on his bike as in front of a CNC machine. He made and ride an interesting front hub that we may produce in the future. Note : Dominic is good in tech/mech : he is into drag racing car and prepare his car and engine by himself.
- Superstar : in UK, Guy Terry will be more than a Superstar rider. From now, he is the link between Superstar, Padded Cell (UK distributor) and the riders.
- Superstar : Tom Blyth is the first newly added rider in the UK team. You'll hear from Tom very soon.
Read more
News

In the works is a little friendly tour around the South of France with the international team.

We would like to welcome back wethepeople as a suppporter of FATBMX!

Written by Bart de Jong
Read 3793 times
- St-Martin : Simon O'Brien joined the team. We are now talking with him to design his signature frame and signature handlebar.
- St-Martin : beside Simon's frame, we are also working on 2 other prototype frames.
- St-Martin : our distributor in Hungary (Görb-X / Harlee) added László Elek to their team. László is known as the best style rider in Hungary. Up to now, he never went out Hungary. 2006 will be his first European year.
- St-Martin : Chris Böhm (Germany) won the Last Session 2005 contest. He'll be at the Circle Cow contest in France, mid February.
- St-Martin : Available in april 2006 : 7075 pegs, 38 mm O.D., 115 grams each.
- St-Martin : Our distributor in Japan (Dirty Bike) added Miura Hirokazu to their flatland team. Nishikawa "Taka" Takahiro and Misawa Shintaro were already in the team in 2005.
Read more
News

Written by Bart de Jong
Read 3987 times
The upcoming Mutiny DVD clocks in just under 30min and has bonus sections from the pro and bro teams giving you 20min more of pure video-tainment for only $15.95! Two videos for the price of half a video? That's insane. What's even crazier is the hidden wreck section you'll never find on the DVD. Gnar. To view the trailer, [url=http://www.mutinybikes.com/video/mutinydvd.mov]click right here[/url] or go to the [url=http://www.mutinybikes.com]Mutiny Bikes website[/url] to download the trailer on your I-pod video.
Read more
News

Flatland during the Metro Jam in Toronto, Canada.

Written by Bart de Jong
Read 4496 times
The Canadian Freestyle Organiztion (CFO) Presents the "Flatland's Unlimited" Contest Series Round 1 in Toronto, Ontario, Canada. The first event of this new series will be held during the Toronto International Bicycle Show from Friday March 3-5, 2006.

“Our latest partnerships with MasterCard and Slim Jim demonstrate the breadth of the Dew Action Sports Tour’s appeal to the corporate community as a marketing platform,” said Wade Martin, General Manager of the Dew Action Sports Tour. “Our newest partners will support their initiatives with innovative onsite activation that will enhance fans’ experiences and promotional programs through their respective retail channels.”
Read more
Interviews

What has daddy Bestwick been up to lately?
Jamie: Well apart from being a dad to my fantastic son Samuel, alot of traveling, just got back from the etnies photo shoot in CA, working on a few new ventures that I am passionate about, and trying to get a new bike together.  (ed note: He's off GT)

Have you moved your family over to England permanently?
Jamie: No they are here with me in PA at the moment, I don't want to be too far away from them, as the contest season is coming around again, we are just commuting back & forth at the moment, but still spending the majority of the time here in the States. 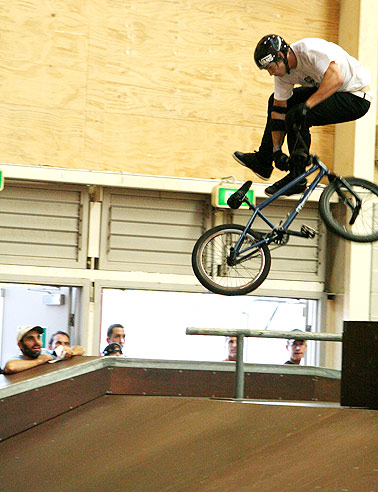 Pro Park Results Monster BMX Games, Sydney Olympic park, Australia.
1st Colin Mackay
2nd Luke Fink
3rd Kym Grosser
Fuel TV overall spirit of the BMX Games winner was Colin Mackay
Some highlights:
-Colin Mackay 180 tailwhip to fakie off one of the ledges
-Kym Grosser nothing to tailwhip followed by wallride to footjam nosepick. Also footjam nosepick over the "eagles perch"
-Luke Fink 180 handplant over the perch
-Dave Dillewaard icepick on the perch to 360 off
-Shane Conlon and another rider both tail tapping the perch at the same time during pro warm up.
Read more
Freestyle

Flatland results from the BMX Games in Sydney. 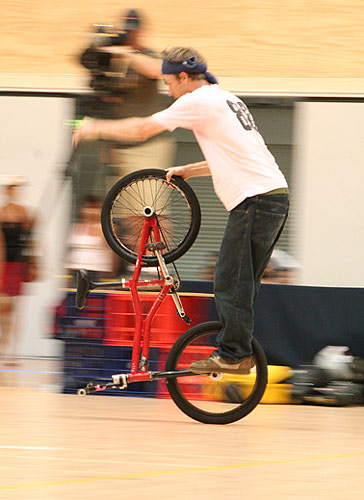 The BMX Games over in Australia had everything; Vert, Mini, Dirt, Park and FLATLAND! Flatland went like this for pro. The top four battled it out in their own jam.

The $ 200,= dollars for the flatlandaustralia.com bomb trick went to Simon o'Brien

When did you start Colony BMX?
Clint: Well it’s been an idea of mine for quite some time now. But I guess it all started officially around the beginning of 2005. That’s when it started as a registered company.

Are you the sole owner or do you have business partners?
Clint: No, I have Chris Harrison (owner of triplesix distributions) has my 50/50 partner. Chris is great with the business rules side & artwork & I take care of the product design & team side of things. I mean we both all do it together as a partnership should be.
Read more
Page 5407 of 5523