Interview with Ryan Guettler, the winningest rider of 2005.

You've had a killer year in 2005, did you see that coming?
No way. It was by far the best year ever for me, I guess I just got over being nervous riding against guys like Mirra. As soon as I got over that, I started riding more in practice instead of just sitting there looking at everyone else.
Read more
Interviews

Ben Townley is a 21 year old motocross rider from New Zealand. He moved to Europe at an early age to do what he loves to do. He got what he was after in 2004 (world champion in the 125 cc class) and Ben is preparing for his first season in the USA right now. With the same trainer as Ricky Carmichael and bikes that seem to win every championship (Pro Circuit/Monster Kawasaki 250f), Ben could actually turn some heads in 2006. BT is an occasional BMX-er and we decided to send some questions his way. Surprisingly we received the answers the same day.
Read more
Interviews

Matti Roese from Germany has taken things in his own hands. Instead of talking about it, Matti makes it happen. With the help of some friends he has started organizing contests and started doing flatland shows and more. Time to check in with FELT's MR. What made you decide to start organizing Flatland contests? Matti: Last year, by chance Jens Werner ( Manager of the Mellow Park in Berlin and the nicest person in Bizznizz) and me went to a meeting about the possibility to organize an event in the famous "Palast der Republik" (former DDR politician headquarter).
Read more
Interviews 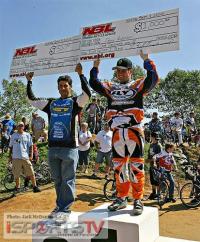 Donny Robinson has been racing BMX forever. Even in the expert classes, Donny was the small kid that was damn fast. When he turned pro a few years ago he had to race the guys that he had looked up to for so long. Donny tried hard but crashed hard a couple of times too. In fact, his crash at the 2004 UCI World's in Valkenswaard was one of the gnarliest crashes I've ever seen. He got up and kept on racing. That's Donny's attitude, never give up. His determination paid off in a pro title this year by winning the NBL Elite Cruiser #1 Title. How do you feel about your win? It’s obviously big for me. My ultimate goals are winning such titles. My whole career has been hard so I have to start somewhere and mentally this is good for me.
Read more
Interviews 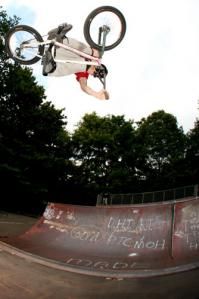 At one point my internet provider announced that someone would come by to swap the old modem for a new one. One evening the Chello man showed up at the door and when I opened it up, it was Rik Jurjus. Rik is a Dutch freestyle BMX addict who shows up at all events. You might not know who Rik is, so we asked him that question for you. And more...... Who is Rik? Just a simple guy trying to have some fun. Where do you live? I live in Arnhem, a small city in Holland What do you do?
Read more
Interviews 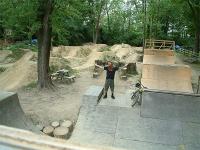 How cool would it be for people to come in your backyard and build some ramps. Well, that's happening in Matt Bischoff's yard in Ohio with the RedBull BuildOff. Confused? read on. And while we were at it, we checked on Matt's Failure Bikes situation too. -So what's going to happen in your backyard with that RedBull thing? Basically, I thought it would rule to do a contest where ramp builders, which to me is an art form, would have a 3 day period to build ramps. I approached Wessel and we came up with a list of builders to participate.
Read more
Interviews 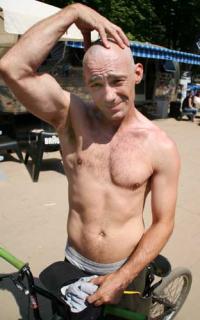 Paul Roberts is the voice of BMX. His passion has brought him where he is today. And he's everywhere. Paul knows BMX, Paul is BMX and having an MC at the contests that is that into it is a good thing to have. MC-ing is a tough job. It usually means you have no voice left at the end of the weekend. You need to make the crowd get into it. You can try that by acting like a "koekwaus" but Paul doesn't need to put bunny ears on his head and change closes three times a day to entertain the crowd. It's the voice that matters and when Grotbags is on the mic when you arrive at a contest, consider yourself lucky because he's the man for the job. How many everts do you do a year and which ones? Paul Roberts: I try to do all the ones that I didn't get fired from last year. I really do whatever I'm asked. I always do Ian Morris' contests, Jay Miron's Metro jams and last year somebody was foolish enough to let me do the big American comps suchs as the X-Games, the Gravity Games, Triple Crowns, it was nice. It means that I don't really need to get a real job.
Read more
Interviews 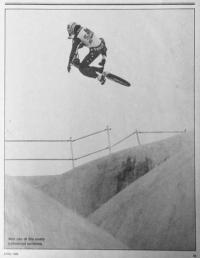 'Tinker came over to the UK for a 24hr mountain bike race and the UK magazine, What Mountain Bike, caught up with him for an upcoming profile for their August 2005 issue. They talked 20in as well as 26in and here's what they didn't have space for...' Tinker Juarez is a name that echoes all the way from ‘Back in the Day’; he was a ripper both on the race track, where he became the youngest pro of the time aged just 15 in 1975, and away from the dirt and on the concrete of the skatepark. He was crowned the first ever King of the Skatepark by Bicycle Motocross Action magazine back in 1980 and helped inspire a generation of freestyle riders along the way. He was eventually inducted into the ABA BMX Hall of Fame in 1993, seven years after he quit BMX for cross-country (XC) mountain bike racing. He took his trademark hard as nails dedication to training from BMX and applied the same ethic to mountain biking, becoming one of the world’s best and a mountain bike legend, winning silver at the World Champs in 1994, and a two-time Olympian at both the Atlanta and Sydney Games. In 2001 he was inducted into the mountain bike hall of fame and quit XC and got all masochistic by taking in 24 hour solo mountain bike racing.
Read more
Interviews 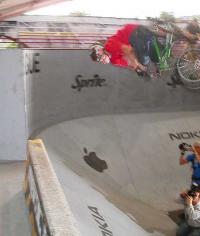 If you haven't heard of Morgan Wade, you will soon. FATBMX put the microphone in front of his face in Prague and the Texan started talking. Morgan is one of the new "hot guys" that will be in the picture for years to come. Might as well check in with him now. Is this this your first time in Europe? Morgan Wade: It's my second time in Europe but my first time riding bikes over here. Where did you go on your first trip? Morgan Wade: I went to Italy for two weeks on a vacation with my mom and brother. What's your first impression of this European BMX freestyle contest? Morgan Wade: I love it, it's awesome over here. I enjoy it.
Read more
Page 247 of 249